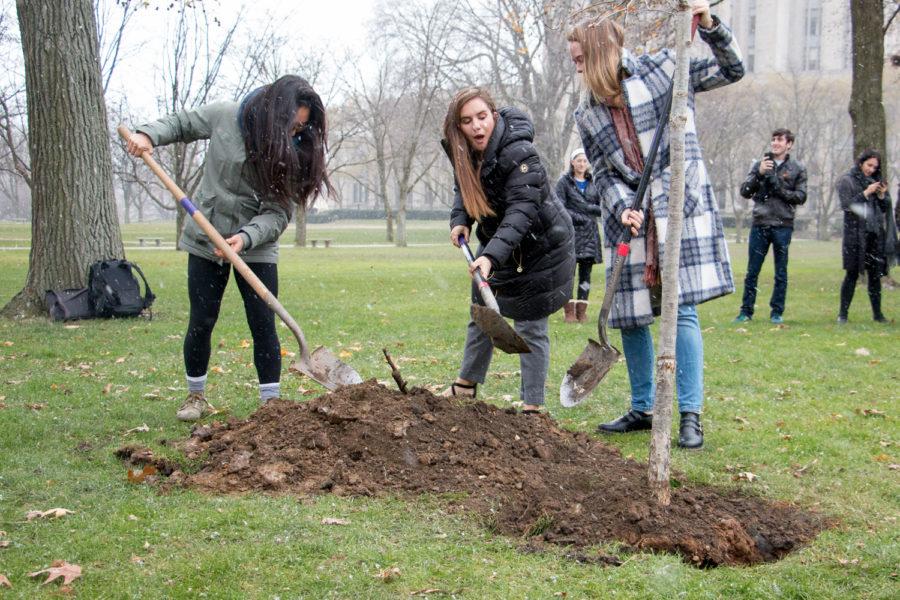 By Elise Lavallee and Caroline Bourque

When Ward Allebach took the podium — immediately slipping a Christmas-themed Hawaiian shirt over his button-up and placing a Santa hat on his head — he described what he had in mind for a sustainability showcase for projects “past and present.”

“We were calling this the whole ‘ghost of sustainability of past, present and future,’ and yesterday I had this great idea of doing a skit,” the geology and environmental science professor said. “With Ebenezer Pitt up here, and the ghost of Chancellor [Mark] Nordenberg haunting him, you know — with the chains on and all.”

Allebach’s hypothetical skit served as the opening for a presentation of the University’s plan for sustainability at the Student Sustainability Showcase Thursday afternoon. A crowd of about 40 attendees gathered in the O’Hara Student Center Dining Room for the event, which was sponsored by PittServes, the Office of Sustainability and the Department of Geological and Environmental Sciences. During the first half of the event, student groups presented their own semester-long sustainability projects leading up to the University’s presentation in the second half.

The committee responsible for researching and implementing the sustainability plan is comprised of students, faculty and staff who advocate for sustainability on campus. Rich Heller, co-chair of the stewardship portion of the committee and current senior electrical engineer of the Office of Facilities Management, presented the plan at the showcase. Heller started the presentation by giving a brief history of Pittsburgh.

“People having been living in this valley for 19,000 years, and this University has been here for 230 of those years,” Heller said. “We’re hoping this plan gives us another 230 years, if not more.”

“Now that we have the plan, the first step will be asking volunteers to take responsibility for each of the goals,” Heller said. “It’s not just facilities management — it’s all the departments on campus.”

Outside the University’s efforts, students at Pitt are working toward sustainability projects of their own. The showcase featured presentations from different student sustainability groups about projects they have been working on throughout the year, both in and outside of classes.

The first group to present was Eat Mind Full — a group of four students aiming to provide affordable, nutritious food on Pitt’s campus. Sydney Villasis, a group member and senior environmental science major, explained the need for change in the community.

“Because we are college students in a food desert, not having a grocery store around isn’t very realistic,” she said.

Though Oakland has several small grocery stores, fresh produce has become more difficult for students to purchase after the Forbes Avenue IGA closed last year. The University has announced plans to address the issue with a new grocery store in place of 7-Eleven next semester or in the summer.

Eat Mind Full is partnering with the soon-to-be-built Pitt grocery store in an effort to give students access to fresh and frozen goods in a space where sustainable design can be implemented, in ways such as promoting the use of reusable containers by offering bulk bins.

Senior chemical engineering majors Nikhil Malik and Anthony Myers — from the student group Blitz the Lead — talked about their efforts to inform people about lead in Oakland’s tap water.

A 2016 Pittsburgh Water and Sewer Authority study found that more than 10 percent of Pittsburgh’s water tested above the Environmental Protection Agency’s action level, triggering a program to replace some of the City’s lead pipes. PWSA inspections have not located any lead pipes in Oakland so far, but Blitz the Lead wants to help residents throughout the City test for themselves.

Working with Pitt’s chapter of Take Back the Tap and Design for America, Blitz the Lead has helped to implement a water testing center, which will be located in the Chevron Science Center. It will be open to Pittsburgh residents who want to bring their water and have it tested. The facility, according to Myers, is set to open within the next couple of weeks.

As a follow-up to their current project, Blitz the Lead wants to help fund filters for students living off campus.

Other groups presented on issues such as reducing the clutter in the streets of Oakland, encouraging restaurants in the area to recycle and suggesting a plan for a new outdoor gym and meditation garden on upper campus.

Among the crowd was Chelsea Huddleston, a junior environmental science major and director of the Student Office for Sustainability. She is hoping to help develop a user-friendly website that can help connect students groups with University resources to meet their shared sustainability goals.

“By pinning down goals and objectives we can grasp which players to contact and say ‘if we want to get here, this is what we need,’” Huddleston said. “This will make sustainability more accessible to both students and staff.”