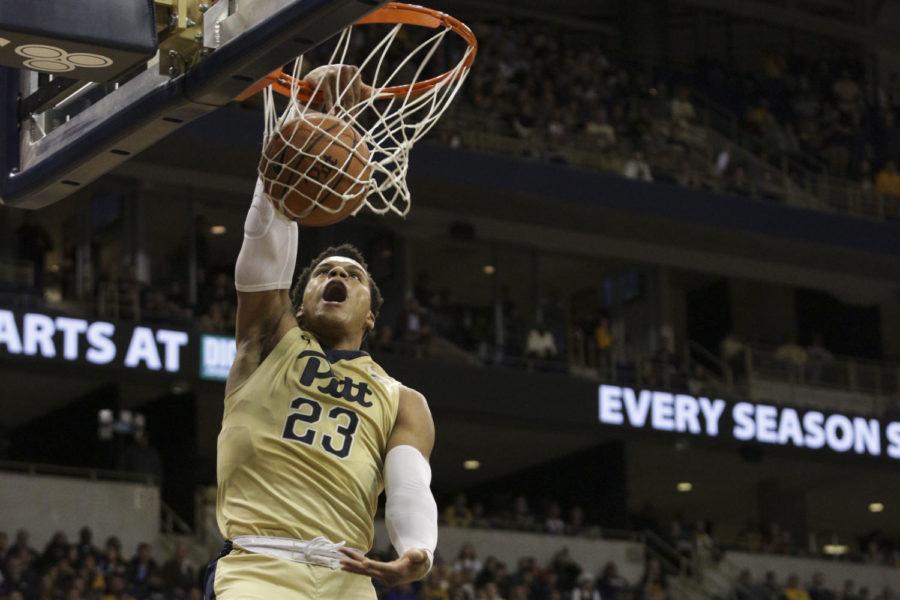 First-year forward Shamiel Stevenson, who finished with 12 points in Pitt's loss to WVU, dunks in the first half. (Photo by Thomas Yang | Senior Staff Photographer)

Down 18 at the half, Pitt men’s basketball nearly mounted a second-half comeback, but West Virginia’s aggressive defense held the young Panther team in the final minutes.

Though Pitt came within two points with six minutes remaining, the Mountaineers pulled away to avoid the upset, winning 69-60 in Saturday night’s Backyard Brawl at the Petersen Events Center.

Despite it being a home game for the Panthers, the stadium was filled with vocal West Virginia fans, who made their presence known by chanting a certain popular anti-Pitt rhyme.

Sophomore forward Lamont West got the Mountaineers off to a hot start by sinking his first two 3-pointers, but Pitt first-year guard Khameron Davis managed to kill WVU’s early momentum by earning a trip to the foul line. He nailed both shots to make the score 6-2 early on.

Sagaba Konate — West Virginia’s 6-foot-8 center — made his presence known quickly, blocking two Pitt shot attempts around the rim. The Panthers struggled with the Mountaineers’ defensive pressure — after six minutes, they had made just one of eight shots from the field and committed four turnovers.

Despite their shooting woes, Pitt kept the game within single digits by making free throws. They trailed 15-6 after eight minutes of action, with four of those points coming from the free throw line.

The Panthers’ poor shooting eventually led them to trail by double digits, 22-10, with 10 minutes remaining in the first half. But Luther found himself wide open for a 3-pointer on Pitt’s next possession and knocked it down to trim the deficit back to nine.

Carter made one of two free throws, then two more on the Mountaineers’ next trip down the floor. After hitting yet another three, Carter had gone on a 12-0 run by himself. By the time the onslaught was over, the Panthers trailed by 20 points, 38-18, with five minutes left in the first half.

First-year Pitt guard Parker Stewart tried to give his team a spark off the bench with two minutes remaining in the half. Stewart recorded a steal and a 3-pointer to make it a 15-point deficit, but Carter answered back with a three of his own — his third of the half.

Pitt did outplay its opponent in just one area — free throw shooting. The Panthers made 15 of 21 first-half free throws, compared to five of seven from their opponent.

Junior guard Jared Wilson-Frame found his shot out of the gate in the second half, accounting for seven of the Panthers’ first 10 points as Pitt narrowed West Virginia’s lead to 14 points, 49-35.

Luckily for the Panthers, West Virginia’s Carter picked up his fourth foul six minutes into the second half. Not wanting his best player to foul out, West Virginia head coach Bob Huggins sent Carter to the bench. Pitt took full advantage of the opportunity — after consecutive 3-pointers by Carr and first-year forward Shamiel Stevenson, the Panthers trailed by just six points, 56-50, with 10 minutes remaining.

In an effort to stop Pitt’s 9-0 run, Huggins chose to put Carter back into the game. But the Panthers were ready, and the move did not stop their momentum. A four-point play by Carr brought Pitt within two points, trailing 61-59 with six minutes left.

But the Panthers would go on a scoring drought over the next three minutes, scoring only one point — a free throw by Stevenson — while the Mountaineers scored six.

Pitt failed to make any field goals down the stretch, while a layup by West Virginia senior guard Daxter Miles Jr. provided the final nail in the coffin, putting the Mountaineers up 69-60 with 1:39 remaining. Stewart and Luther missed 3-pointers in the final minutes as time expired.

Luther finished as Pitt’s leading scorer with 13 points, as well as 12 rebounds to make a double-double. Stevenson and Carr were second with 12 points each. After committing 10 turnovers in the first half, the Panthers finished with just 14 turnovers for the game — an encouraging sign against a West Virginia team renowned for its defensive pressure.

“I couldn’t be more proud of my team and their effort,” Stallings said. “I’m just sorry to our fans that we couldn’t quite get over the hump.”

Pitt will play McNeese State at the Petersen Events Center Saturday, Dec. 16, with a start time of 2 p.m.