So long to Saturday finals 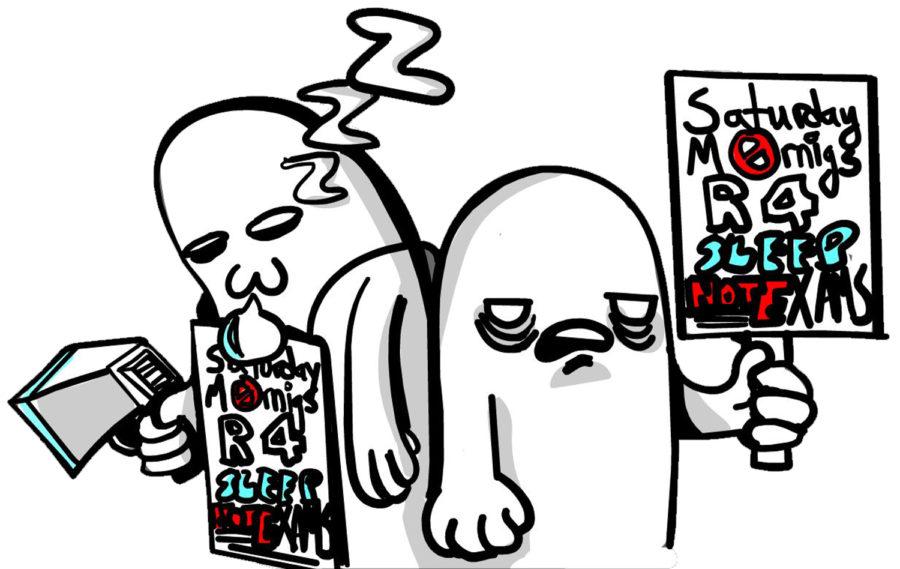 Opening PeopleSoft and finding your final exam dates is like opening your presents on Christmas — sometimes you’re elated, other times you’re more than a little let down.

Discovering all your finals are on the first days of finals week, or earlier, is a feeling of pure joy. It’s like getting a new gaming system or a mythical Red Ryder BB gun. Seeing an early morning Saturday final, on the other hand, is the equivalent of a hefty sack of coal.

But unlike the meritocratic system that’s supposed to operate on Christmas, where you earn your presents based on being “naughty” or “nice,” the layout of your finals week seems more random. Beyond the frontloading of final assignments for liberal arts majors, who often end up with most of their work due the week before finals or at the beginning of the week, it doesn’t feel like your schedule has much rhyme or reason to it.

The Saturday final is one of the biggest nuisances for Pitt students as the semester comes to a close. Forced to stay on campus in perpetual boredom during finals week with only one exam Saturday, students are cut off from access to University services and unable to benefit from time at home. The Saturday final is a tradition that’s ripe to be abolished.

Finals week at Pitt is not a fun time. Students are overcaffeinated, sleep-deprived and cranky. None of these qualities lend themselves to a productive, upbeat or exciting campus. Too often, students with only late finals spend their free time this week in solitude in their dorms or apartments, as friends have already gone home for the break or are too busy studying.

During that seemingly endless week sophomore year in 2016, I envied my fellow students who got to leave early after finishing up their exams. They returned home to excited parents and siblings. I, meanwhile, returned to pointless YouTube videos and random Wikipedia articles, waiting for my late final. I was unable to return to employment at home or even spend time with my family because I was stuck at Pitt waiting for a final.

Students with exams earlier in the week — or before finals week altogether — might begrudge those of us who have exams at the very end of the week because of the extra time we have to cram. But oftentimes, we don’t using the time to study — and possibly for good reason. Research, including a 2012 study from the University of California, Los Angeles, shows much of the knowledge gained cramming during exams week doesn’t stick, so the extra time mostly goes to waste.

I was at least a little lucky in that I could leave Saturday afternoon to return home. One of my friends, unfortunately, had a Saturday 4 p.m. final. He was forced to wait until Sunday on a campus that resembled a ghost town — metaphorical tumbleweeds and all.

Of course, it doesn’t have to be like this. The days on end of boredom and solitude are simply pointless, and easy to resolve. I offer two potential solutions to Saturday finals. Pitt should either extend final exam hours Monday through Friday or take into account that not every professor and class will need a slot during finals week for an exam.

An extension of finals hours can be accomplished. Adding an additional slot every day during the week from 8 to 10 p.m. would be simple, requiring only that night classes cut their final exam session to end at 8 p.m. instead of 8:30 p.m. And while these classes would end up with less time officially, many exams during these periods already don’t run the full time they’re allotted.

When students pushed for an end to Saturday finals back in 2014, the University said its main concern was whether all classes would be able to get a slot for an exam if the week shrank from five days to six.

“We only have so many blocks in the grid that can work,” Daniel Stump, Pitt’s then-manager of course and class scheduling, said in January 2014. “That’s why we have a Saturday final — it’s just not possible to remove the Saturday finals.”

But it’s still possible for the University Registrar to assign finals slots in a way that more effectively condenses the finals schedule. Instead of automatically assigning final exam dates to every class, professors should request if they want a slot. I have taken 13 history classes at Pitt — only two had a final during finals week. Yet because every class gets a slot for an exam during finals week regardless of whether it’s used or not, all were assigned final exam dates. This has occurred in other classes I’ve taken, ranging from neuroscience to film studies.

These 11 classes without exams during finals week stole potential time slots from other classes that needed a final. Requiring professors to explicitly request a final would minimize the amount of dates that are assigned and will help create a shorter finals week.

These are reasonable changes that would greatly benefit Pitt students. We shouldn’t sit through a week of frustration and boredom at the expense of time with our family and potential earnings.

We don’t need reason to prolong the stress during an already demoralizing finals week. The Student Government Board and University administrators should work toward implementing these changes to finals week. Show the University community you can slay a beast we all loathe — the Saturday final.

Ben primarily writes about local politics and student issues for The Pitt News. Write to Ben at [email protected].