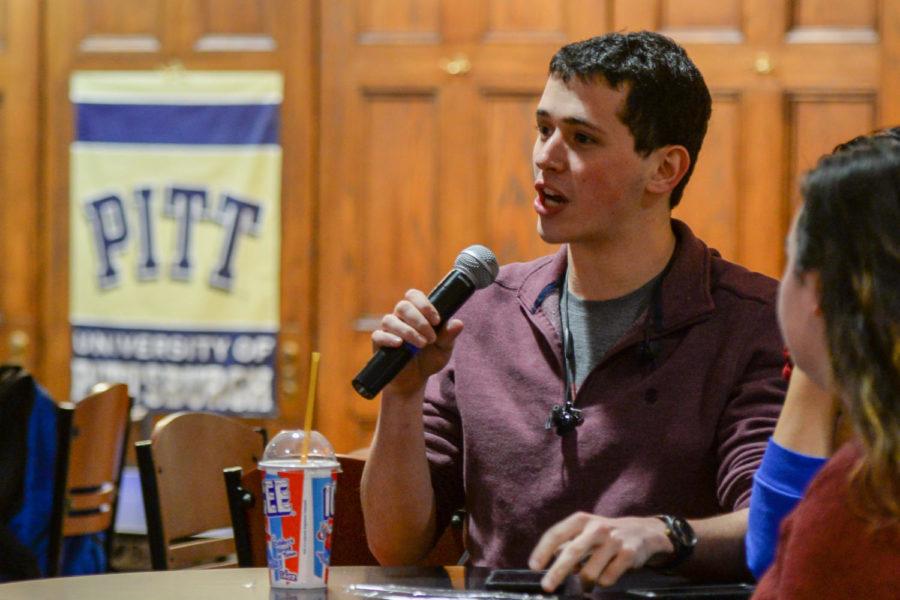 At Student Government Board’s first public meeting of the semester Tuesday night, SGB President Max Kneis introduced and read a resolution calling for the University to expand the use of open educational resources, such as PDF textbooks.

“[Textbooks are] just another added cost, so anything we can do to make college more affordable is a step in the right direction,” Kneis said.

Vice President and Chief of Cabinet Krish Patel co-authored the resolution with Kneis and Sarah Grguras, who is on the PittServes advisory board. Patel became interested in the resolution when Grguras, a junior environmental studies and ecology and evolution major, suggested it to SGB. The resolution cited the Office of Admissions and Financial Aid, which recommends students prepare to pay $772 for textbooks for the 2017-2018 school year.

Along with the resolution, Kneis appointed Patel as the Arts and Sciences undergraduate representative for the provost search committee following current provost Patricia Beeson’s decision to step down. Patel’s main requirement for the new provost is that they be someone who can connect the different groups at the University, like Beeson does now.

“[Beeson’s] very great with working with students and understanding our sides, and she gives a great perspective, bridging that gap between faculty, upper administration and students,” Patel said.

Elections Chair Anastasia Bodea Crisan discussed the progress preparing for spring SGB elections. As of Monday, the election committee has application packets available in the SGB office and is holding an information session about running for SGB today from 7 to 8 p.m. in the William Pitt Union room 837. At least one board member will be present to answer any questions attending students have.

“In the fall our biggest goal is just to get the word out there because our job this semester is, a lot of it is to increase voter turnout and that’s a lot easier when there are more people running,” Bodea Crisan said.

Last year’s election saw high voter turnout — double from the previous year. Two years ago, Bodea Crisan said there was little competition for board positions, which she connected to low turnout that year.

“When there’s no competition people don’t vote, so the two are extremely, closely linked together,” Bodea Crisan said.

To promote this year’s election and increase student involvement, Bodea Crisan said the elections committee will use stickers, flyers with running requirements, Snapchat filters and T-shirts.

“You can rely on other people to vote and just assume, ‘Oh you know I’m sure whoever wins will be the same,’ or, ‘I’m sure, ya know, it won’t make a difference if I vote.’ I know that these are a lot of common things people say, but honestly the truth is every single vote does count and every candidate does have unique platforms and unique initiatives,” Bodea Crisan said.

Chief of Staff Derek Arnold was absent at Tuesday’s meeting.