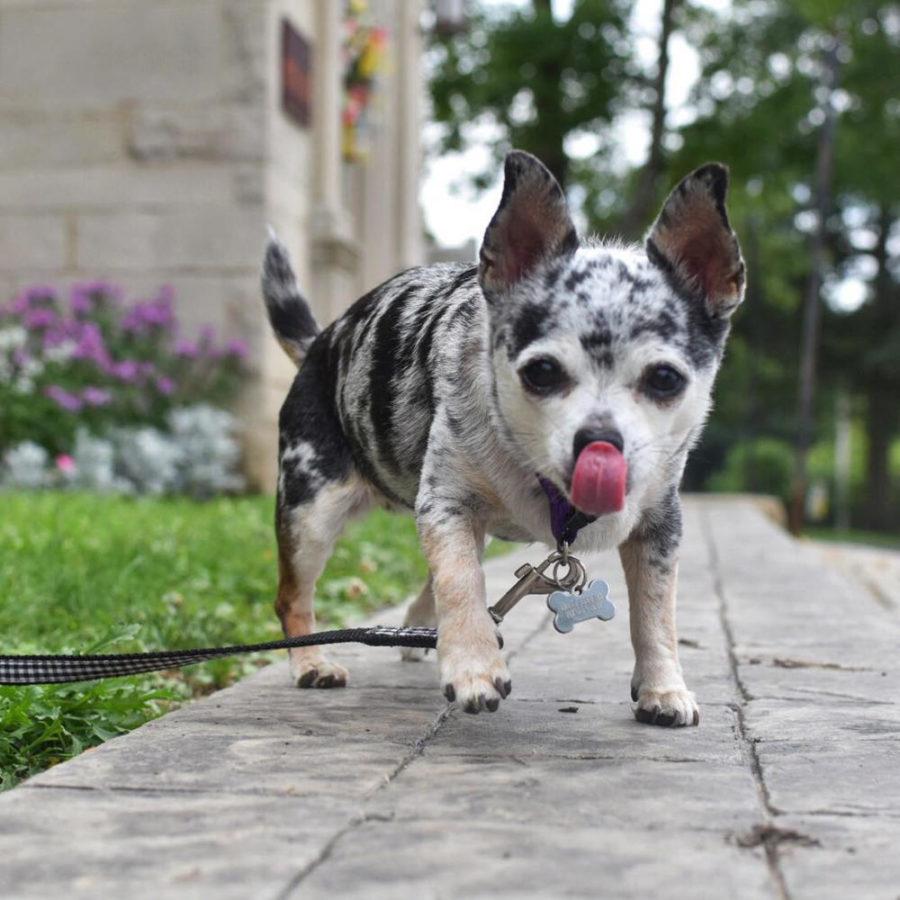 Lu-Seal’s silver dog collar reads “Don’t feed me, I’m on a diet,” reminding her admirers of the long journey she has overcome to be healthy and happy — even if they have to say no to her puppy-dog eyes.

As a 9-year-old abandoned chihuahua weighing a dangerously heavy 16 pounds, more than double the healthy weight of six to eight pounds, Lu-Seal was rescued from the streets of Pittsburgh with little chance of recovery. But with the help of Julia Morley — a Greenfield resident who received her undergraduate and medical degrees at Pitt — Lu-Seal has since inspired news outlets, social media users and pet campaigns through her story of rehabilitation.

When Lu-Seal arrived at Humane Animal Rescue after being found abandoned in the streets, employees quickly put her into an isolation room after realizing she had a kennel cough — a respiratory infection which affects dogs — and multiple injuries.

The pup’s various ailments included arthritis, torn CCL ligaments in her back knees and collapsed cartilage around the trachea — all issues stemming from her weight.

During her time at HAR, employee Kira Scheetz cared for Lu-Seal, admiring the little pup since she first arrived.

“I remember wanting to spend any chance I had with her, sitting in her kennel, playing with her toys or just cuddling,” Scheetz said.

At the time, Lu-Seal was too plump to get into her dog bed or walk even a few feet — she struggled to even move around her kennel, having to rely on the HAR staff. As time passed, Lu-Seal moved out of the isolation room and into a more interactive space, where she quickly acclimated, waddling from person to person with confidence in an eager search for affection.

“Someone said, ‘She looks like a seal!’” Scheetz said. “We all agreed and I suggested the name ‘Lu-Seal’ in homage to a recurring joke about a loose seal and the name Lucille on the TV show, ‘Arrested Development.’”

Morley, a resident physician in emergency medicine at UPMC, had been looking at the Humane Animal Rescue website for companionship, particularly from a large dog. With a dog she wanted to adopt in mind, Morley decided to pick some backups just in case — and Lu-Seal was among them. Once Morley met the chihuahua in person, she knew she had found the perfect dog.

“Lu-Seal was there and she had a really goofy picture on the website, so I wanted to meet her just to see,” Morley said. “When I met Lu-Seal, I had no idea about the medical stuff — I had no idea she was overweight, but it was very clear when they took her out of the crate.”

Knowing the long journey Lu-Seal had ahead of her, Morley decided to start an Instagram account to not only showcase her progress, but also encourage and teach other dog owners ways to keep their furry friends healthy.

“The Instagram community is really supportive,” Morley said. “As she has grown, she’s got a core fan base that is really enthusiastic about her and now there’s a lot of people that follow her.”

As Morley continued to track Lu-Seal’s weight-loss journey, more and more mass media companies wanted to cover her story. Starting with a small article featured in Pet Insider written by Morley herself, Lu-Seal’s story has since been covered by The Daily Mail and The Dodo. These stories have boosted Lu-Seal’s fame and social media presence to almost 13,000 Instagram followers.

Although she’s not always able to find time to update Lu-Seal’s Instagram feed manually because of her busy schedule, Morley finds ways to keep fans constantly in the loop. Using a post scheduler, Morley is able to preplan which pictures from her photo library get posted on social media at specific times in order to update the daily feed for loyal followers.

“Often times, if I have a day off, we’ll take a whole bunch of pictures and then I’ll have a library of photos that I can pick from that are all fairly recent,” Morley said.

The first posted picture was released to the public Oct. 26, 2016, featuring a selfie of Morley cuddling with Lu-Seal that received 167 likes. Since then, Morley has posted 552 pictures and over a year later, Lu-Seal’s pictures are each liked by as many as 2,000 Instagram users.

After the journey she has powered through, Lu-Seal appears to be enjoying her new life immensely, considering the pictures from her social media site featuring Lu-Seal’s goofy smiles, tongue hanging out. When taken home in October 2016, Morley quickly had to meet with a veterinarian for an immediate checkup and diet advice.

Morley put Lu-Seal on a diet of 250 calories per day and took her outside twice daily, starting out with short walks around the block.

“I never had a tiny dog before,” Morley said. “I had to figure out exactly what to do and how to read her behavior. We make a very complicated schedule every month to make sure she gets walked and just generally well taken care of because my wacky schedule.”

Morley’s wacky schedule as a physician complicates balancing her personal life with work and Lu-Seal’s growing fame. She takes Lu-Seal for a walk herself at least once a day and relies on her roommate to take care of dinner and walks to the park. Dog walking services and doggy day care companies also provide immense help to Morley.

Though little in size, Lu-Seal also enjoys visiting her bigger canine friends, Rudy and Winston, for “playdates.” Their owner, Mary Gallo, is quite familiar with Lu-Seal. As Morley’s friend and coworker, they work together as a team to take care of all three dogs.

“Because we’re Emergency Medicine residents, we have such irregular hours that kind of allow us some flexibility,” Gallo said. “Most days we work such odd hours, so the dogs aren’t actually home alone that much. Between the three of us we can make it work — we just gave [Morley] a key and told her to come as she pleases.”

With the support of her large fan base and the care from her mom, Lu-Seal is now a healthy 8 pounds and continues to maintain a healthy lifestyle.

“I wanted to find a way to help other overweight dogs,” Morley said. “People have started to tag me now, so everytime a fat dog comes up on Instagram, I get thousands of messages about it from other people who are like, ‘Oh, Lu-Seal you need to see this dog. This dog is just like you.’”