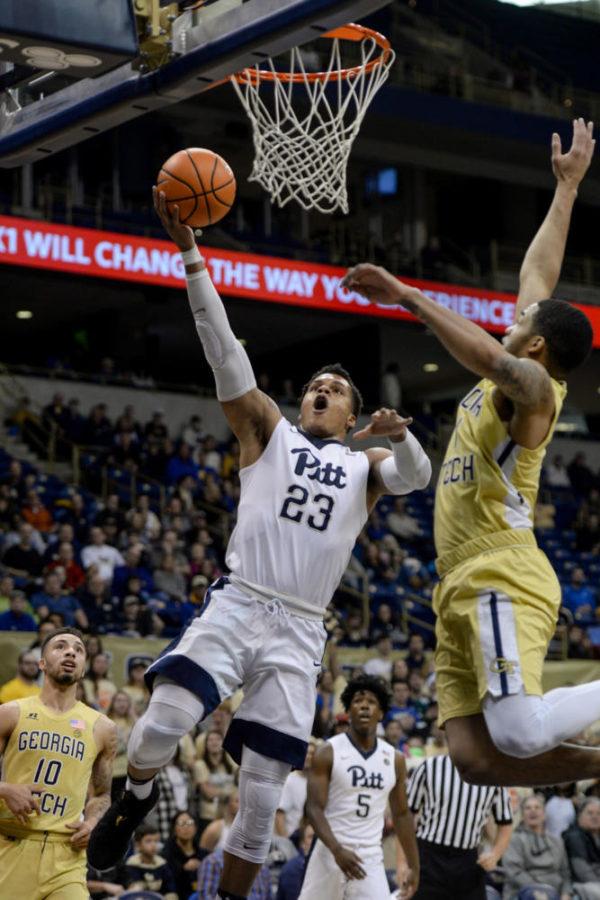 Coming off of an embarrassing defeat to the No. 7 Duke Blue Devils, the Pitt men’s basketball team was poised for its first ACC win of the season against less daunting competition. But, a stout Georgia Tech defense was enough to stymie Pitt’s offense and earn a 69-54 victory, leaving Pitt still win-less in the conference.

Redshirt junior forward Abdoulaye Gueye was a force in the first half scoring 10 points on a perfect 5-for-5 shooting and grabbing five rebounds in the first half. The Panthers had no answer for Gueye or Georgia Tech first-year guard Jose Alvarado who contributed 10 points of his own, including two three-pointers.

Pitt first-year forward Shamiel Stevenson was one of the few bright spots for the Panthers in the first half, posting nine points and three rebounds on 3-6 shooting. Stevenson scored the Panthers’ first basket of the game on a contested left-handed layup nearly seven minutes into the game.

In the absence of senior forward Ryan Luther, Stevenson has stepped up his production and emerged as an efficient offensive option. In his last five games, Stevenson has averaged 9.6 points per game and 5.6 rebounds per game while shooting 53.1 percent from the field.

The Panthers fought back to start the second half, keeping pace with the Yellow Jacket’s offense. Graduate transfer guard Monty Boykins sparked Pitt’s offense with two quick threes off the bench. Boykins’ second three came with 13:40 left in the game and it would be the Panthers’ last made field goal over the next 11 minutes.

Georgia Tech led 49-39 with about 10 minutes left in the game. The Yellow Jackets then proceeded to go on a 15-4 run in which the Panthers’ only four points came from the free throw line. The Panthers’ drought was finally broken with 2:30 left in the game when redshirt senior guard Jonathan Milligan made a layup to make the score 64-45.

The Panthers failed to get back into the game as they lost their fifth straight ACC game, 69-54 to the Yellow Jackets.

Pitt’s next game is Tuesday, Jan. 16 against Syracuse at the Carrier Dome. Tipoff is at 9 p.m.