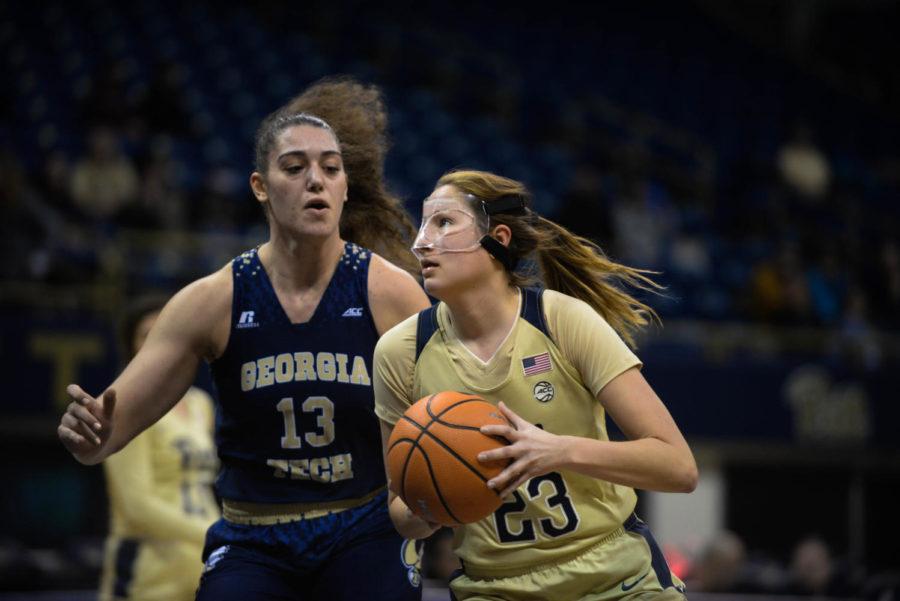 Pitt sophomore guard Alayna Gribble scored her last point of the day at the free throw line to give the Pitt women’s basketball team a 68-62 lead with one second left in Sunday’s game against Georgia Tech. Gribble scored a career-high 29 points in Pitt’s 68-62 victory as the Panthers claimed their first ACC win of the year.

The Panthers (9-9 overall, 1-4 ACC) were in trouble coming into sunday’s game against the Georgia Tech Yellow Jackets (12-7 overall, 1-5 ACC). Riding a four game losing streak Pitt needed a win if it wanted to turn the season around.

Junior guard/forward Yacine Diop, who has been the Panthers’ leading scorer this season, was relieved to get the first conference win of the season.

“It’s definitely a weight off of our back because we’ve been losing so far in the ACC,” Diop said. “Winning this game was very important for our confidence and if we could make a run that would be great.”

Sophomore guard Jasmine Whitney hit a layup followed by a three from first year guard Kyla Nelson to bring the Panthers within two points of the Yellow Jackets at 16-14. Two Georgia Tech free throws brought the score to 18-14 at the end of the first quarter.

After the timid start, the Panthers took off, starting the second quarter with an 18-0 run. Gribble, in her third game back from injury, started the run with two three-pointers on back to back possessions to give Pitt a 20-18 lead with 8:35 left in the half.

A suffocating Pitt defense was also key in spurring the team’s second half run. Pitt recorded six blocks in the first half with four coming in the second quarter alone. Junior center Kalista Walters recorded three of the Panthers four blocks in the second and finished with four on the game, increasing her team high of 34 blocks on the season.

Pitt’s lead inflated to 32-18 before Georgia Tech finally hit their first shot of the quarter with 1:40 remaining in the half. By the end of the half, Pitt held a 34-24 lead.

Gribble’s first 18 points came off of three-pointers alone before she hit her first two-point shot with 3:24 left in the third quarter to give Pitt a 44-32 lead. She finished the game with seven three-pointers, tying her own single-game school record. Gribble said confidence was key in her performance.

“I think I was just more confident and just shot it,” Gribble said. “My teammates just found me open and I had a good game.”

The Panthers’ offense as a whole relied on the three, hitting 10 for the game. The disparity between Pitt and Georgia Tech’s three-point shooting was a huge difference in the game. Pitt was able to get 30 of their 68 total points from beyond the arc while Georgia Tech hit only two threes during the game, going 2-12 from deep.

The Yellow Jackets made an incredible run in the fourth quarter, cutting the Panthers’ 17-point lead down to just four with one minute remaining in the game. Pitt head coach Suzie McConnell-Serio attributed Georgia Tech’s comeback to their press defense in the fourth.

“From the beginning of the year we’ve worked against all types of presses [in practice],” McConnell-Serio said. “There is no pressure in practice, so your players don’t feel that pressure. The defense [in practice] isn’t playing with the sense of urgency that Georgia Tech was playing with.”

Georgia Tech outscored Pitt 28-14 in the fourth and almost completed the comeback. In the end, Pitt’s lead was too much to overcome as they left with the 68-62 victory.

The Pitt women’s basketball team next plays the Louisville Cardinals on Jan. 18. Tipoff is at 7 p.m.