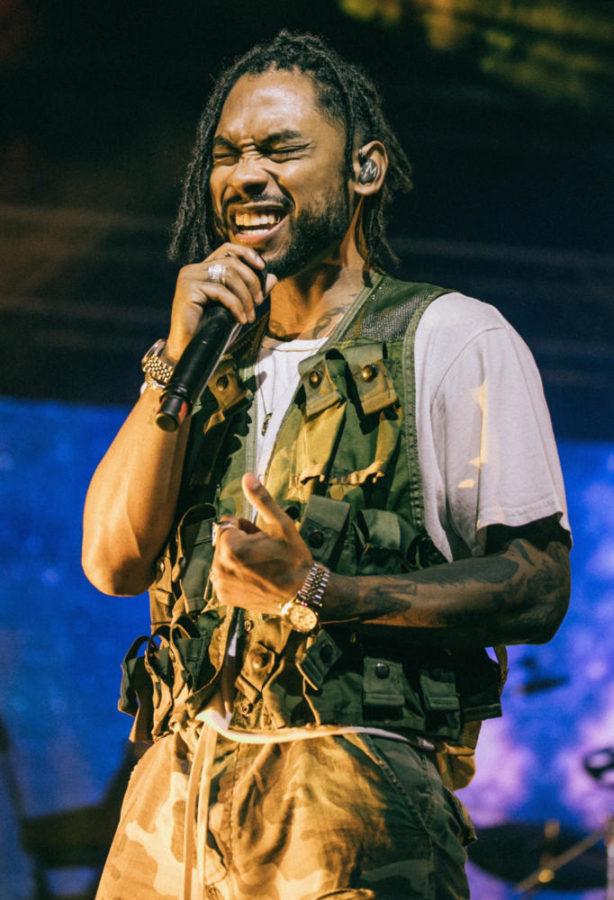 By Taylor Robinson | For The Pitt News

Miguel’s most recent album is a practice in reflection — asking listeners to re-examine their integrity and take a second look at their treatment of each other.

Miguel’s fourth album — “War & Leisure” — attempts to conceptualize the struggle between staying aware of what’s happening in the world and finding ways to de-stress in this overwhelming society.

“War & Leisure” is an experiment for Miguel, as he attempts to merge different musical ideas by playing with style and pacing in new ways. Relative to his past albums, “Kaleidoscope Dream” and “Wildheart,” which aligned more rigidly to the conventions of the R&B genre, this production is geared more toward the pop and funk genres.

The format of the album is more dynamic than Miguel’s past creations, beginning with an eerie love song before moving to upbeat pop anthems and finishing with slower, more politically overt songs. The songs swing back and forth between the often conflicting themes of relaxation and awareness in times of struggle or grief — otherwise known as war and leisure.

Songs that appear earlier in the tracklist contain vague allusions to political issues — including a brief mention of Korean missiles in “Banana Clip” — while the album ultimately gives way to more palatable themes of seduction in songs like “Told You So” and effusive confidence in “Sky Walker.”

Beneath the haunting political overtones in “War & Leisure,” there lies a layer of personal struggle that Miguel explores on varied levels of emotional conflict — from soaring elation on “Pineapple Skies” to self-condemnation in “City of Angels.”

In the latter, Miguel expresses his regret for his infidelity to a past love set against the backdrop of a crumbling, post-apocalyptic city — a metaphor for irreconcilable damage.

“When the City of Angels fell / I was busy letting you down, woman,” Miguel sings.

The real triumph of “War & Leisure” lies in Miguel’s willingness to step outside the bounds of R&B and into the realm of psychedelic pop as he veers toward a sound more similar to Prince’s seductive and playfully synthetic funk in “Told You So.”

When “Wolf” appears fives songs into the track list, the album turns to the dramatic and harsh. With a genre-bending hard rock style not found anywhere else on the album, this song features unwavering vocals and lyrics that express passionate rage and raw emotions. Miguel seems to borrow from The Weeknd’s brooding and seductive tone, making “Wolf” sound similar to “The Hills” and “Earned It.”

Among Miguel’s ventures into themes of political consciousness and genre experimentation — some of which land, while others fall flat — is the upbeat and joyful track “Pineapple Skies.” Record producer Salaam Remi, who has worked with artists like Alicia Keys and Amy Winehouse, provided the inventive beats that cast the track as an original while also feeling true to form for Miguel, who has favored themes of resilience and optimism since his 2010 breakout single, “Sure Thing.”

The ninth track, “Caramelo Duro,” is almost entirely in Spanish, demonstrating Miguel’s ties to his Mexican-American background. In an interview with MTV News, Miguel said this track was his way of reconnecting with his culture. Its title translates to “Hard Candy,” a sexual innuendo featured in Miguel’s earlier albums.

It isn’t until the album’s final song — “Now” — that Miguel provides a laundry list of cities and movements where environmental devastation and social unrest have altered lives and dominated the headlines in recent months.

“In Puerto Rico / Way down in Houston / For Flint, Michigan / For Standing Rock, oh! / Way down in New Orleans / For all of the dreamers / The black lives that we’ve lost right now,” Miguel sings.

Though the political themes don’t come through as strongly as the interpersonal themes do, the album recovers with its thoughtfully crafted track list and hits the mark in weaving new depth into the recognizably raunchy sound carried over from Miguel’s musical past.

“Celebrate every day like a birthday / Good things come to those that wait up (splish) / But don’t wait to jump in too long / Don’t sleep, you gotta stay up (splish).”