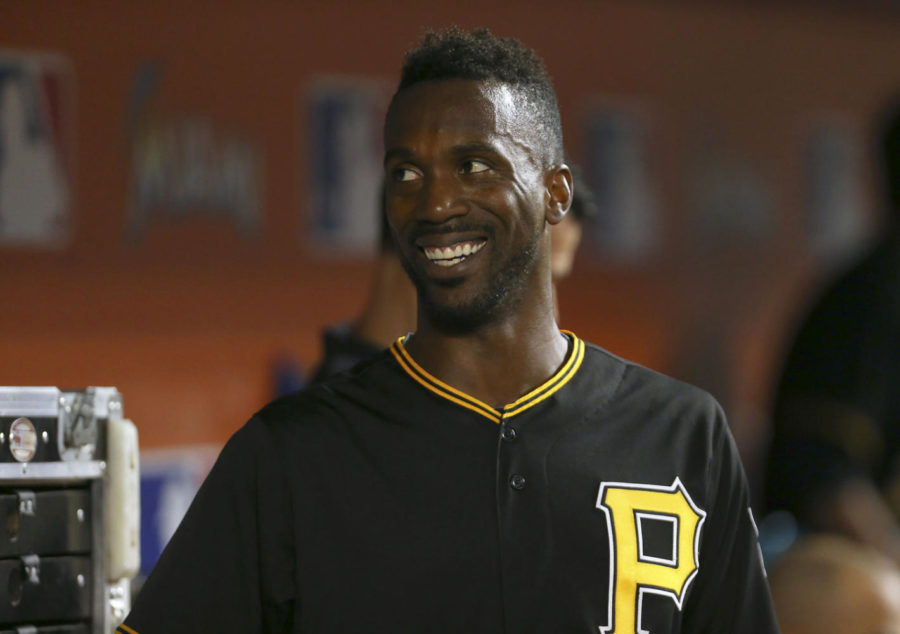 The Pittsburgh Pirates' Andrew McCutchen shown on Aug. 26, 2015, at Marlins Park in Miami. The center fielder was traded to the Giants on Monday. (David Santiago/El Nuevo Herald/TNS)

The nonstop news cycle of the modern world keeps churning out more headlines than anyone can keep up with. That’s why The Pitt News sports desk is back for a second week in a row with five takes on five stories from this past week of sports news.

One Down, One to Go

Now that the Pittsburgh Steelers have officially parted ways with offensive coordinator Todd Haley, it is time for the team to do the same with defensive coordinator Keith Butler. His defensive allowed 45 points in the playoffs to the Jacksonville Jaguars — that’s unacceptable. The team has continued to underperform and not make a Super Bowl appearance, with the poor defense being the main reason. With Le’Veon Bell’s contract negotiations becoming a distraction and Ben Roethlisberger’s career winding down, head coach Mike Tomlin gets one last chance next season to at least win the AFC with a future Hall of Fame quarterback, running back and wide receiver on the roster.

With another loss to the Golden State Warriors Monday, the Cleveland Cavaliers proved they have no shot if the two square off for the fourth straight year in the NBA Finals. Not only have the Cavs lost six of their last seven matchups against the Warriors, but this year’s squad is without Kyrie Irving — the all-star guard who averaged 29.4 points per game in last year’s finals. Offense aside, the real reason the Cavaliers struggle against the Warriors is because they can’t match up defensively. Beyond Lebron James, the Cavaliers have not been able to contain Golden State’s four all-star players. New additions to the Cavaliers in the form of Isaiah Thomas, Jae Crowder and Dwyane Wade, among others, were supposed to provide the depth to defend against Golden State this season. But after two losses this year, it looks as though Cleveland misses the elite offensive ability of Kyrie Irving, and the team still can’t stop the Warriors. If these two see each other in the finals again, it may be the least competitive matchup yet.

End of an Era

Former National League MVP and Pirates center fielder Andrew McCutchen has been traded away to the San Francisco Giants. Who did the Pirates get in return for one of the most beloved players, not only in the franchise, but in the MLB? Relief pitcher Kyle Crick and minor league outfielder Bryan Reynolds. McCutchen hasn’t been great these last two seasons, but he is still a franchise player, and trading him away is gut-wrenching to a fan base that was close to being a consistent contender a few years ago. McCutchen wasn’t the only departure this week: only two days before the McCutchen trade, star pitcher Gerrit Cole was traded to the Houston Astros for another bunch of no-name players.

The organization still says they want to give the city a championship team, but when? They had a window, and instead of spending, they kept their money and threw any chance of being a good team out the window. All this organization wants to do is make money and spend as little as possible. Bob Nutting is more interested in making money at his Seven Springs Mountain Resort than he is in providing this City and its die-hard sports fans a championship or, at minimum, a winning team.

The (Almost) Rumble in the Tunnel

One of the most interesting stories of the week comes from Monday’s Houston Rockets versus LA Clippers game. The Clippers won, 113-102, but the story does not come from anything that happened on the court. Clippers point guard Austin Rivers, on the sidelines due to injury, dressed in a suit, talked trash to the Rockets’ Trevor Ariza in the waning minutes of the game. Ariza chirped back, Blake Griffin rushed to Rivers’ defense and both Ariza and Griffin were ejected for the incident. After the game, ESPN’s Adrian Wojnarowski reported that Rockets players Ariza, Chris Paul, James Harden and Gerald Green pushed into the Clippers’ locker room post-game via a back tunnel connecting the home and visiting locker rooms. Later, details emerged that Rockets center Clint Capela served as a decoy for his teammates’ “attack.” Capela reportedly knocked on the front door of the Clippers’ locker room entrance while his teammates sought to sneak in from the back.

No one was hurt in the near-altercation, but the incident was intriguing nonetheless. For starters, Paul seemingly used his knowledge of Staples Center to lead his new team through a tunnel to confront his former coach’s son, among others. Then there’s the imagery of Capela being used as a Trojan horse for the whole operation. Did Capela volunteer for that position? Was he chosen? Does his stance of neutrality and nonviolence have anything to do with his being a native of Switzerland? No one can say for sure, but the whole thing is fun to think about.

With the Pittsburgh Pirates commencing an all-out fire sale, the next player to go will likely be infielder Josh Harrison, who requested a trade Tuesday. The perfect marriage for Harrison is awaiting him in Flushing, New York. The New York Mets have been rumored to be searching for an infielder this off-season via trade. Harrison plays multiple positions, provides a solid bat and has great speed — which New York needs desperately. The Mets finished 27th in total stolen bases last season, and their baserunning in general has been abysmal. New York has been craving a speed threat on the bases for years and Harrison would immediately fill that gap. It seems as though the only thing that has been holding the Mets back from making an impact move has been their worry of delving into an already thin farm system. However, based on the Pirates’ deal of Andrew McCutchen, the Mets may be able to make a deal without breaking the bank.