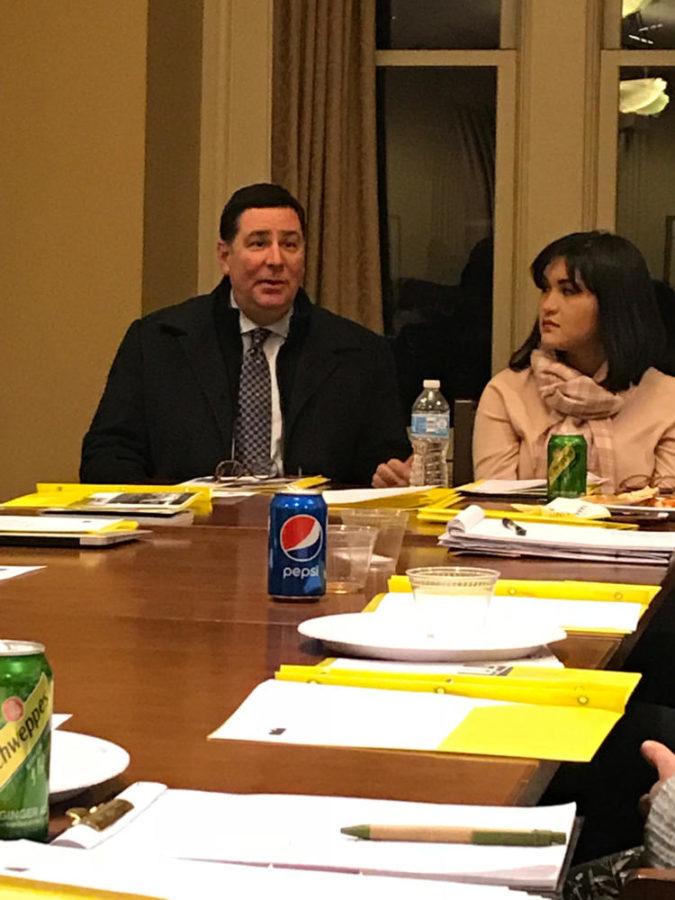 Mayor Bill Peduto prioritizes building up Pittsburgh communities, and thinks Amazon might soon be able to help with this growth at a local level, he said Thursday night.

“What will make Pittsburgh competitive is talent produced locally and incredible affordability,” he said. “With those two things combined we’re at a strategic advantage. It’s how we steer and direct it.”

When Pittsburgh student leaders asked the mayor about Pittsburgh making it onto Amazon’s recent list of potential cities to establish its second headquarters, they sparked one of Peduto’s major points of discussion.

Peduto said he would ensure that any new investments would bring in revenue to support and benefit low-income neighborhoods, and he was hopeful about what prospects this particular opportunity could bring for the City. As he has throughout the proposal process, he said that this will function like any development.

“There’s always a public process and a private process,” he said. “What makes this different is the number of zeros.”

Peduto engaged in a roundtable discussion with the students after giving background of his political career. He then explained some of the program goals for the City’s 2030 plan, including an urban wealth fund, universal pre-K education, purer water, decreasing homelessness and greener infrastructure. He also addressed the problems that could accompany these plans for expansion.

“We won’t have enough workers in the coming years for development projects, hospitals and infrastructure,” he said. “We need to provide people in low income neighborhoods with jobs.”

Pitt Student Government Board President Max Kneis guided the questions about the City’s prospects with Amazon toward issues of gentrification and social and economic inequities. He then followed up with questions about Peduto’s plan for more affordable student housing, and how he will improve relationships between tenants and landlords, and students and local community members.

Peduto said the City has been on the defense about its zoning laws for some time now, but is making significant strides for veterans and low-income communities under the City’s affordable housing fund.

“It needs to come from the community level up. How can it provide a safe footprint for students while also protecting families?” Peduto said.

He also suggested contacting Oakland Planning and Development Corporation as a good first step, and Kneis agreed with this collaborative approach to make improvements.

“He recognized it is a problem, but it will continue to be a problem,” Kneis said. “It’s going to take everyone to work together, both the students and the community.”

Maria Taylor, a senior international relations and women’s and gender studies major at Chatham University, also asked Peduto about his thoughts regarding reintegration of the City’s prison population. Peduto said Pittsburgh is partnering with the Pittsburgh Trade Institute in an effort to provide formerly incarcerated individuals with job training and skill sets so they can find employment upon release.

“The City needs to lead by example, and then work on a workforce development program,” he said. “If you want to take the gun out of their hands put a paycheck in it.”

Taylor, who is heavily involved with foster youth and helping students avoid the school-to-prison pipeline, agreed with Peduto, but expected more concrete plans.

“I thought he talked around the issue,” she said. “He talked about what his administration is doing, but not the problem as a whole.”

Despite some leaving with unanswered questions, Wicklund said the council accomplished its goals for the evening in discussing housing, city investments and urban planning in Pittsburgh.

“I expected student unity and to address students’ pressing questions,” she said. “And I think we got it done.”