The Naughties focus on the fans 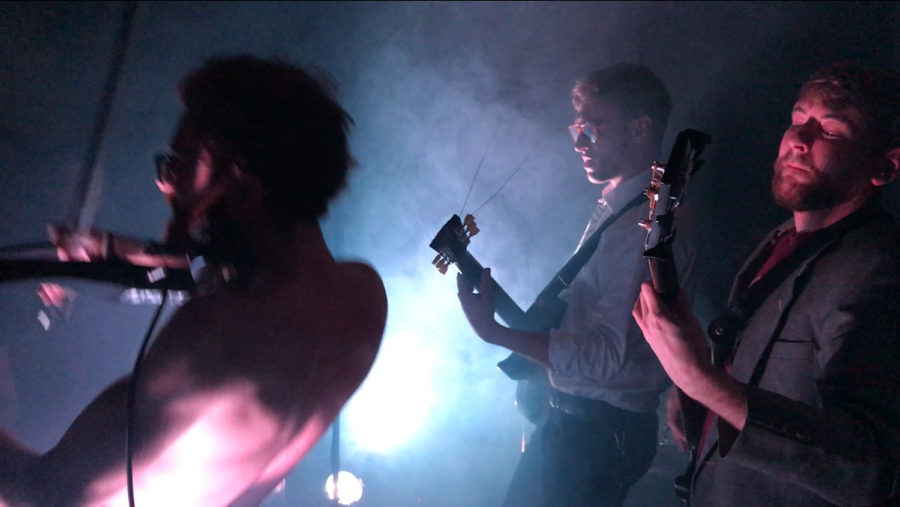 The audience at a typical Naughties show can expect anything from bass player Jad Hilal’s usual joke segment to a patriotic onstage reading of the Constitution — backed by red, white and blue stage lights.

Lead vocalist and guitar player Jesse Wehner, a Pitt senior and economics major, said these kind of stunts are what keep their fans coming back each time.

“The band is a bunch of characters,” he said. “Anyone who knows us well will tell you that.”

Voted best local band in The Pitt News’ “Best Of” poll, The Naughties are comprised of a group of three Pitt students — Wehner, recent graduates Roger Toussaint and Hilal — and local musician Eric Stein. They have since risen to become a favorite in the Oakland and greater Pittsburgh area, partially as a result of their crowd-centric onstage antics.

“I think we’ve catered a lot of what we do to Pitt students,” Toussaint said. “From playing in Oakland as much as we can to putting on a show the average Pitt student will enjoy.”

The Naughties formed two years ago, when Wehner assembled some of his friends and signed them up for Pitt’s Battle of the Bands — a performance that would become their first time playing together.

Wehner recruited Hilal, who had been his roommate from study abroad in London to play electric violin, and Toussaint, his freshman year suitemate, to play drums. They found Stein, their fourth member and bass player, on Craigslist.

When they unexpectedly won Battle of the Bands, The Naughties earned a spot opening for Walk the Moon in their first official show together. The group of musicians decided to keep playing together, and now play in bars twice a month.

“Funny thing is, none of us really knew we were good at instruments until I was like, ‘hey, come over to my house’ one day,” Wehner said.

The Naughties play up to twice a month in bars throughout Oakland, South Side and the Strip district, sometimes bringing out crowds of close to 100 people who come to experience a different show each time — breaking up their setlist with jokes and skits.

Casey Butrus, a sophomore pharmacy major, has been friends with Toussaint and Wehner since they were first practicing music in their freshman dorm room.

“I like how they haven’t changed over the years,” she said. “They’re not trying to sell themselves to people, they’re just there to make sure everyone’s having fun.”

Butrus recalled one particularly raucous show at Hidden Pub, which began with some light joke-telling and ended with an unforgettable crowd dive.

“They’re having just as much fun as the crowd is when they’re up there on the stage,” she said.

The band plays nearly every genre — rock, bluegrass, metal, funk and even disco occasionally, Wehner said. Though they play mostly covers, Wehner said they never play a song exactly how the original sounds.

“We put our own flair on songs people already know, which I think is a great way to keep people interested in your music,” Toussaint said.

There isn’t a particular strategy to putting together The Naughties’ setlist, Wehner said, though compiling the band members’ ideas can take some time.

“An idea will strike,” he said. “Usually Stein will call me, he says, ‘I just got out of the shower I have this great idea.’”

Wehner said the group practices for a couple hours every couple of weeks — usually in his basement, though it was a bit different during their on-campus days.

“We had one that took place in Bouquet Gardens,” he said. “The neighbors loved it.”

Wehner said the band operates more like a live band, choosing to channel their energy into their live performances and audience interactions instead of extensively rehearsing and following a strict setlist for their shows. Stein has brought jam band influences into their shows, allowing the group to play longer songs without losing the audience’s attention.

“People are nuts, honestly, the crowd is equally as entertaining as the band,” he said. “People come half for the music, half for the party, so you get a lot of wildness.”

With Toussaint moving to Washington, D.C., at the end of the month to start a job, the band has chosen a new drummer, Ryan Schroeder, to fill the role. The Naughties’ first show with Schroeder will take place on Feb. 2, at Howlers in Bloomfield, where they plan to keep up the lively performances that have kept their popularity on the rise.

“We try and give people more to look forward to than just coming for the music,” Wehner said. “Everything about the show is more about the crowd than the band.”