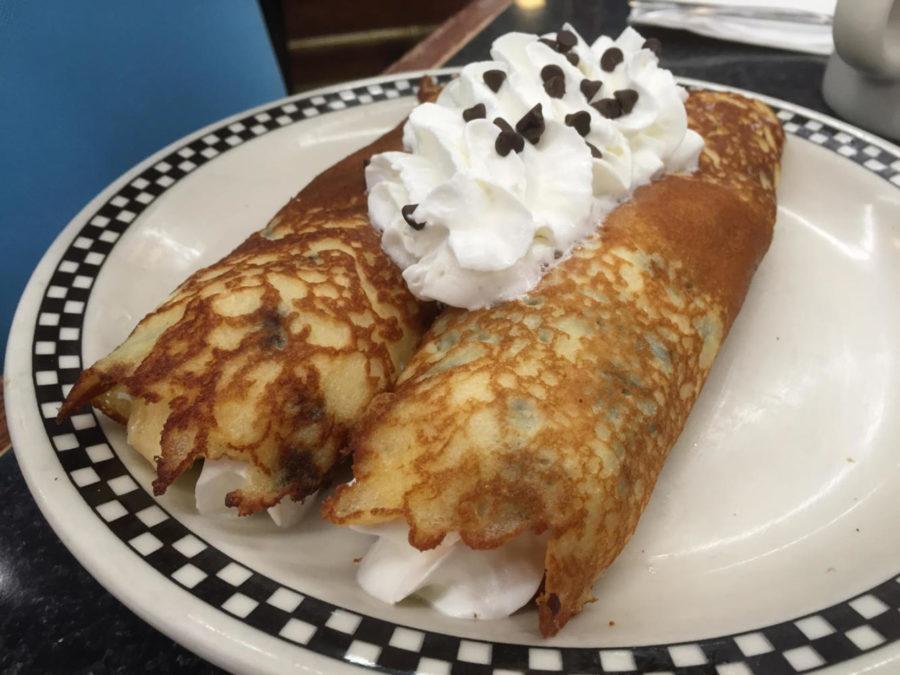 Pamela’s Diner is known for its specialty hotcakes. (Photo by Noah Manalo | For The Pitt News)

By Noah Manalo | For The Pitt News

When I woke up Thursday morning, I felt a little stressed. Weighed down by schoolwork I had yet to complete, and with a long band practice ahead of me that evening, I knew I needed some good food to carry me through the day. I realized the only logical option was to eat at The Pitt News readers’ favorite restaurants throughout the day. My dieting is going very well, and one cheat day won’t kill me.

First up on our list is Pamela’s Diner, winner of Best Breakfast. Pam’s is a prominent chain of diners in the Pittsburgh area. Currently owned by Gail Klingensmith and Pam Cohen, the diner chain has been a staple of the Pittsburgh dining experience since its opening in 1980.

Pamela’s Diner, which now has six locations, is also a national pleaser — it was a campaign stop for President Barack Obama’s 2008 presidential campaign, and The Wall Street Journal included it in a 2013 article of “What to Do in Pittsburgh.”

I arrived a little earlier this morning than my normal morning commute, getting off the 61D bus at 8:55 a.m. I crossed the street, entered the restaurant and was immediately allowed to choose my table from the fairly large seating area.

With a very old-time diner feel and style, the largely green-colored interior seating area is covered wall-to-wall with board games and old album covers as decorations. Examples include games such as “Tension,” “The Magnificent Race” and “Concentration.”

By 9:00 a.m., I had ordered my food, barely skimming the menu because I was planning on getting my regular — I’ve been here before like so many Pitt students. Ten minutes later, my two plates of food were before me.

I ordered the Morning After Breakfast Special, which includes hotcakes — which I added chocolate chips to — two eggs and your choice of bacon, ham or sausage.

Their specialty hotcakes are sublime. Crispy on the outside and soft on the inside, they are easily able to soak up maple syrup. The sausage was crisp and tender, and my scrambled eggs functioned perfectly between bites of sweet pancake and juicy meat.

For the price of about $10 plus tip — and they only accept cash or Panther Funds — you don’t need to bring too much for a substantial meal.

When you think lunch, you usually think sandwich, so Primanti Brothers was my next stop. Founded in 1933 in the Strip District, this sandwich shop chain now has 16 locations on the East Coast.

Joe Primanti — later joined by brothers Dick and Stanley and nephew John DiPriter — started the restaurant in the 1930s during the Great Depression. It became a tradition to head to Primanti’s after sporting events and once the bars closed, as it was one of the few restaurants open past 2 a.m.

Now owned by Jim Patrinos, it is still thriving in states including Pennsylvania, Ohio, Florida, West Virginia, Maryland and Indiana. It was even given the “American Classic” moniker in 2007 by the James Beard Foundation.

The chain is best known for its sandwiches, each containing vinegar-based coleslaw, thin-sliced tomatoes, french fries and Mancini’s Italian bread. My personal recommendations are the Pittsburgher with Cheese, Colossal Fish and Cheese, Kielbasa and Cheese and Deluxe Double Egg and Cheese.

In Oakland, the mostly dark-brown interior seating area has lots of available space. The restaurant holds on its walls pictures, paintings and memorabilia from Pittsburgh. There is also a steady noise of rock music, replaced by sports announcers when the Steelers, Penguins or Pirates are playing.

I had their Pittsburgher with Cheese this particular day, the No. 2 best seller, which took about 15 minutes to make. If you ever ask what their No. 1 Best Seller is, every server will say the same thing — beer.

The thick Italian break is amazing and neatly holds the meat patty, coleslaw, tomatoes and fries. These filling sandwiches are not for everyone, as I found out when some friends from the Eastern side of the state had it. However, as a Pittsburgh area-native, these sandwiches are part of my childhood and have gotten me through thick and thin.

The staff at the Oakland location is friendly, and they love their loyal customers. Most even know my normal order by heart.

Primanti Bros. in Oakland opens at 10:00 a.m. each day. It closes at midnight from Sunday to Wednesday and 3:00 a.m. from Thursday to Saturday. Be sure to also check out Half-Priced Happy Hour Monday-Friday from 5 p.m. to 7 p.m. and Friday and Saturday from 10 p.m. to 12 a.m. for some excellent deals.

Last up, I visited Szechuan Express. Located on Oakland Avenue between Fifth and Forbes avenues, Szechuan serves great Chinese food on site, to go or for delivery.

Being on a busy schedule is tough, and I always have the option on Thursday to eat at 3 p.m. or at 9 p.m. So, it is tough to pick a good restaurant. However, Szechuan took about five minutes to have my meal prepared, and it comes with a bag and container if you order the right meal.

I selected the Shrimp Fried Rice. It was by far my least expensive meal of the day, costing about $7. The shrimp and rice, which contained peas and carrots, were mixed together fairly evenly, and it tasted delicious. It’s the perfect meal to eat in increments throughout the evening.

The walls of the ordering area are covered with pictures of the food items, and the seating area has a sort of dark-colored, low-light feel that allows people to focus on intimate meals. Whether you are alone, on a date or just with friends, you can focus intently on your tablemates, or lack thereof.

While seating can get a little tight, most people eat quickly, so it does not get too crowded. The staff are very friendly and waste no time serving up delicious, cheap meals.