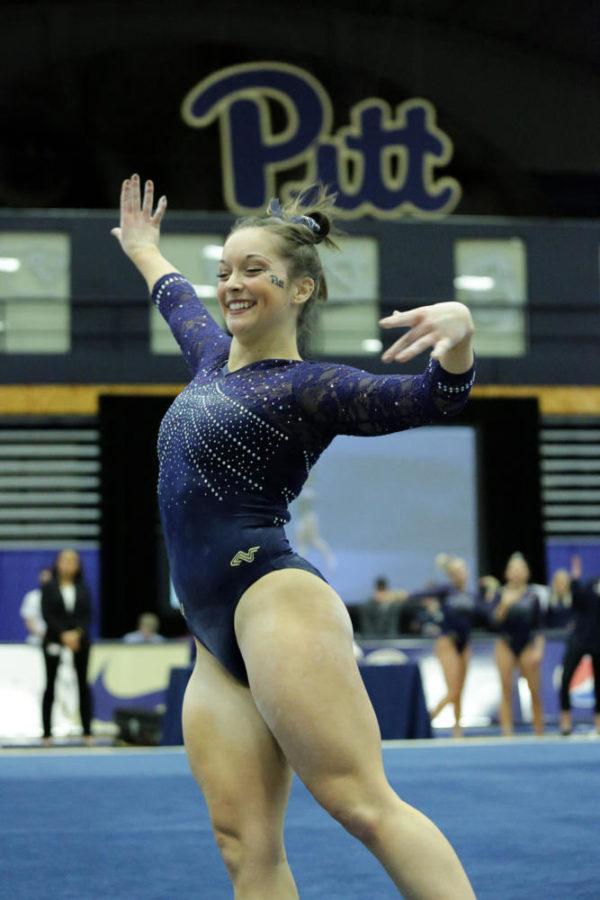 It was a packed weekend for Pitt sports, as teams both claimed historic victories and continued prolonged losing streaks.

Pitt gymnastics made history setting a new program record, and the men’s and women’s swimming and diving teams claimed decisive victories. Still, men’s basketball continued to struggle in the ACC, while wrestling had a tough start to their conference schedule.

With that time, the team consisting of seniors Morgan Harvey, Quadaisha Newkirk, Laila Ismail and Desiree Garland posted the best mark among ACC schools this season. The Men’s 4×400 relay team also took home a victory with a time of 3:12:81.

In addition to these wins, Ismail won the 400m sprint with a time of 55.75 seconds, and sophomore Taylor Middleton posted the top distance in long jump at 5.84m. Sophomore Dante Watson, who was a part of the men’s 4×400 team, also won the 800m.

Additionally, Pitt had 10 other top-three finishes. The Panthers will take to the track next when they travel to Clemson, South Carolina, next weekend for the Bob Pollock Invitational.

The Pitt gymnastics team broke one program record and tied another in its 196.225 to 195.175 victory over New Hampshire Saturday.

The Panthers’ final score was the third-highest score posted in program history, and its best since 2004. The team broke the school record on bars, which had been in place since 1999, posting a score of 49.275. Pitt also tied their record on beam with a 49.125, a score achieved only twice in program history in 2003 and 2004.

As part of Pitt’s record-setting performance on bars, Brechwald posted a season-high and Brett set her career high, both scoring a 9.875.

Pitt heads to East Lansing next Saturday to compete in a quad meet against Michigan State, Eastern Michigan and Rutgers.

Junior LJ Bentley put Pitt in an early hole as he was pinned in sudden defeat at 125 pounds.

Pitt’s struggles continue as this loss pushes them to 2-7 on the year. They travel to Chapel Hill this Friday to take on another ACC foe in UNC.

Moreno was also paired with senior Callie Frey and together they clinched the doubles point in both matchups. The Panthers opened the day by securing the doubles point against Youngstown State after winning the second and third matches.

Junior Natsumi Okamoto gave Pitt a 2-0 lead in singles after winning in straight sets. Junior Gabriela Rezende lost 6-2, 6-3 at No. 1 singles, but the Panthers would win the next four singles matches to secure the overall team victory.

The Panthers then moved on to face Akron, where they quickly took the lead by clinching the doubles point. They won the first four singles matches to take the overall team victory. Rezende topped it off for Pittsburgh by earning her first win at No. 1 singles, 6-4, 1-6, 6-2.

The Panthers are back in action at home on Friday, Feb. 2, when they host Bowling Green at 1 p.m.

Swimming and Diving — Max Sirianni, for The Pitt News

The Pitt men’s and women’s swimming and diving teams both defeated Denison Friday night at Trees Pool. With the weekend full of meets for both teams, they agreed to cut most of the race distances in half, turning it into a special sprint meet.

On the diving side, senior Meme Sharp and first-year Noah Marble both won individual titles in the 3-meter and 1-meter. Sophomore Sam Jenkins had a breakout night, finishing second in both men’s diving events with a personal best on the 1-meter (243.38) and the 3-meter (245.85).

The Panthers are back in action next weekend in their final home meet of the season as they host the Western Pennsylvania Invitational at Trees Pool. The Invitational begins with diving on Friday at 1 p.m. and finishes Saturday with swimming at 11 a.m.

Pitt men’s basketball suffered a major loss to Duke for the second time in 10 days, this time losing 81-54 on the road and falling to 0-7 in the ACC.

The Panthers (8-12 overall, 0-7 ACC) committed 15 turnovers and made just four of their 16 three-point attempts while allowing four Blue Devils (17-2 overall, 5-2 ACC) to score 15 or more points. The result was a game score almost identical to Pitt’s previous match with Duke, in which the Panthers fell 87-52.

Pitt’s next chance to break their losing streak — and come up with their first ACC win — will come Wednesday, Jan. 24 when the Panthers host NC State at the Petersen Events Center.

In front of a raucous crowd of 13,000 people at the Carrier Dome, the Pitt’s women’s basketball team lost to Syracuse and missed another chance to get an ACC win on the road.

Pitt will face No. 5 Notre Dame at the Petersen Events Center this Thursday night at 7 p.m., in the hopes of securing a second conference win.