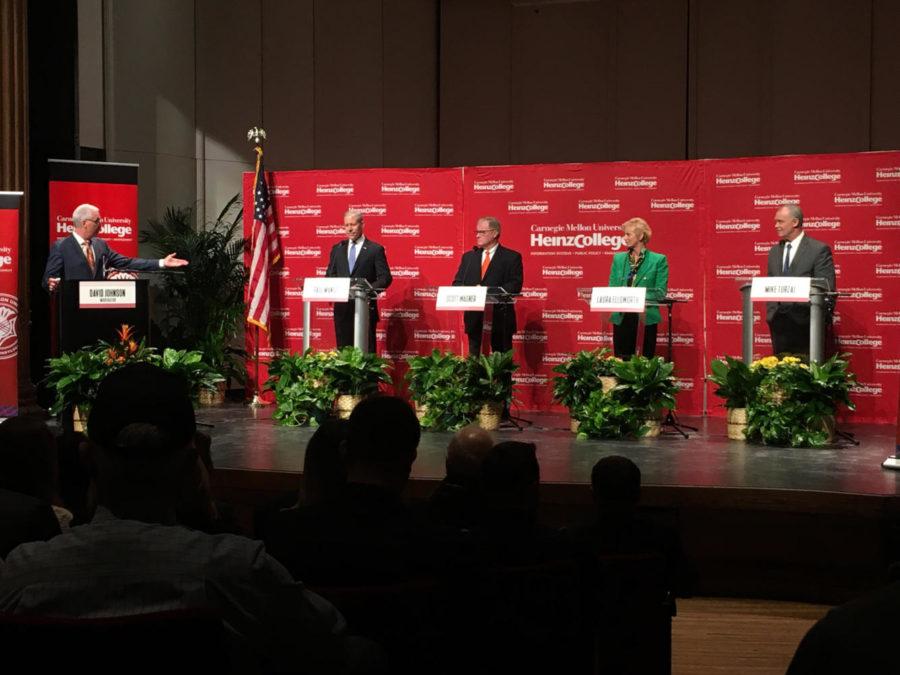 If the four Republicans running for governor of Pennsylvania want my vote, they’ll have to work harder for it than they did Saturday at their first debate.

But despite their prominence within their own party, all of them put on a rather lackluster performance — many times failing to articulate a cohesive vision and frequently embracing policies at odds with the opinions of many Pennsylvanians perturbed by the current administration.

The debaters were quick to offer the type of proposal their party’s voters prefer on tax policy. Wolf raised the state tax by $1.2 billion in 2015, which included a personal income tax hike from 3.07 percent to 3.7 percent. This likely contributed to his unpopularity, with only 36 percent of Pennsylvanians approving of his job as governor according to a 2015 Quinnipiac poll. This issue of over-taxation is one thing Republicans can certainly address with a more conservative plan.

And a more conservative plan was exactly what Saturday’s debaters proposed — sort of.

“We need to bring our jobs back home … that’s how we ensure we don’t raise taxes,” Mango said to enthusiastic applause from the audience.

But the bright spots seemed to remain few and far between. The candidates generally lacked conviction in their arguments, and often seemed to have only a cursory level of understanding about the main issues — rendering them inarticulate and superficial at times.

None of the candidates actually went into specifics regarding their tax plans. Most were content with spewing typical, albeit vague, conservative talking points — slash taxes, end outsourcing. Mango even stooped so low as to call Wolf a “liberal progressive socialist,” as if that amounted to an adequate argument.

The issue of drug laws proved to be a particularly noteworthy example of the disconnect between the candidates and average Pennsylvania voters. According to a 2017 poll from the Philadelphia Inquirer, 59 percent of Pennsylvanians support the full legalization of marijuana. But Scott Wagner remained firmly opposed.

“I do not support legalizing the recreational use of marijuana,” he said.

Other candidates echoed this sentiment on recreational marijuana, but Laura Ellsworth and Mike Turzai softened their stances on medical marijuana — emphasizing the importance of providing needy patients with proper treatment — not quite a liberal viewpoint, but a sharp rejection of traditional conservative policy, no less.

The debaters also failed to fall in line with the traditional American right when they advocated for growth in infrastructure spending — atypical of otherwise fiscally conservative candidates. It was, however, reminiscent of President Donald Trump’s agenda — which also includes astronomical infrastructure spending hikes, and supports bringing “our jobs back home,” as Mango repeatedly and fervently endorsed in his economic policy.

These similarities to Donald Trump strike a dangerous tone for the candidates’ prospective governing styles. Cracking down on non-violent drug offenders and investing huge sums of money into infrastructure are big government policy prescriptions and certainly not consistent with the limited government approach conservatives should favor.

Pennsylvania is in desperate need of economic reform. Democrats and Republicans have traded governorship every eight years since 1950, helping keep Pennsylvania from falling victim to extreme policies. But this cycle broke with Tom Wolf’s Democratic Party win in 2014 over single-term Republican former Governor Tom Corbett. Now that liberal taxation policies have put a stranglehold on market growth and stagnated wages for middle income families, the time is ripe for another party switch in the governor’s seat — possibly the winner of Saturday’s debate.

But given the candidates’ poor performances, it seems the only winner of the debate was our current governor, who could be rubbing his hands with a wolfish grin at the near certain prospect of another easy Republican defeat in 2018.

Neena primarily writes about politics and local issues for The Pitt News. Write to Neena at [email protected].