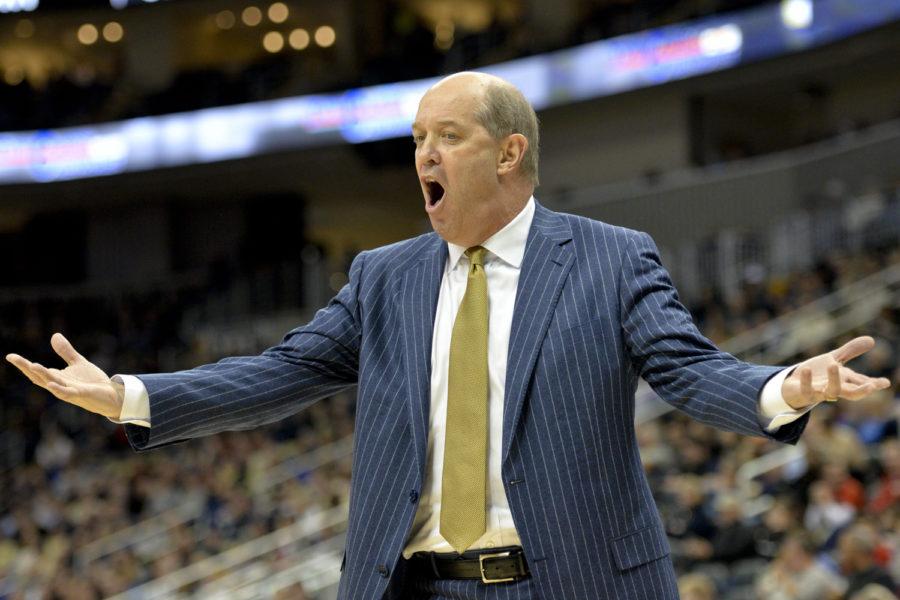 Currently winless in conference play this season and 4-21 overall in the ACC during his time at Pitt, Kevin Stallings has done little to establish Pitt or himself in the ACC.

In two years, Stallings has coached the Panthers to a 55-point loss at home against Louisville and a 35-point loss on national television at Duke. His most famous moment to date is an incident in which he yelled at an opposing fan in the midst of a 26-point defeat.

That is Stallings’ head coaching career at Pitt summed up.

[Read the counterpoint: Stallings should stay]

According to an SBNation poll going on right now, about 65 percent said Pitt will finish the season winless in the ACC, while 29 percent said the Panthers will win one game in conference play. An optimistic group of 6 percent thinks the team will win more than one game in the ACC.

The Panthers have been underdogs in every single conference game this season except for a home game against fellow ACC bottom-dweller Georgia Tech. The Panthers couldn’t even muster a victory in their easiest game of the year, falling to the Yellow Jackets 69-54.

Conference losses like that have become common since Pitt athletic director Scott Barnes hired Stallings to replace longtime head coach Jamie Dixon. The decision was criticized as a step backward because of Stallings’ limited success at Vanderbilt and penchant for stirring up controversy with his players.

Stallings had previously coached the University of Vanderbilt Commodores, going 332-220 overall, but only 138-142 in the SEC during 17 seasons. This included one SEC tournament championship in 2012.

Simply put, Stallings was a below-average head coach in a conference that is considerably weaker than the ACC. The SEC only had five teams in the NCAA tournament last year, compared to nine teams from the ACC.

Nonetheless, Stallings became the head coach of a team with its top six returning players, including two — Michael Young and Jamel Artis — that both signed two-way contracts in the NBA this year, which allow players to play in the G league and spend up to 45 days with an NBA team.

Even with substantial talent on the roster, the 2016-2017 season was a disappointment for the Panthers. The team only won four games in the ACC, with signature wins coming against two ranked teams — Virginia and Florida State.

The Panthers continued to disappoint off the court, with five players deciding to leave the program following the end of the season. The most notable departure was star guard Cameron Johnson.

Johnson dealt with many issues while transferring. After graduating early from Pitt, Johnson had two more seasons of NCAA eligibility. Pitt and Stallings, however, tried to force Johnson to sit out a season if he chose to transfer to a fellow ACC school.

Johnson eventually transferred to the University of North Carolina without losing any eligibility. This year he averages 11.7 points and 5.1 rebounds per game for the No. 10 Tar Heels.

Pitt’s struggles undoubtedly come, on some level, from its young roster — a result of Stallings’ inability to keep veteran players with the team.

Stallings has also failed to replace that outgoing talent with promising young recruits. He was known for getting top recruits at Vanderbilt and was supposed to make an impact with the players he would bring in. So far, Stallings has failed to bring in serious talent. Last year’s recruiting class featured no recruits above a three-star rating, and their inconsistent play on the court proves it.

According to ESPN, Pitt has one player signed for the 2018 recruiting class — Bryce Golden, a four-star power forward from Maryland. Golden is a solid recruit for Pitt, but the program should have more than one recruit signed this late into the recruiting process.

Stallings’ recruiting prowess in the SEC has not translated to the ACC. Recruiting was supposed to separate him from Dixon and get Pitt the talent it needs to progress.

Stallings joined a team with an experienced competitive roster. He was supposed to add to what the program had. There was not supposed to be a rebuild, yet here we are.

It is time for Pitt to call it quits on “the Stallings experiment” and fire him at the end of the season. He has done nothing to build the program up — if anything, he’s set the program back years. The University should look to hire a new coach — preferably someone who is young and will stick around to build the program.