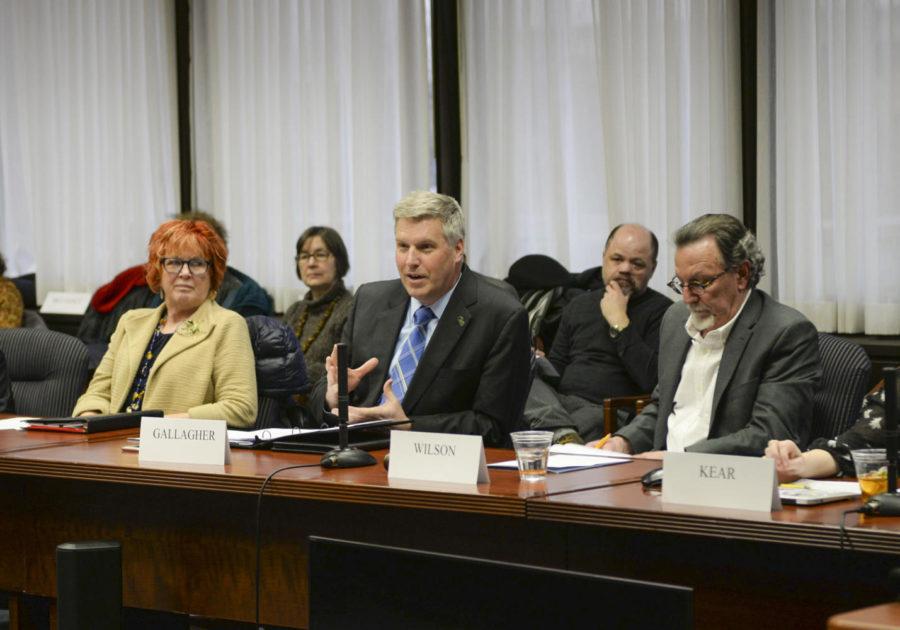 While the Pitt community is buzzing about both the recent suspension of Pitt’s Sigma Chi chapter after a student was hospitalized Jan. 19 and the faculty union organizers’ card-signing campaign kickoff Monday, the University Senate Council did not address either subject during its first meeting of the new semester.

When approached for interviews after the meeting regarding those topics, Provost Patricia Beeson was unavailable to discuss the union and Dean of Students Kenyon Bonner left before answering questions on the Greek life incident. Pitt spokespeople at the meeting offered to answer questions via email, but a spokesperson did not respond to questions about the union or fraternity in time for publication.

During the Senate Council meeting, however, Chancellor Patrick Gallagher did discuss the recent controversy surrounding the Communication Department. After former Pitt professor Carol Stabile published an article in Ms. Magazine claiming there was widespread harassment and discrimination within the department in the early 2000s, Pitt’s Title IX office began an investigation into Stabile’s claims.

“This is completely consistent with how we’ve addressed other things. If people are aware of something that is discriminatory or damaging to others in the Pitt community, there is a place to report that, in this case our IX offices,” Gallagher said.

He had previously addressed the harassment claims in December, saying the University is wholly committed to the safety of its students and employees. And at Wednesday’s meeting,  he further explained how vital it is to receive information about this case.

“If we’re going to make things better and address problems, the most important thing is that those channels are open,” Gallagher said.

Gallagher also thanked the Pitt community for sending “some 6,000 messages to Washington” about the Republican Senate tax bill, which initially proposed a tax on tuition waivers. Such a move would have affected 145,000 graduate students, but after widespread protest, that part of the bill was dropped.

“Many of the most adverse provisions that we were concerned about were not included in the final bill,” Gallagher said.

In more local news, the University Senate did not speak at length about Gov. Wolf’s upcoming state budget proposal, with Gallagher claiming, “It’s really too early to say much about it.”

Zuri Kent-Smith, vice president of Pitt’s Student Government Board, asked what this year’s timeline for the University’s socially responsible investing ad hoc committee — a group of Senate Councilmembers, students and faculty dedicated to researching the environmental and financial implications of divestment in fossil fuels — would be. Gallagher said he wished he knew and that the committee needed to focus on its research first.

“This will probably be a mixture of some presentation-type where the committee is sharing information, but also input-type things where they have hearings where they’re soliciting input,” Gallagher said.

“We’ve begun to get people sending in their lists, and that will be a bigger item month to month as we get closer,” Wilson said.

Wilson also revealed he will be involved with SGB’s recently announced initiative to supply Pitt students with open educational resources, which include textbooks, video lectures and other classroom materials published under open license — meaning these materials will be available for free online and may be modified and shared.

“This is something I have been interested in as an undergrad teacher for a long time,” Wilson said. “I’ve tried to convince people to jump on the bandwagon so that we can do something more collective, and I haven’t been very successful.”

“I’m really excited for all of the support that we’ve received so far, especially from the provost office and President Wilson. And I’m excited to see how we can move this initiative forward,” he said.

Kneis also said that this semester SGB will work to better promote some of the services it offers, including the free legal consultations available to students each week.

Chris Staten, president of the Graduate and Professional Student Government, reported on an initiative GPSG promoted this previous year — travel grants. Staten said the organization has awarded $46,085 in travel grants so far this academic year, 7 percent higher than last year.