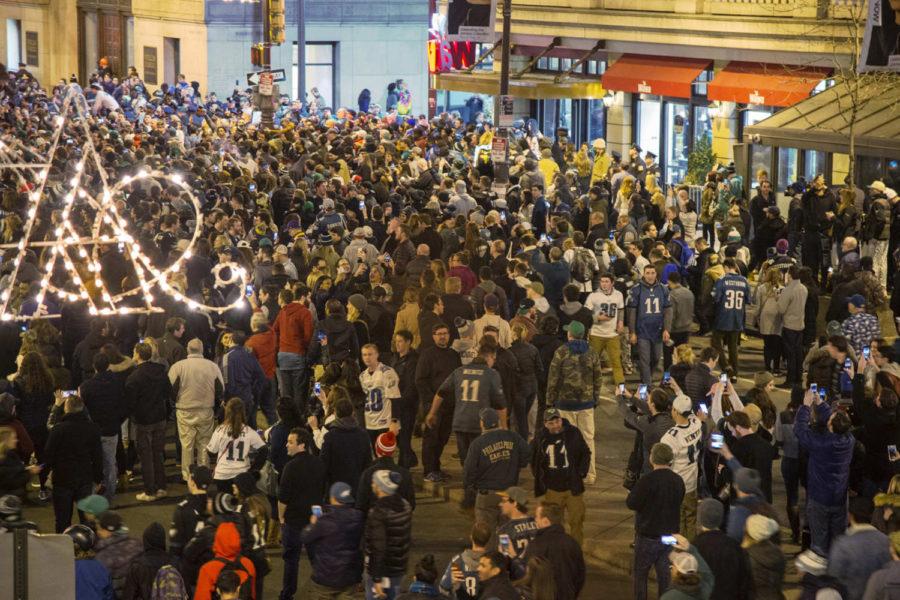 Crowds of Philadelphia Eagles fans celebrate at Broad and Walnut streets after the Eagles won the NFC Championship game over the Minnesota Vikings on Sunday. (Tom Gralish/Philadelphia Inquirer/TNS)

Another week, another glut of sports headlines to keep up with. The Pitt News sports staff is back to keep you up to date on everything happening across the sports landscape.

After the Eagles’ 38-7 victory over the Vikings last week, it didn’t take long for videos of raucous fans to surface on Twitter and Facebook feeds across America. These videos — mostly filmed by onlookers — depicted events such as Philadelphians throwing beers at fans of the opposing team and a man punching a police horse. City employees also had to grease up light poles using tubs of Crisco near Lincoln Financial Field so fans wouldn’t climb up them.

A lot of people are using these videos as an excuse to, as usual, degrade the entire city of Philly. I say down with it! Philadelphia — or Filthadelphia, as some of you may like to call it — isn’t all that bad. There is a lot of art, culture, history, great food and, to top it off, it’s the City of Brotherly Love!

So these Eagles fans could have shown a little more respect to the opposition, but please don’t bring the entire city — or fan base — into it. Plus, fans who felt bad for the damage donated $7,000 to the Mike Zimmer foundation, named after the Vikings’ current head coach.

The Empire Strikes Back

The No. 2 overall high school basketball recruit in the class of 2018 as ranked by ESPN, Zion Williamson, committed to Duke Saturday night. Williamson has been a YouTube sensation since he was a first year in high school, amassing millions of views on his highlight tapes. His team’s matchup with fellow high school phenomenon Lamelo Ball had more than 80,000 viewers on Facebook Live in July. Being from South Carolina, many thought Williamson would choose to attend in-state school Clemson. He shocked the college basketball world, however, by joining a Duke recruiting class that already has R.J. Barrett and Cam Reddish, the first- and third-ranked player in the country.

Williamson, once a fan favorite, has now become a villain in the eyes of many. It’s a shame he had to join the dark side in Duke’s evil empire. The Oakland Zoo should start preparing now to boo Williamson out of the gym if Pitt wants any hope of taking down the Blue Devils next season.

During the game between the Warriors and the Knicks Tuesday night, Kevin Durant was ejected from the game after his second technical foul. The two techs earned Durant his fourth ejection the year, and neither were convincing fouls. Tuesday night was a perfect example of the tumultuous relationship between NBA players and the referees. Players have been complaining all season about the quick whistles of many NBA officials when it comes to technical fouls for contact on a layup or, in Durant’s case Tuesday, talking back to a referee.

Draymond Green, who leads the league in technicals with 11, told reporters earlier this month that the NBA should replace all referees. The NBA is riding a wave of popularity right now with an entertaining style of play and a wealth of superstar players. It’s a shame that a contentious relationship between the players and officials is getting in the way of the spectacle. The players and representatives for the referees are scheduled to have a meeting during All-Star weekend to discuss this. For the fans’ sakes, let’s hope something productive comes out of it.

— Jon Shaiken, For the Pitt News

The Cleveland Cavaliers, losers of 10 of their last 13 games, are a mess both on the court and in the locker room. Poor Kevin Love has shouldered much of the blame for his team’s shortcomings. He’s the Cavs’ second-best player, averaging 18 points and nine rebounds per game, and gets ragged by teammates.

Isaiah Thomas reportedly approached Love about his effort in Saturday’s game against Oklahoma City. Thomas has never played defense in his whole career, and he’s the one ragging Love? In the interest of all parties involved, Love needs to talk to Cavaliers General Manager Koby Altman and demand a trade. With the rumors circulating that Dan Gilbert may be looking to sell the team and the uncertainty of Lebron James’ future, it’s likely best for Cleveland to hit the hard reset button. Love is still a quality player and could net decent assets in return. Free Love like the ‘60s. Free Love.

The Baseball Hall of Fame elected its 2018 class of inductees Wednesday night. The class features the likes of Chipper Jones, Vladimir Guerrero and Jim Thome. For the sixth year in a row, the Hall of Fame will not induct baseball’s all-time home run leader, Barry Bonds.

Bonds received 56.4 percent of the vote Wednesday, falling short of the required 75 percent to get in. Since he became eligible in 2012, five years after his retirement, Bonds has struggled to get enough support on the ballot because of his history of steroid use.

Bonds is this generation’s Pete Rose. Rose, the MLB’s all-time leader in hits, was banned from the Hall of Fame for betting on baseball, and now Bonds is seemingly getting the same treatment. The exclusion of Rose, Bonds and other worthy hall-of-famers from the last 20 years begs the question: What is the point of a hall of fame if it doesn’t include the game’s best players? The Hall can erase Bonds from history if it wants, but it can’t erase those 762 home runs from our memories.