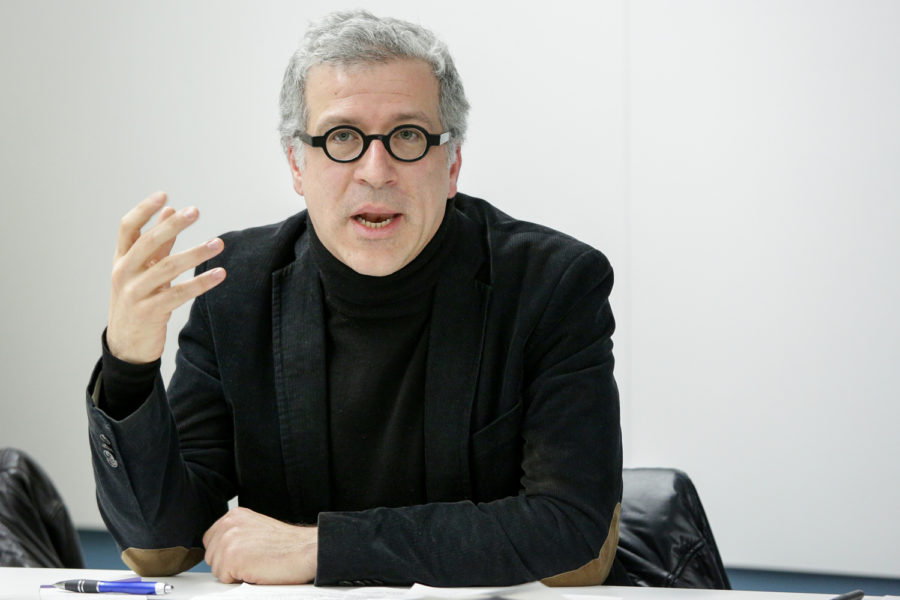 Professor Frederic Merand from the University of Montreal discusses the future of European politics at the European Studies Center’s “Will the EU Fall Apart” Roundtable Thursday afternoon. (Photo by Thomas Yang | Visual Editor)

The European Union may seem stable, but according to Rachel Epstein, professor of international relations and European Politics at the University of Denver, this stability could be temporary.

“Right now, it doesn’t look like there’s a problem because we’re in a period of economic growth,” Epstein said. “But in another cyclical downturn, you could easily have more problems. A number of the Eurozone countries are very heavily indebted still.”

More than 40 students and faculty gathered in Posvar Hall Thursday evening to listen to a roundtable discussion, titled “Will the EU Fall Apart?” The European Union Studies Association, European Horizons and the German American Chambers of Commerce cosponsored the lecture.

Epstein’s discussion focused on how the EU will recover from recent widespread financial problems. She said one of the factors causing the financial issues in the EU is national banks lending to their own governments. She further went on to say many fiscal problems in the EU can be traced back to this “fragile” relationship between governments and their banks, and this connection must be severed to prevent further financial instability.

“This is still a gaping hole in the current financial architecture,” Epstein said. “That’s a very difficult, potentially disruptive and instability-creating kind of transition going forward.”

Newman, an associate professor at Georgetown University, said the conversation on the EU should shift toward a more global perspective. He emphasized the importance of connections with both Latin American and Asian countries, specifically China. The growth of the EU is dependent on looking “from the outside in.”

For Weikun Zheng, a graduate student at Pitt studying policy research and analysis, the roundtable was an opportunity for exposure to new perspectives of the EU.

“I think because I’m from China, I know more … from a Chinese perspective. But from their perspective is another story,” Zheng said. “A new perspective helped me understand the whole thing more.”

Ion Simonides is a graduate student at Pitt studying public and international affairs. As a Greek citizen, he said the roundtable discussion lent him a new, etic perspective on certain countries in the EU.

“This was hugely informative for me in terms of … the European side,” Simonides said. “My research on Europe and the EU has always been from the perspective of Greece and what Greece is going through.”

Simonides said he thinks there are many financial problems with the EU. Especially in regards to Greece, he cited “bad governance” and “entrenched corruption” as the main factors behind economic instability in the country.

“A monetary union between economies of such different scales is very hard. Germany’s economy versus Greece’s economy — they’re completely different sizes. And so for them to use the same money at the same value is inherently really difficult,” Simonides said. “As much as being in the EU has benefited Greece, when we joined we weren’t ready to join. I think people are more aware of that than they admit.”

Simonides, however, is optimistic about the EU. Especially in regards to Greece, he’s hopeful that positive change will be implemented soon.

“Hopefully within my lifetime there will be some real structural, institutional changes that happen,” Simonides said. “It’s going to take time. A long time.”