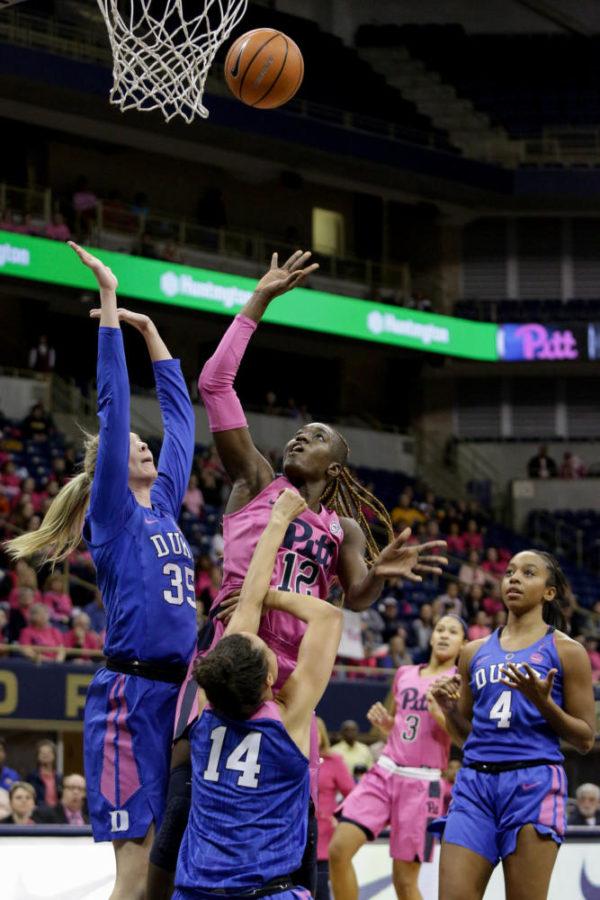 With more than 2,000 fans in a sea of pink in support of a cure for breast cancer, the Pitt women’s basketball team fell 58-46 to No. 18 Duke in the 11th annual Pink the Peterson game.

“It’s fun when you have all those people there. And today it was bigger because it wasn’t just for us, it wasn’t just about us,” sophomore guard Jasmine Whitney said. “It was fun to play. First half was a little slow, but second half we kept them in it. It just gave us energy.”

The Panthers’ (9-13 overall, 1-8 ACC) strong comeback in the second half was not enough to upset the Blue Devils (17-5 overall, 6-3 ACC). This marks the fourth loss in a row for Pitt in the ACC and the team now sits dead last in the conference with only one win.

To start the game, redshirt senior guards Lexie Brown and Rebecca Greenwell both sunk threes, driving the Blue Devils to a 12-2 lead with 5:30 left in the first quarter and leading Pitt head coach Suzie McConnell-Serio to take a timeout. Redshirt sophomore guard Haley Gorecki led Duke in scoring in the first with six points and the Blue Devils led the Panthers 16-7 at the end of the quarter.

The Panthers had a tough time scoring in the first quarter as they shot a collective 3-14 from the field and 1-for-6 from 3-point range. Redshirt junior forward Yacine Diop couldn’t get the offense going, shooting only 1-for-5 in the quarter.

The second quarter started off on a drive to the hoop by Diop. While Diop was able to score six points in the quarter, Pitt continued to struggle on offense. The rest of the team shot 1-11, including sophomore guard Alayna Gribble shooting 0-5, including 0-4 from 3-point range.

“I think the biggest thing today was the first half, that we weren’t really scoring, so that was an issue in the first half,” Diop said. “But if we made our shots and limited the turnovers, it could’ve been a different game.”

The second half saw a change from the Panthers as they cut into the Blue Devils’ lead. Junior guard/forward Kauai Bradley scored eight points in the third quarter, including two 3-pointers, after not scoring any in the first half. Sophomore guard Jasmine Whitney scored eight points as well, shooting 4-for-5.

With this, Pitt was able to cut the lead to 41-34 at the end of the third quarter.

Diop led the Panthers back into the game in the fourth quarter, scoring the first seven points of a 10-0 run. A 3-pointer by first-year guard Kyla Nelson gave Pitt the lead for the first time in the game at 44-43 with 6:43 left in the quarter.

Duke was able to counter Pitt’s run with a 15-2 run of their own to close out the game. Brown played a big role in the fourth quarter for the Blue Devils, scoring 10 points on 4-7 shooting. Pitt couldn’t capitalize on their early fourth quarter lead as they turned the ball over six times and shot 1-8 down the stretch.

Pitt will look to end their losing streak when they travel to South Carolina to take on the Clemson Tigers this Thursday at 7 p.m.