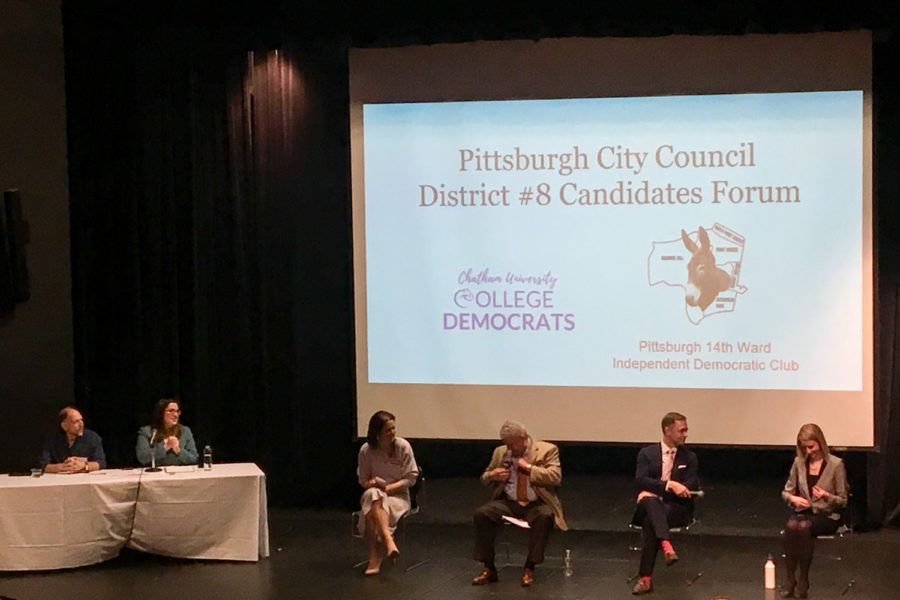 The corporate relations manager of the Pittsburgh Ballet Theatre stood on stage at Chatham University Sunday afternoon and sang: “one of these things is not like the other.”

Rennick Remley wasn’t rehearsing for an audition, but instead preparing to participate in a debate against one Democrat and two left-leaning Independents, all running against him, a Republican, for the District 8 city council seat, which represents parts of Oakland, including Pitt’s campus.

Remley was joined on stage by fellow candidates Sonja Finn, a local award-winning chef and the Democratic nominee, businessperson Martin Healey and District 8 chief of staff Erika Strassburger, the Independent candidates — both of whom ran against Finn in the Democratic primary.  The special election for the seat — vacated by Dan Gilman, now the mayor’s chief of staff — will be held March 6.

After a brief address from Gainey and opening statements from all four candidates, moderators Matthew Weiss and Krysia Kubiak Vila-Rogers of the 14th Independent Democratic Club began the debate.

Strassburger said the city needs to expand its development of affordable housing as well as take measures to protect the housing that already exists.

She also focused on the need for better services from the city for District 8 constituents, including snow removal from public streets.

“I dropped my son off at Linden [Elementary School] last Tuesday and nothing had been done to Linden street, in front of a public school,” Finn said. “We can at least clean the streets in front of our public schools.”

Remley fell in line with his Democratic counterparts on both the issue of constituent services and that of the PWSA, specifically with regards to the city’s ongoing problem with replacing decades-old lead pipes.

“The city is vibrant, has diversity and is full of promise, but I’m running for city council because I don’t feel that that promise has yet been fulfilled,” Remley said. “It was evident this past summer when our parents had to tell their kids they couldn’t drink from the hose.”

Strassburger agreed with Remley, and proposed a plan to fix the PWSA by finding and replacing all of the lead lines in the Pittsburgh water and sewage system.

“We’ve heard a lot about the lead mainlines and lead service lines and how difficult it is bureaucratically to get around that,” Strassburger said. “First thing we need to do is map all of those out. And then we are finding the money and replacing all of those lines.”

Strassburger was also vocal in her support of bringing the new Amazon headquarters to Pittsburgh, citing the estimated $5 billion in investment the move would bring.

Healy took a stance in opposition to Strassburger’s optimistic view of Amazon’s potential arrival. His concern came from the lack of information citizens have been given about Pittsburgh’s bid for the headquarters.

“I think that it would be a wonderful thing, as long as we’re approaching it in the right way,” Healy said. “I think we should know as much as we possibly can without being irresponsible to the bid, we should know what’s in there.”

After the debate concluded, Remley said he thought the debate went well for him as the only Republican in a district that has been represented by a Democrat for 81 years.

“I didn’t really have any expectations going in,” Remley said. “I think it was successful in so much as showing people that I’m not the enemy and that there are still some Republican ideals that can work for the city.”

Remley stood out as the only Republican on the stage. Finn, the Democratic nominee, said that she wished she would’ve done more to separate herself from her left-leaning competitors. She said she needs to learn how to get her ideas out more concisely.

“I don’t think I did enough. It is hard to learn so quickly how to self promote,” Finn said. “I am very thoughtful about things and therefore I try to explain too much in too little time.”

“I think from the standpoint of really understanding how to make Pittsburgh grow, she would be the best candidate for that.” Nathan said. “I think she had a much better grasp of the issues than I think the other people do, and that’s not surprising.”