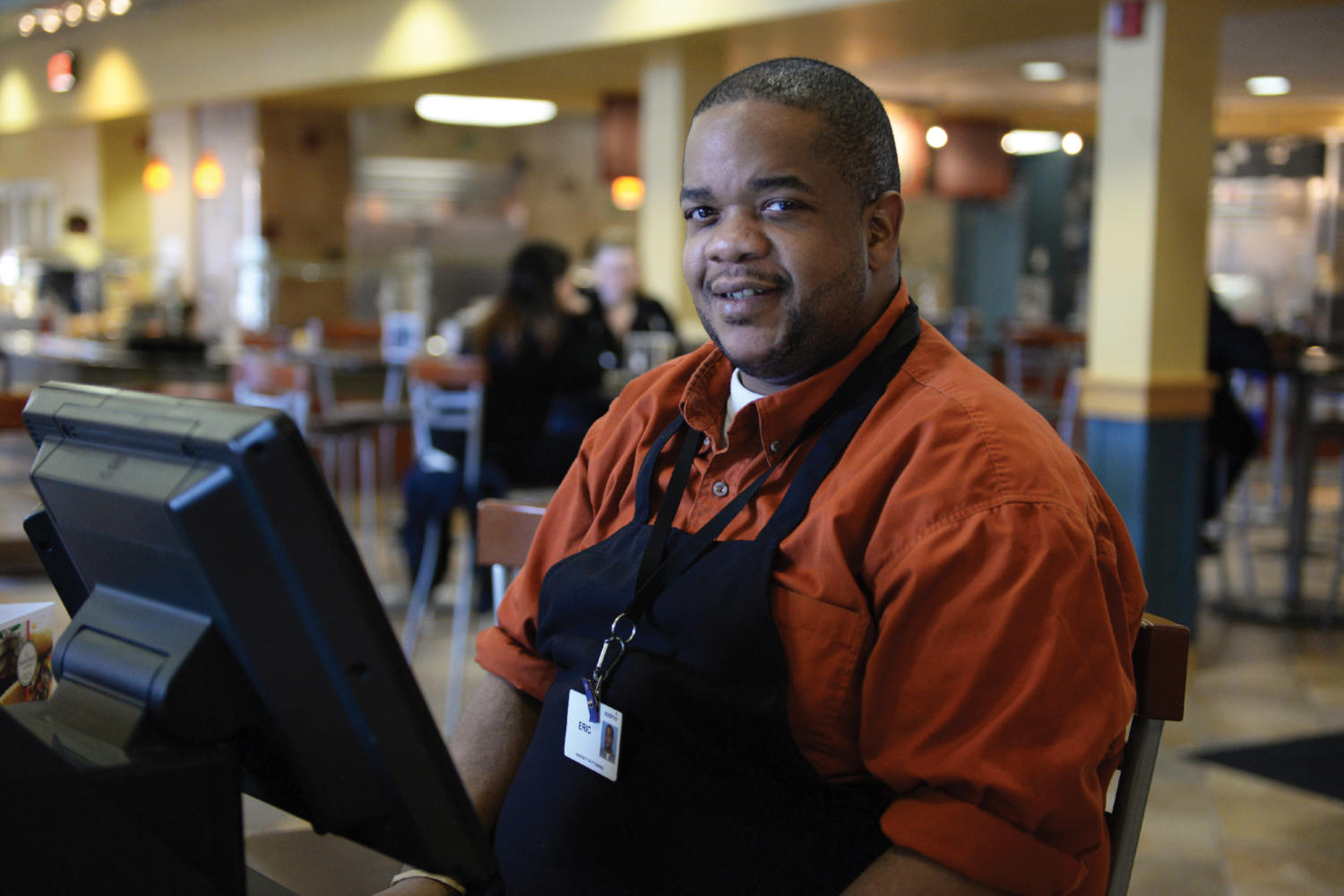 For Eric Daniels, whose philosophy in life is to “always stay positive, because there is always somebody watching,” crying usually seems like a drag.

Daniels, 34, grew up in Beltzhoover, a neighborhood in Pittsburgh’s South Side. He now lives in Mount Washington with his younger brother, whom he’s taken care of since their mother suffered a severe stroke 10 years ago, and works as a cashier and stocker at the Quick Zone in Sutherland Hall.

A self-described “big kid at heart,” Daniels still plays video games and watches cartoons, while devoting his life to pursuing others’ happiness.

“Hearing people say that I’m a nice person and a great person to be around ... sometimes I don’t see it, because all I do is just work and try to help y’all out,” Daniels said. “When people come down, I like to joke around, make them smile, make them laugh. If they feel sad, my job is to try to pick them up.”

Daniels tries to raise his coworkers’ spirits, he said, and they do the same thing for him.

“That’s why I enjoy working here ... [My coworkers] are also some of [my] best friends,” Daniels said.

Although Daniels prioritized taking care of his family over attending college, he might still pursue higher education. He’d study business, he said, or a field that would allow him to interact with kids.

“My initial plan was to always study business. I just wanted to be able to run my own business. It didn’t matter what it was, as long as I was the man running it,” Daniels said.

Daniels has been working at the Quick Zone as a cashier and stocker for almost 10 years.

“I’m proud of the fact that I’m working and have been working for a long period of time,” Daniels said. “It’s fun. [I] wish I would have known this a long time ago.”

Although the job comes with some slower days, Daniels said he doesn’t mind the lapses in work because he finds tasks to do.

“As long as I’m down here, and as long as y’all come to see me every day, I can never get bored,” Daniels said.

His favorite part of the job is meeting students and getting to know them. When students walked by, they all greeted him with “What’s up, E?” “Hello, sir” or “Hey, Eric,” and Daniels addressed them all by name.

The comforting figure wasn’t always eager to talk to people.

“My teachers used to always get on me about ‘If you have a question, then open your mouth,’” Daniels said. “But I would always be in the back of the class and not ask any questions.”

Being shy is one of Daniels’ biggest regrets, but he said he opened up after high school.

“When I got out of high school, I realized if you need something and you want something, that is when you have to open up your mouth,” Daniels said.

Daniels went to South Vocational-Technical High School in South Side, but the school closed in 2003, and the space was used for condominiums.

“I was sad to see it go, because I wanted to see my brother go through it,” Daniels said.

Although Daniels said he made a couple of bad choices during his senior year, his best memories were making the honor roll sophomore year and graduating.

“Graduating high school was my greatest moment ever,” Daniels said.

While The Pitt News interviewed Daniels, one of his coworkers asked him what the story was about. Daniels began to cry, but not because he was sad.

“Look man, I’m already bashful as it is,” he said as he smiled and wiped away tears. “I’m nervous now 'cause you walked over here.”

Daniels is a jolly man ­— even as he walks around Quick Zone, he has a bounce to his step and a beaming smile on his face. His mindfulness of other people is evident in his everyday life.

As he rings up students’ items at his register, he talks to them and waves to others as they walk in.

“I’m very blessed to be where I am right now ... there are some people who I happened to grow up with who are less fortunate to make it to my age,” Daniels said.