Before Charlotte Goldbach knew which college she’d attend or what city she’d live in someday, she knew she wanted to be a senator.She hasn’t reached that level of political success quite yet — but, at age 20, she’s already established herself as a Democratic politician, at least in Chatham Township, New Jersey.At 19, in summer 2015, Goldbach ran a write-in campaign for Chatham’s Township Committee. She walked her dog around her neighborhood all day, she said, asking everyone she met to write her in on the ballot.

“They told me that I wouldn’t be able to run,” Goldbach said. “But I didn’t really like them telling me that.” 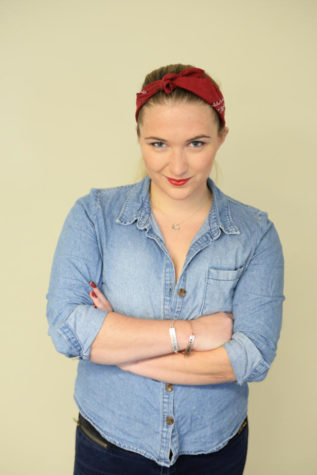 After 72 hours of campaigning, Goldbach lost the election by one vote — she said one friend accidentally wrote her name on the wrong ballot, spelled her name wrong or some combination of the two mistakes.

Though she said she wouldn’t have won the general election even if her write-in campaign did work, Goldbach doesn’t see the loss as a loss, but rather another rung on her ladder to a political career.

From interning for Joe Sestak’s campaign at 18 to running for city council at 19 to helping to start Pitt Students for Hillary at 20, Goldbach is a real-life Leslie Knope — a political junkie with no shortage of creative passion.

“[She’s] everything I hope to be and more,” Goldbach said of the beloved “Parks and Recreation” star.

Her dream, she said, is to become a member of Congress by the age of 40 or 50 — but only after she manages some local campaigns in her home state and runs a presidential campaign or two.

“I want to get people who will make positive change [elected] until I can get elected,” Goldbach said. Right now, she’s pushing hard for Clinton as Pennsylvania’s primaries approach and the presidential race closes in.

When she isn’t tweeting from the Pitt Students for Hillary account, Goldbach works on cultivating her leadership skills in as many Pitt clubs and organizations as possible.

She writes comedy for Pitt Tonight, serves as vice president of College Democrats, hosts a weekly radio show on WPTS, manages social media for Pitt Students for Hillary and helps out as a brother of Pi Sigma Alpha. Continuing her stream of leadership, Goldbach is taking over as the WPTS news director next year.

“Whenever I have the opportunity to do something, I take it,” Goldbach said.

For her, involvement in clubs she’s passionate about isn’t a nuisance — it’s a haven.

When she struggled with depression and anxiety in high school, Goldbach said her strongest coping skills were filling her days with music, meetings and meditation.

A songwriter, singer and pianist, Goldbach spends at least an hour each week practicing original music in the Music Building. She also trains every week for a half marathon, and practices mindfulness meditation twice a week at the Stress Free Zone.

“[Meditating] reminds me to stop for a minute,” Goldbach said.

Goldbach said she’s still navigating depression and anxiety, but her busy schedule keeps her in check.

She keeps most of her music — coffeehouse tones underneath her Regina Spektor-ish voice — private until it’s perfect, as her lyrics often meditate on deeply personal feelings about relationships and depression.

But even when she’s practicing piano at the Music Building, Goldbach’s focus remains on politics. In the middle of playing a song about an ex-boyfriend, she stopped to check a notification on her phone — “Martin O’Malley is endorsing John Fetterman?!”

Goldbach hopes her name will fit alongside Elizabeth Warren’s and Hillary Clinton’s someday, and said she’ll likely focus on women’s issues once in office.

“I can’t get over that there’s still inherent sexism [today],” Goldbach said. “[But] I really like knowing why people think the other way.”

Goldbach said this inequality doesn’t deter her from the political sector, though. Instead, she’ll use her position to fight it.

Before she competes in any nationwide campaigns, Goldbach said she’ll serve her small town in New Jersey, where she wants to run for Senate in a few decades.

“When I run, I’m going to be ready,” Goldbach said.