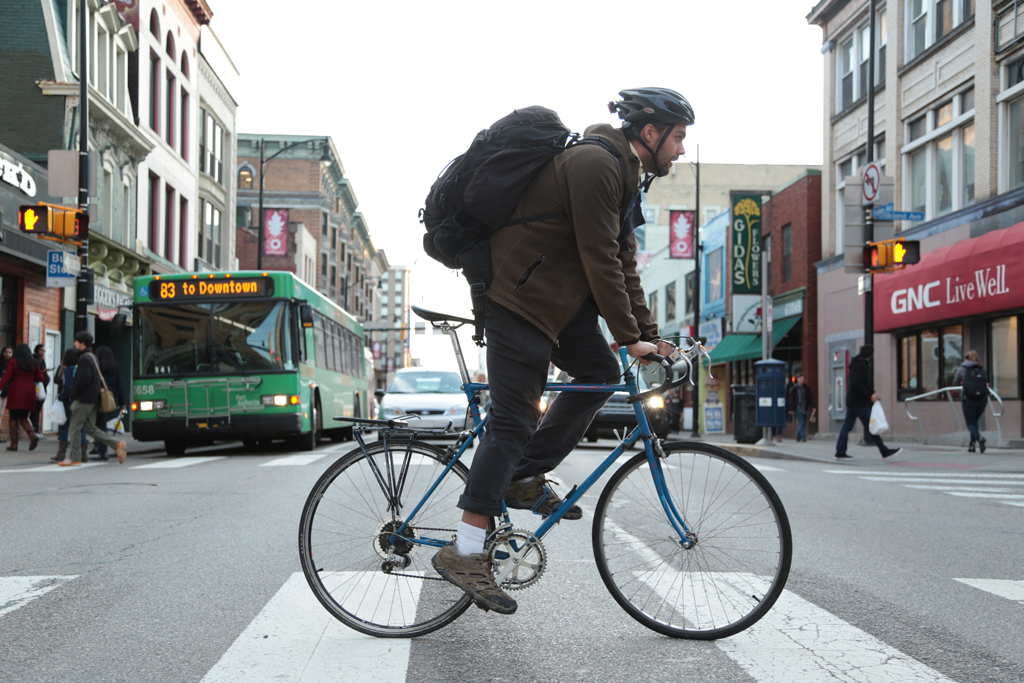 After watching Justin Thakar salvage his dinner from an Oakland dumpster, a man honked his horn and held a $10 bill out his car window.But Thakar waved the man on. He didn’t need the money.

Since 2011, when a friend began leaving him leftovers after his shifts at the Bagel Factory by its dumpster, Thakar, 23, has tried to push the boundaries of middle-class life. The former Pitt student dumpster dives for dinner, couch surfs for shelter and used to work through his calculus and digital logic homework with sidewalk chalk.

Now, he’s off to California to continue searching for his unconventional version of success.

“It just has to do with being frustrated growing up in a very middle-class suburban town and wanting something different,” Thakar said.

Throughout the past five years, Thakar has grown comfortable with his new lifestyle. Now, he doesn’t wait for the street lights to turn on and stores to close before searching for his next meal.

He mainly restricts his diving sessions to commercial dumpsters, where the food is usually still packaged and relatively fresh, and gets about 90 percent of his food from dumpsters. 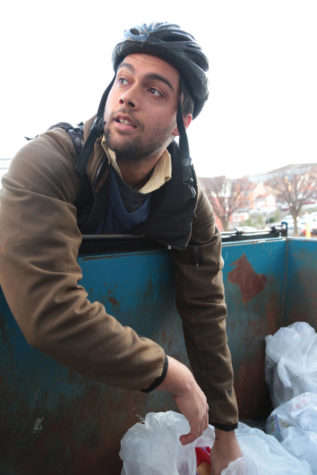 He spent most of his sophomore year of college perched on a milk crate on the corner of South Bouquet Street and Forbes Avenue, first reading scholarly articles about sustainable engineering aloud. He realized quickly the dense articles weren’t grabbing people’s attention, and, mimicking a friend, switched to Dr. Seuss’ “The Lorax.”

Around the same time, Thakar decorated sidewalks with pale, grainy strokes of engineering problems in blackboard or sidewalk chalk, sparking conversation with students passing by.

“It might have been just me being an attention whore,” Thakar said. “[Or] some desire to get people thinking about how school can be made more fun and less of a drag.” 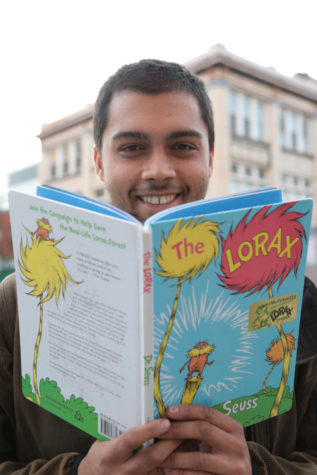 Thakar started studying business at Pitt in 2010, but after three years of hitting the books, he left to focus on volunteer work and eventually travel to California. He traveled through Los Angeles and San Francisco, then returned to Pitt in spring 2014.

Now, after almost two years back at school, Thakar once again feels a break would help him succeed  — prioritizing happiness instead of surpassing career landmarks.

In early March, Thakar packed his weather-resistant bike caddy, took his environmental books out of his Cathy locker and left Pitt for a second time, midway through his junior year.

Taking the Amtrak train part of the way, Thakar met a friend in Seattle and continued the rest of the trip south, then north to Vancouver. Thakar plans to end in the California Bay Area — known for housing intellectual and ambitious people — where he will camp, staying in vans and houses.

There, he plans to keep chalking sidewalks, standing on street corners and writing and publicizing his thoughts, hoping to attract neuroscience and psychology Ph.D. students or doctors and experts in these fields. But Thakar said he will talk to anyone about what stresses them out, or as Thakar puts it, what they obsess over, and how this affects their performance in school.

With these conversations and his own introspection, Thakar is looking to uncover how driven and anxious people manage stress and prevent it from hindering success.

Through this, he hopes to reveal a secret he feels he missed out on.

Growing up, Thakar said he watched his father fret about success, even after he achieved his career goals. Although his father did not have any academic expectations for him, Thakar put stress on himself to attend an Ivy league school.

After he was denied from Harvard University and Carnegie Mellon University, he chose Pitt as a backup.

“[CMU] was where all of the other Indian kids went, what all the dads talked about as the place to go. Like it or not, people compare, especially in those groups,” Thakar said. “I wish I would’ve gotten in — in retrospect, it would’ve killed me.” 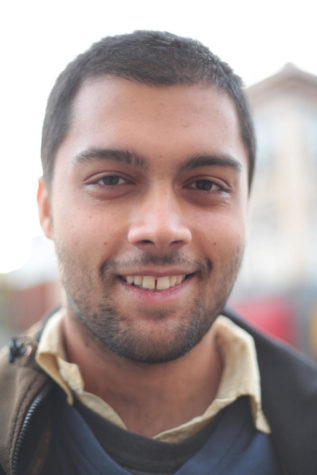 Thakar said he thinks his parents would have led better professional and personal lives if they had “examined their heads,” as he is attempting to do in California.

Now Thakar is searching for what he calls the “sweet spot,” the balance between crazy intelligence, uncanny ability to focus and succeed and an unfettered desire to have fun while doing it. Thakar cites, for example, a Yale graduate he had heard of who was once a crack addict, although he added that drugs did not have to be a part of his equation.

These people, Thakar said, “know how to handle everything” and are who he hopes to meet in California.

“People who still feel comfortable enough with everything life has to offer that they find value in such extreme and wild life experiences and yet are still able and willing to contribute something,” Thakar said.

Thakar said he does not know how long he will stay in California or if he will return to Pitt, but he is determined to go back to college. Ultimately, Thakar wants to leave his mark on the environment by designing sustainable technology and working with solar power and electric grid efficiency.

Until then, Thakar plans to make a living through street art, possibly working at a bike shop or getting an internship in California, while spending most of his time carving a path to his own success through the cognitive roadblock of stress.

“I think it just has to do with sorting out a bunch of beliefs about things like wanting to be special, fearing not doing enough for society, some obscure stuff that seems to be very present in my family. But they don’t think they can handle it or sort it out,” Thakar said. “But I can.”