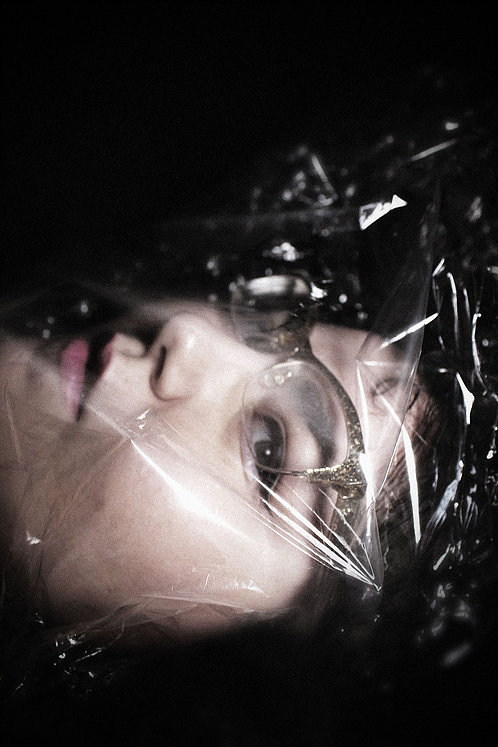 Written by
Photos by
March 29, 2016
Sarah Lane is playing for women whose odds are stacked against them.Lane, a senior and longtime gamer, has designed a competitive, casual game that grapples with women’s real-life obstacles — unequal pay, unstable reproductive rights and high levels of domestic and sexual violence. 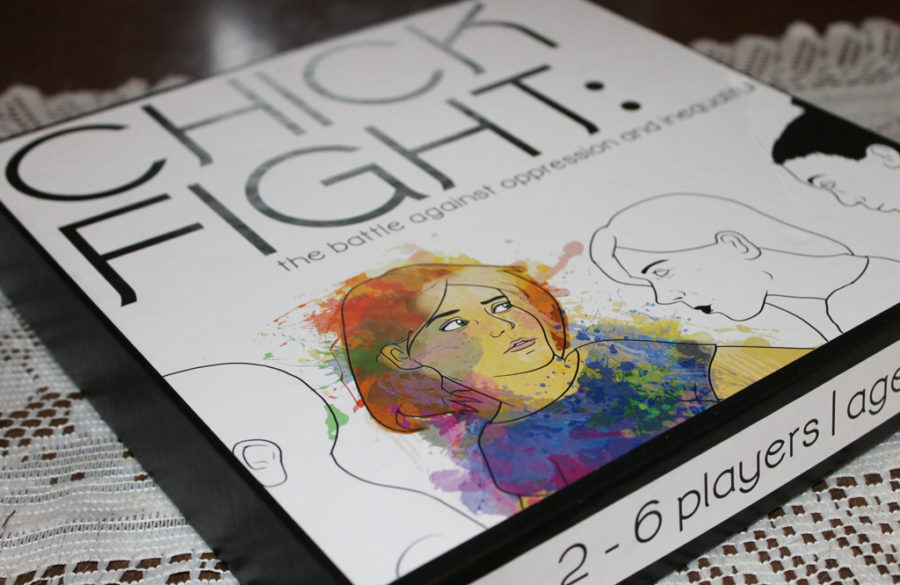 Lane’s Chick Fight is the intersection between the board game Life and feminist rhetoric. Players travel around the board, navigating obstacles while trying to complete three life goals without running out of money or dying.

“I was receiving a lot of criticism from people who thought that a feminist game was unnecessary, and I didn’t want to be accused of coming up with stuff to make the game sympathetic,” Lane said. “So every part of the game is based on a real event that happened, nothing in the game is made up.”

Lane’s own real-life goal is to own a small game design company.

A nonfiction writing major, Lane said she never faced the obstacles in Chick Fight while tinkering with scenarios for her Sims characters as a teenager. While working as a nanny in 2010, Lane discovered her passion for creating board games — an industry men dominate, predetermining the male-centric narratives on the board.

During her time nannying, Lane designed a kids’ game called CreatUrs, where players could choose five original monsters, select their monsters’ favorite attributes and debate their victories in imagined adventures. 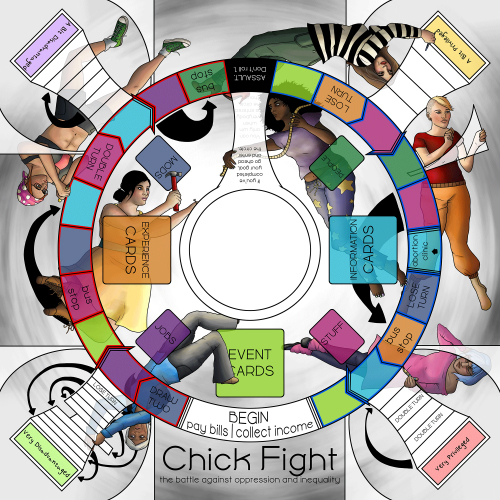 “It caught on like wildfire at the school. We held tournaments, and I started making real cards, not just stuff on notebook paper,” Lane said. “After I had my first set printed, I realized I could probably market it and turn it into a game.”

Lane joined online communities of game players and creators, and found friends who shared her passion.

Her chat room friends started to convince her that the male-dominated industry was safe and open to women — until one game maker shared illustratons of beaten and racially stereotyped women he wanted to use for a deck of cards.

“The only black woman [in the deck] was in a loincloth, and her name was ‘Jungle Girl,’” Lane said. “I said, ‘What about Equal Pay Woman?’ and the response was extremely aggressive. I was told to go back to the kitchen.”

Out of this disheartening experience, Lane said, Chick Fight was born, ready to show the gaming community — both makers and players — the pitfalls women face everyday.

So she approached her Narrative and Technology professor, Brad Fest, and asked if he’d mentor her through an independent study in which she would create Chick Fight.

Through her year-long study with Fest and another professor, Mark Best, Lane logged about 200 hours of research and design time for the game. She based every event in the game off of real life, whether finding inspiration from news stories or from women Lane knows personally.

She conducted surveys on the Amazon Mechanical Turk website, asking women about their experiences, then used the answers verbatim on some of the cards.

Each character’s card gives players a name, ethnicity and percentage of white male’s earnings that she’ll make at her in-game profession. For example, Zoe is a Latina woman who makes 56 percent of her white, male counterparts’ pay.

The game’s measure of “natural privilege” ranges from negative 12 to positive 12, and each player’s privilege points determine the die they’ll use — advantaged, non-advantaged or disadvantaged. For example, a character with negative privilege uses a die with “lose a turn” on one face — something the other dice don’t have.

Each player also draws three goals for their character, and treks through the game board trying to accomplish them — adopt a child, save money for retirement, earn the same as a white male — without running out of money.

Lane said the game resonates with her position as an intersectional feminist — feminism that includes all genders, races, classes, abilities, sexual orientations and ethnicities.

She struggles to see why women are oppressed not only by their gender, but by the entire hand they’ve been dealt in life. Originally, she said, her game ended in a way she considered realistic.

She made it so players could never win.

“It was originally going to be kind of a bitter game that didn’t really end,” Lane said. “You have to meet your goals in the game, and you weren’t going to be able to do that.”

Though players can now win Chick Fight if they pool money, share opportunities and generally work together, Lane said she thinks the game is still too realistic for a mainstream audience.

“I don’t think Chick Fight is ever going to be mainstream because feminism isn’t mainstream,” Lane said. “But I’m hoping the people who do play it will either have feminism re-affirmed for them, or people who didn’t fully understand feminist issues will see them more clearly now.”