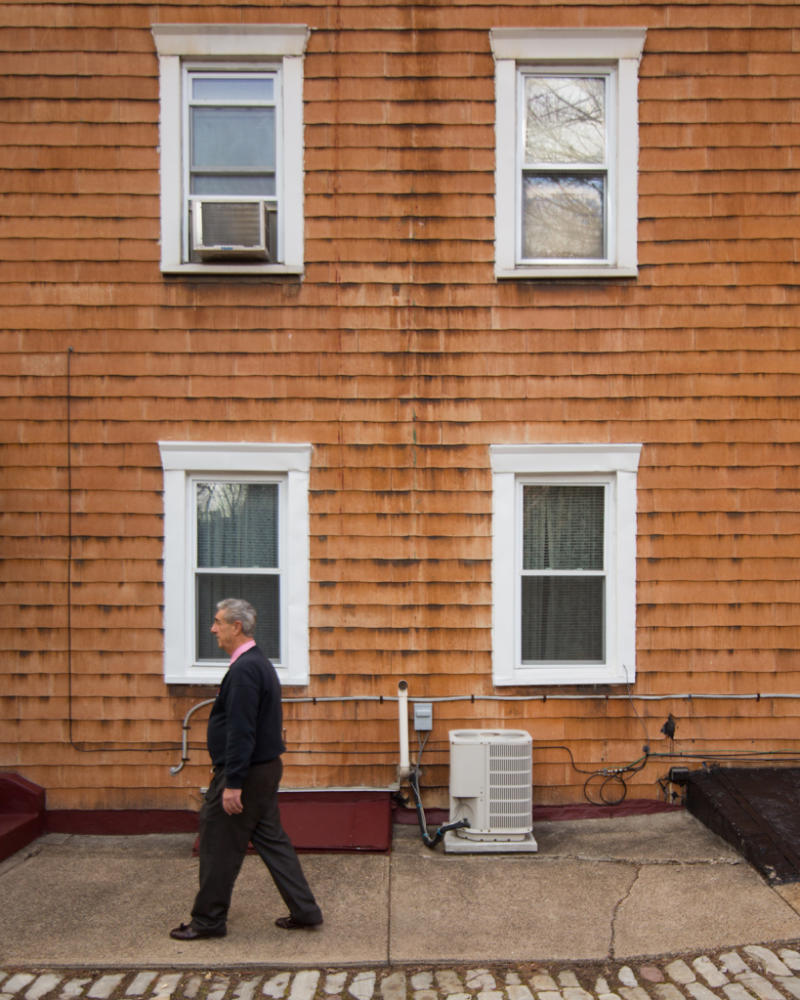 Carlino Giampolo is hard to pin down, but he’s never strayed far from his values — respect and dignity— no matter how far from Panther Hollow he’s gone. By his own definition, Carlino Giampolo is a powerful man. Yet, he’s never held public office, and he’s not very wealthy. But he’s a man of many projects — from cleaning up South Oakland to advocating for city ordinances in Hawaii — and that’s what’s important to him.

“Power is simply the ability to take action,” he said.

Giampolo, now 69, has flexed his power frequently, most recently against Pitt and the city of Pittsburgh. But he’s also a publisher who wrote five books — including ones on golf, Japanese verbs and a collection of his philosophical mantras. And he’s the traveler who’s traversed the globe and danced in all 50 states.

At his core, he’s a passionate Italian-American who’s fought public officials and sucked the marrow from the bone of life. He’s an occasional headache to city officials and Pitt administrators and a community leader to his neighbors.

If you go to the bottom of Joncaire Street in Oakland, you will find a sign made and hung up by Giampolo at the entrance to his neighborhood, Panther Hollow. “Honolulu, 4,660 miles. Pizzoferrato, Italy, 4,630 miles,” the sign reads with arrows pointing toward each. 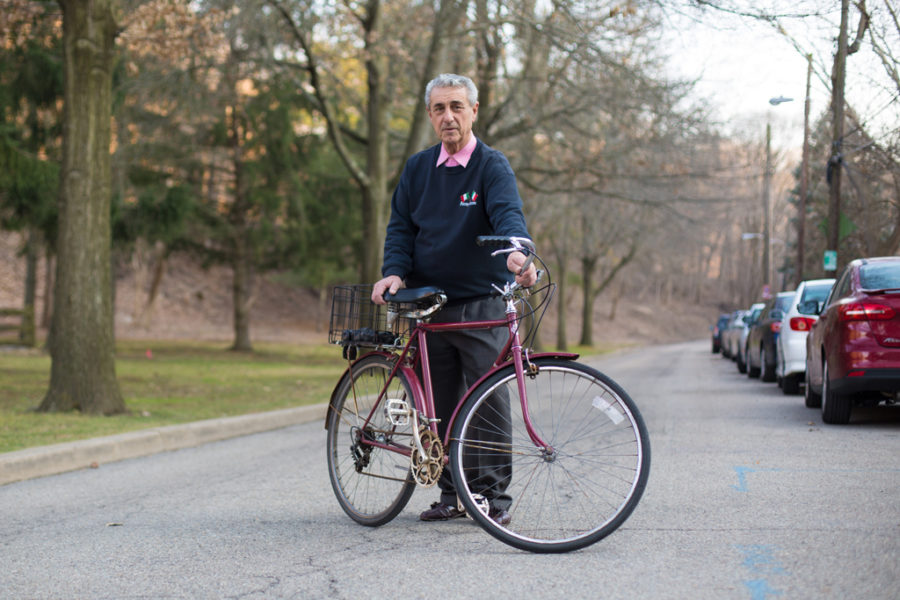 A little further down Boundary Street, across the way from their home, Giampolo and his father built a small memorial, a metal plaque with gold letters, for all of the families who had lived and died in Panther Hollow in the park. Their neighborhood was one of Pittsburgh’s first Italian neighborhoods, as their ancestors, immigrants from the Abruzzi region of central Italy, moved there in the late 1800s.

Giampolo’s Italian heritage and his adopted Hawaiian sensibilities define him, he said. In Waikiki, Hawaii, where he lives for a few months each year, Giampolo protested and petitioned city of Honolulu and state officials from 1988 to 2001 to have the local government remove a set of light structures that he said were an affront to Hawaiian natives.

In 2001, the city of Honolulu passed an ordinance that said all construction in the locale had to be done with “a Hawaiian sense of place.” In response, the hotel replaced the light poles. Giampolo uses that ordinance as evidence for his mantra, “Belief precedes experience.”

“You can have all the ideals and principles in the world, but unless they’re put for the right thing, they don’t have any strength,” he said. 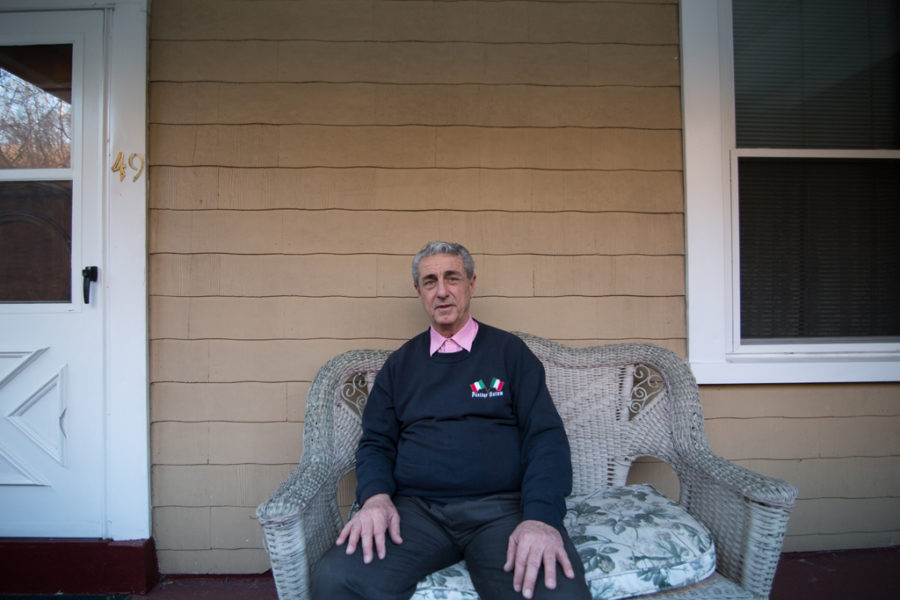 To truly see him, contrast his activism with his lighter side: the part of him that loves travel and relishes the Bruno Mars autograph he received while Mars was still singing as an Elvis impersonator in Hawaii. Juxtapose the angry letters he’s sent to Pitt chancellors Mark Nordenberg and Patrick Gallagher with his goofy smile as he shows off the fake Wheaties box that advertises his dominance as the “opposite-hand pingpong champion.”

Never married, Giampolo worked as an insurance claims adjuster and construction worker after he received his bachelor’s degree from Duquesne University in 1971, intermittently spending time in Hawaii.

“So I asked myself, do I want to spend another year in Hawaii, do I want to buy a car or do I want to travel?” Giampolo said. “So I go to the bookstore, I get a map of the world and I lay it out and I say, ‘All right, here’s Hawaii, here’s Japan and Thailand and India.’”

Later, in 2004, after his activism in Hawaii, he and a close friend traveled stateside, trying to hit all 50. There were two rules: stay at least one night and dance in each state.

He did it, too, then returned home to Panther Hollow, to his duplex on Boundary Street. No matter how far he traveled, he always ended up back in his birthplace, the place of his heritage, the place where “everybody knew everybody.”

Now, his “Save Panther Hollow” project aims to stop the city from building a multi-lane road across the street from his house. He’s been emailing, meeting with and sending letters to both Pitt and city officials for about six months. It’s his latest project, following his campaigns against litter and overcrowding in South Oakland.

His aim, he said, isn’t money, power or anything he could win in a courtroom. He just wants to protect his neighborhood.

“Everything you begin, in order to have it be meaningful, should begin out of love. I love that community,” he said. “That’s my birthplace, that’s my heritage there.”

Giampolo, who knows he is growing old, has an intensity in his sad gaze when he talks about the proposed road. But when the sadness leaves his eyes, it’s clear he intends to fight until one of his neighbors has to add his name to the Panther Hollow plaque.