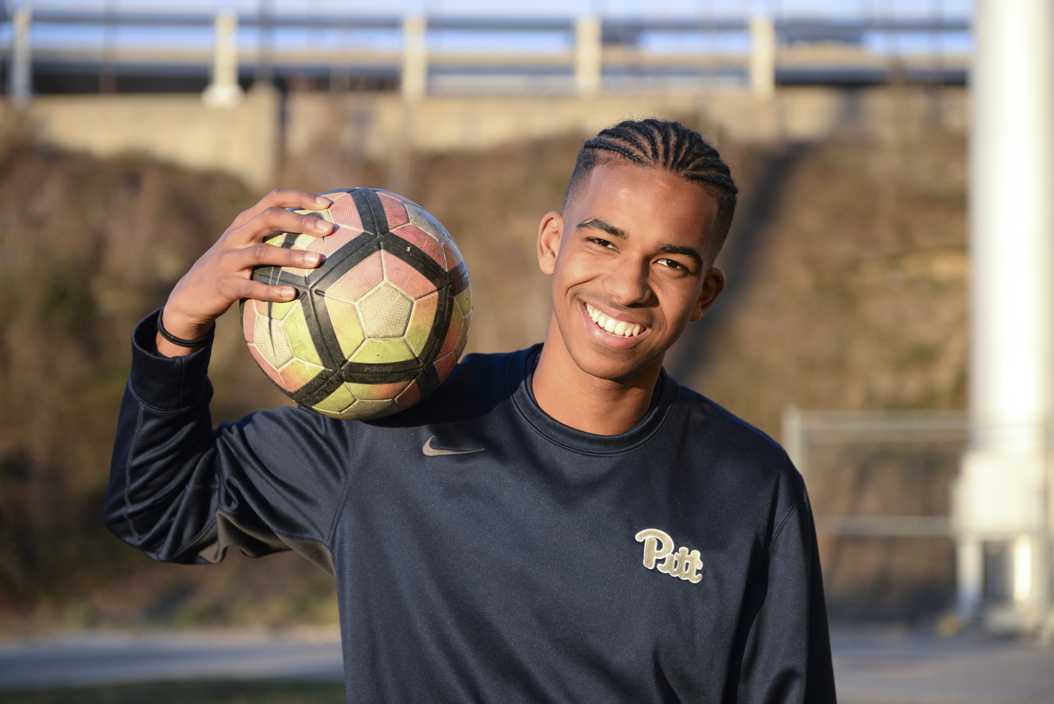 Sitting in his bedroom with his chin in his hand, junior Roosevelth Angulo samples short riffs from existing hip hop music, searching for the perfect loop to add to his own creation.

He uses a few fingers to deftly navigate his laptop, a keyboard and a drum pad, silently forming the beat for a new song, letting the melody fill the space.

Surrounded by posters, flat-brimmed hats hanging from the wall and a white board above his bed detailing his goals for the rest of the soccer season, the Pitt forward has been producing music in his college room since he got here.

What started as a hobby — messing around with different computer programs — has become a passion for the Canadian native. Angulo is gearing up to release his first hip-hop mixtape in mid-April, thanks to the help of a group of friends he says just “popped up” in his Toronto apartment looking to kick around a soccer ball when they were young.

Though he comes up with music alone, his sound and style was forged in his community. 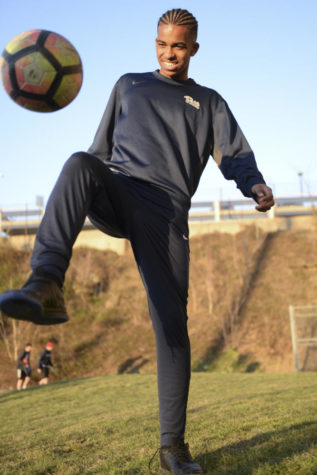 Angulo spent 13 years at a 6-story apartment complex in Toronto, where he played soccer with friends, battled through Xbox games with his stepbrother and chowed down on his mother’s Spanish dishes.

When they grew beyond the playground, he and his group of friends began pouring after-school hours into creating an art collective — a collaborative group that experiments with different art forms — during their junior year of high school. The group’s talents range from graphic design and photography to rapping and songwriting, and they’re collectively called Rhozeland, after a park they played in as children and relaxed in as they got older.

An upcoming album — titled “8932” after two bus routes near Angulo’s childhood apartment — is the collective’s first major project, and will pay tribute to their hometown and the community they found there.

Mount Dennis, where Angulo grew up, is considered one of the most diverse urban neighborhoods in its slice of Toronto. With an average annual household income of about $50,000 CAD (about $37,371 USD) and 14 percent of the neighborhood unemployed, Angulo said, “It wasn’t the worst place in the world, but it wasn’t the best either.”

“We all wanted to get better at what we were doing, and we didn’t see any opportunities or people to teach us,” Angulo said of the community surrounding the artists in high school. “So we decided to just start this collective and go together as artists.” 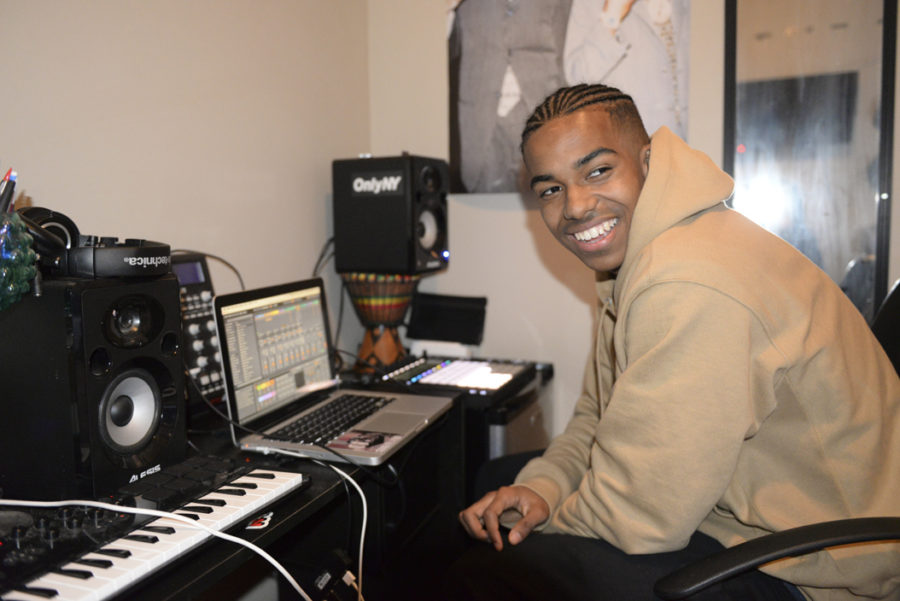 Rhozeland’s most recent project includes references to the exterior of Angulo’s childhood apartment building, including the building’s nickname “Whitebricks.”

There, neighbors became family Angulo said, which was especially important for times when they experienced rifts within their actual families.

The faces of current residents dot the music videos, as well as details about the emotional difficulties people felt inside the walls of their community: dealing with the death of young parents, growing up with a father behind bars, navigating their way off the “wrong path.”

Through electric beats, constant loops and bright sounds, the music and its lyrics tell the stories of a neighborhood.

“This is how these guys grew up, so I feel like, you know ... people should hear it and take it into consideration,” Angulo said. “This is how I grew up, too. That’s why I’m proud of it.”

Angulo said his story is one of helping his friends rather than dwelling on his own experiences — but at 14 years old, Angulo lost his father to cancer. His father’s illness came after years of a sporadic relationship, followed by months of making up for lost time sitting beside his hospital bed. Growing up, he would often visit his dad, a former professional soccer player in Ecuador, on the field. Watching his footwork at games, Angulo knew he wanted to follow in his steps. 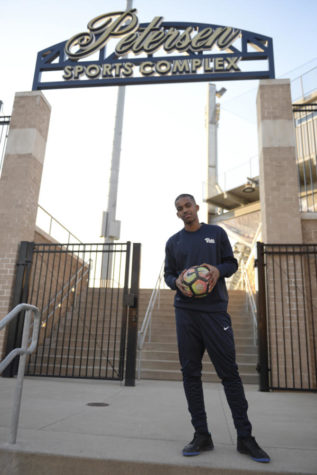 “I definitely looked up to him — I wanted to be just like him,” Angulo said. “I guess him and my mom didn’t get along, so that’s just the way it was. I didn’t really care, I just wanted to be with him.”

Following his father’s lead, Angulo started playing organized soccer when he was about 12 years old and continued playing for both his high school and club teams. His high school days were filled with tossing the ball around or messing with musical tracks, aiming for goals and hit sounds. In his sophomore year, he realized it was time to focus more energy on his schoolwork to get the grades he needed to play soccer in college, the logical step to one day making it as a player in Major League Soccer.

“I was just playing as much as I could, staying fit and focusing on my school work,” he said. “I knew if I didn’t have that then I couldn’t get here.”

Between studying for the SAT, working out and focusing on his nutrition, Angulo became the first member of his family to graduate high school and attend college. He was recruited to play for four schools: South Carolina University, James Madison University, Mercer University and Pitt. He chose Pittsburgh because he was hoping the city campus would most mimick the urban feel he was used to in Toronto.

Though Pittsburgh didn’t live up to expectations set by his hometown, his days at Pitt follow a similar routine to his high school patterns: mornings training with the team, afternoons in class and producing music as often as he can.

A poster of Snoop Dogg and Tupac standing beside each other hangs by his work station in his bedroom, just another symbol of how he uses other artists’ success as motivation to learn more. Each member of Rhozeland was self-taught through the internet, mostly using YouTube videos, so Angulo lets his ear determine what his music will sound like.

“It’s one thing making the beats and having them finished and they sound the way you want them to,” Angulo said. “And it’s another thing when someone takes those beats and makes something new, which is what those rappers did [in ‘8932’]. They took the songs and took it to a whole other approach.”

“It’s about finding that one thing I can build off of. It could be anything, it could be just a loop I heard or a jump pattern I made,” Angulo said. “It’s the only way to do it, and wherever it goes is wherever it goes.”

This story was made possible with a grant from the University of Pittsburgh’s Year of Diversity fund.