Sana Chowdhry hunches in the corner of the stairwell on the 28th floor of the Cathedral of Learning, her backpack, lunch bag and coat sitting on the ground next to her.

A full-body covering, headscarf and face veil drape over her petite frame, leaving only her slender hands and brown eyes exposed. Every few minutes, she reaches her hand up to pull the face veil slightly down the ridge of her nose — it often rides up just a little too close to her eyes.

The stairwell is her favorite place to study, she says, because the hard surface strengthens her back and keeps it from hurting.

The veil muffles her voice slightly and obscures her facial expressions — but her eyes are kind and soft, crinkling slightly at the corners in an obscured but still noticeable smile.

Chowdhry — a senior studying history, global studies and Arabic — is a devout Muslim. She began wearing her face veil after her 21st birthday two years ago, as a way to keep her focus on God amidst a hectic schedule including classes and an hour and a half bus ride from her home in Monroeville to campus. 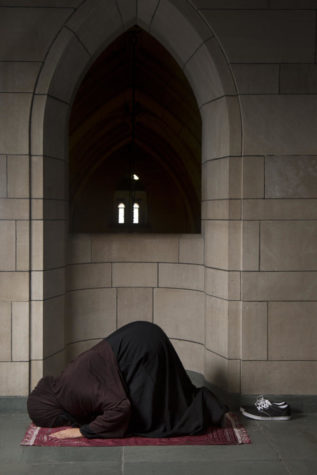 “I wanted to do something that would remind me of God,” Chowdhry said. “Because the headscarf is just like clothes — after a moment you don’t realize it’s on. But [the face veil] is like, ‘What is this on my face?’”

For reference: Headscarves are often called “hijabs” but Chowdhry prefers to use the original religious word “khumr” or the English translation “headscarf.” Chowdhry also uses the religious terms or their English translations when she refers to her full-body covering — “jilbab” — and face veil — most often called “niqab.” Though there are many Pitt students who wear headscarves, Chowdhry has never seen another student on campus wearing a face veil.

Chowdhry was born in the Pittsburgh area of Natrona Heights, but spent her early teenage years in her parents’ home country of Pakistan. After leaving Pakistan, Chowdhry lived in Canada and then moved back to Pennsylvania. She and her family now live in Monroeville.

Growing up, Chowdhry followed the example set by her parents, who are practicing Muslims, and went through all the motions of religion. She has always worn a headscarf, for example — but mostly because it saved her from wrestling with her curly hair.

Through middle school and high school, Chowdhry saw Islam not as a way of life, but as a set of obligations and rituals. In part, this was because Islam and its religious trappings had always been a part of Chowdhry’s life. But when Chowdhry was 14 years old, she began to notice and worry about the corruption and injustice within majority Muslim countries — some of which she saw around her in Pakistan. She believed many of the stereotypes about Islam as a sexist religion, and wrote it off as something she didn’t want to be involved in.

When Chowdhry began homeschooling through ninth and 10th grade — which is the last year of school in Pakistan — she discovered something that, unlike religion, she could immerse herself in: the internet.

She taught herself Photoshop and the basics of graphic design and digital illustration, and built friendships with people from as far as Israel and Eastern Europe through the website DeviantArt.

“That’s what kind of took me out of my little bubble — that there are people around the world and everybody matters,” Chowdhry said. “I was exposed to more ideas.”

As she learned more about the world outside her own experience, Chowdhry also began searching for a religion that would ring true for her.

“I didn’t want to be Muslim [because] my parents were Muslim,” Chowdhry said. “The last religion I actually considered was my parents’ religion.”

Chowdhry used her latest refuge, the internet, to begin her search. Wikipedia told her she couldn’t convert to Judaism, so she scribbled that off the list — only finding out later the Wikipedia post was wrong. She then considered Christianity and Catholicism in particular, but the beliefs didn’t resonate deeply enough.

During this time, when Chowdhry was 16, her mother suggested sending her to a women’s-only boarding school in Mississauga, Ontario, for a year-and-a-half-long intensive course in the history and theology of the Quran.

Although Chowdhry was, at the time, still primarily interested in graphic design and living on the internet, she was also struggling for independence and eager to move out of her parents’ house. Thinking of freedom, she agreed to go to Ontario. During her time in Ontario, Chowdhry began to reorganize her life and worldview.

She questioned her teachers incessantly.

Why do you cover up your skin?

What about domestic abuse?

In Ontario, Chowdhry’s teachers began to answer her questions, and she learned that the sexism and violence that surrounded Islam in Pakistan — particularly for young women immediately before or during their marriages — were based on cultural, rather than religious, issues.

Although the problems still concerned her, she realized they were a result of human failings and misinterpretations of the Quran — not failings of Islam.

“I went [to Ontario] genuinely because I wanted to learn, because growing up, you hear stuff about religion,” Chowdhry said. “I was Muslim, but I still [believed] everything that people said, I was like, ‘Yeah, it’s a racist, sexist religion.’”

Through reading the Quran directly, she saw the religion actually focuses not on hate or hierarchy, but on love for others and for God.

It was a belief system she could get behind. Now, Chowdhry’s entire life revolves around practicing Islam.

She does her best to eat well and to exercise, following through on an Islamic doctrine to take care of one’s body. She prays five times a day — at dawn, midday, late afternoon, sunset and once it’s dark — even if it means taking a 10-minute break from a class.

“I just live religion in a way — it’s a lifestyle,” Chowdhry said. “You have these moments where you really think about God, but other times you just live it.”

Amidst the travel ban on Muslim countries instituted by the Trump administration and stereotypes of Islam as a violent religion, Chowdhry said she has a vague recollection of being the target of racist comments. But it’s not something that sticks with her. In fact, she can’t even recall any particular instances.

“Even if I have dealt with racism, I don’t remember because for me, I guess it’s a religious concept — forgive and forget,” Chowdhry said. “I don’t remember their face, because I genuinely wish well for them.” 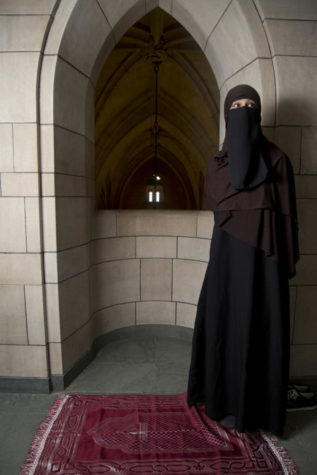 Most of the time, though, questions directed at Chowdhry are not based in malice, but in curiousity. In some cultures, face coverings indicate that a woman is married, so even though she is not married, people will sometimes ask Chowdhry about her relationship status. Other times, strangers — particularly in the women’s bathroom — will ask Chowdhry why she wears a headscarf or face veil at all.

“I personally don’t mind getting questions. I’d rather have you ask me than look it [up] online,” Chowdhry said.

Helping others, in line with the Quran’s teachings, is Chowdhry’s motivation for going to college, and she plans to become a teacher or professor after graduation. Chowdhry was also a teaching assistant for Arabic I during the fall semester.

“As a Muslim, whenever you relieve somebody of any calamity, any burden ... you’re doing your civic duty as a person in the community,” Chowdhry said. “For us, you’re kind of accumulating good deeds.”

Despite her previous inclination to turn to the internet for answers, and in part because of misinformation about religion that she gleaned from online sources, Chowdhry now sees the value in being an educator whenever possible.

“Before I got this new set determination to go to school to become an academic, I guess I wanted to become a professional couch potato,” Chowdhry said. “I would never get out of bed in the morning if it weren’t for, I guess you could say, my faith.”