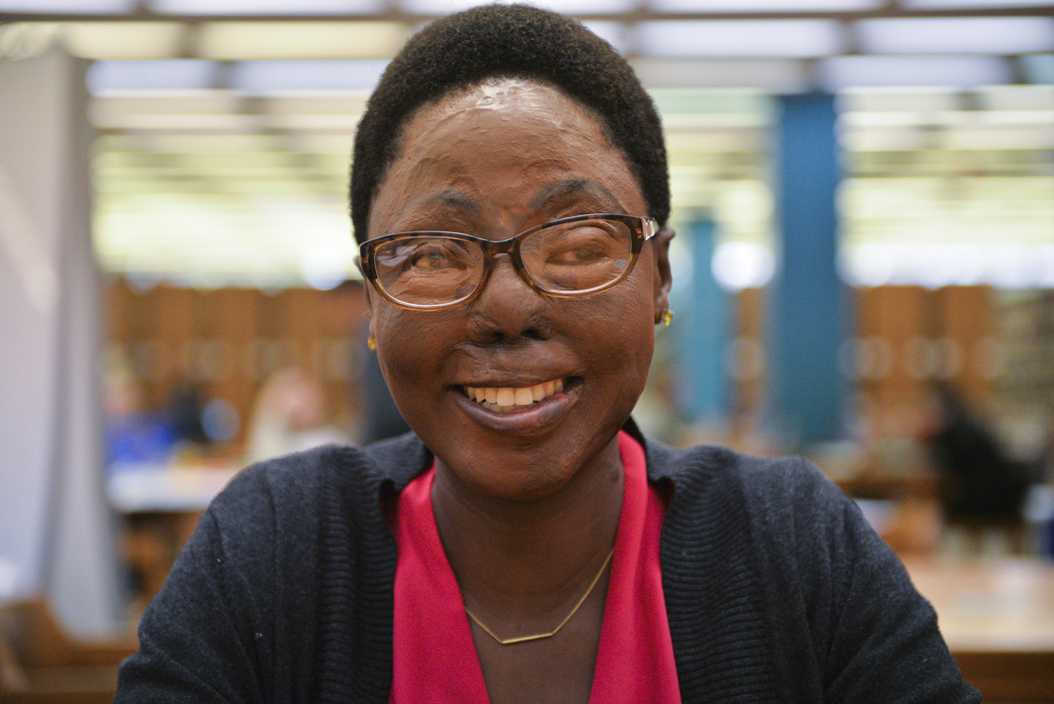 In many ways, Hanifa Nakiryowa is like any other single mother — striving to make a better life for her 7- and 10-year-old daughters than the one she left behind in Uganda.

She gets up at 3 a.m. and wakes her girls at 6 a.m. for breakfast. At 7:30 a.m., they’re off to school. By that time, Nakiryowa has already spent three hours completing classwork for the master’s degree she’s pursuing in international development and human security at Pitt’s Graduate School of Public and International Affairs.

Like many other single parents in their mid-30s, Nakiryowa has an intense commitment to raising strong, independent women. But the lines on her face tell a deeper story.

Scars — spanning Nakiryowa’s cheeks, forehead and eyelids, extending down her arms — have affected her children’s lives as much as her own. 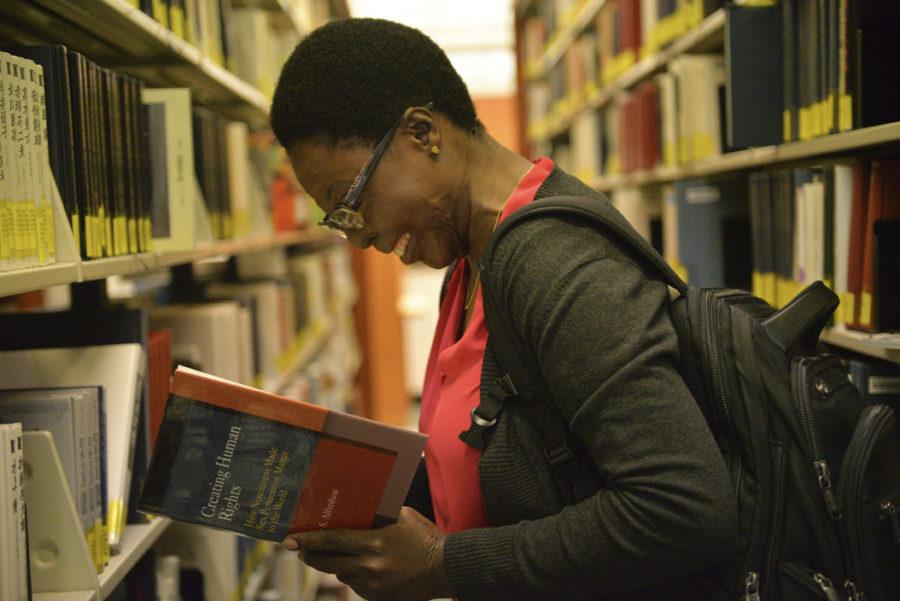 “[My daughters] see how [people] stare at me. In Uganda, they had to explain so much why their mother looks the way she looks,” Nakiryowa said. “Seeing how my girls have to struggle to live with my appearance ... It’s tough.”

Tough. It’s a simple way to explain a story that required more from Nakiryowa than mere grit. In 2003, when Nakiryowa was a student at Makerere University in Kampala, Uganda, she met Faisal Buyinza, her lecturer at the time.

By the time of Nakiryowa’s college graduation in 2006, she and Buyinza were expecting their first child. Days after giving birth, Nakiryowa received a congratulatory text from a male friend, prompting a jealous Buyinza to bar her from the on-campus flat the two shared.

Though he soon accepted Nakiryowa back into his life, he demanded she abandon her career to care for their children. Nakiryowa, ambitious and independent in a manner considered unconventional to many in Uganda, couldn’t stand the arrangement. In early 2011, she fled the degrading marriage with her daughters to seek refuge at her brother’s house, also in Kampala.

Buyinza convinced Nakiryowa in mid-December 2011 to let him see their daughters for the first time since their departure. That night, she went to pick her girls up from the same on-campus flat the family once shared together. As she awaited her estranged husband’s response to her knocks on the door, a man whom she could not identify walked by, kneeled to the ground to unwrap something and, before she knew what was going on, dumped a vat of acid onto her face.

She screamed in pain, blinded by the caustic chemicals — the face that had become so naturally tied to her identity, gone forever.

Moments after the attack, Nakiryowa cried out for help from the father of her children, but it took some time for him to answer the door. When he finally responded, the two girls ran ahead to console their mother, but the youngest slipped on the acid and fell. Like her mother, she has visible scars to this day, canvassing her right side and arm. 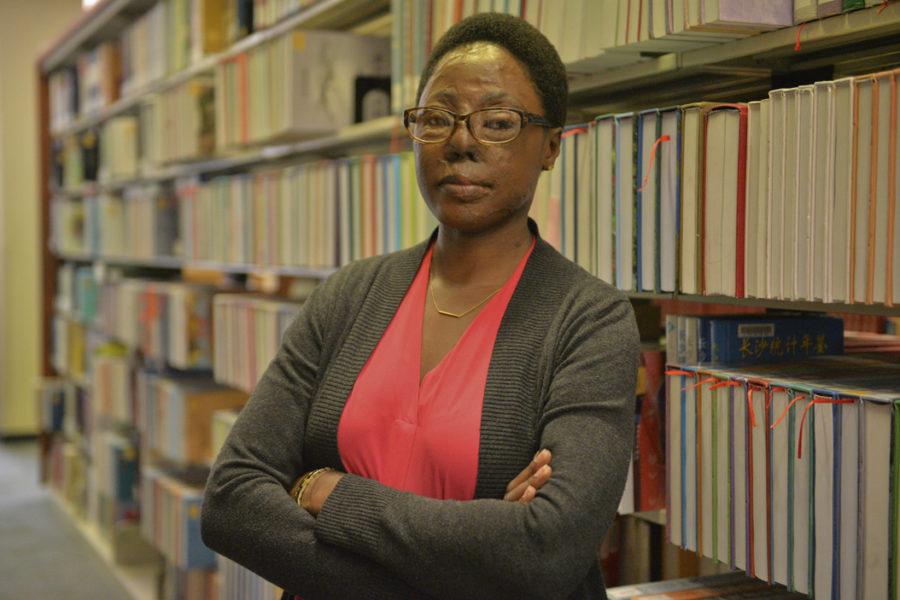 Nakiryowa feels the physical and emotional repercussions of her attack daily, but she finds strength in her two daughters, whose names she’s asked to withhold for privacy.

“I still go through that pain, but it still does not stop me,” Nakiryowa said. “I have two beautiful ladies that derive their strength in me. I must be a good role model for them no matter what.”

After the attack, Nakiryowa was confined to the hospital for three months. Her family reported the incident to local police, along with their suspicion that Buyinza had organized the attack as a retaliation against Nakiryowa’s flight from him. The prosecution dropped the case, however, without serious investigation, largely due to the corruption and inefficiency that characterize the Ugandan criminal justice system. After leaving the hospital, Nakiryowa filed her own complaint to have the case reopened, but when the claim finally reached court, Buyinza was released on bail — and Nakiryowa withdrew from her battle with the legal system to seek justice elsewhere.

It was during her pursuit for the children of acid attack survivors through an orphanage called Bright Kids Uganda that Nakiryowa met Louis Picard, Director of the Ford Institute for Human Security here at Pitt, who convinced her to pursue a master’s degree in Pittsburgh.

By this point, disenchanted with the justice system in Uganda and already considering a move, all Nakiryowa wanted was to heal and start her life anew. So she picked up and moved her children to the United States where she could pursue her passions for education and community service with a friend by her side. Now, five and a half years later, she speaks candidly about her attack.

“You meet so many women who have been disfigured by acid attack violence, but you've never really seen them until you're a part of them,” Nakiryowa said.

Before leaving Uganda, Nakiryowa found it difficult to conjure the same strength she now exudes. She grew up rooted in Muslim traditions and, as such, was expected to continue wearing her hijab after the attack. The pressure made Nakiryowa feel like she was hiding. The act of dressing her face made learning to accept her new appearance, and teaching others to do the same, nearly impossible.

“I was expected to cover [my face], but what am I covering? I do not have a face,” Nakiryowa said. “Each time I put on my veil I was tempted to hide. But I told myself I have to accept who I am and let the public accept me. This is me. I had to unveil.”

Nakiryowa raises her children with the same resolve faith once allowed her — but none of the oppression.

“I show them the value of knowing God and trusting God. That, they know,” Nakiryowa said, explaining the family’s adherence to spirituality, without structured religion.

Unveiling became the embodiment of Nakiryowa’s resilience and, eventually, the mission of her organization, the Center for Rehabilitation of Survivors of Acid and Burns Violence Uganda, which she founded in 2012. CERESAV works with acid attack survivors, presenting them a platform to speak out and providing job training and social support in an attempt to reintegrate survivors into accepting communities.

“[Acid violence] generally happens in countries where women's voices are really suppressed,” Nakiryowa explains. “It's institutional oppression that is largely accepted ... So when it comes to acid attack, it's a woman to blame.”

Amid her homework and advocacy, Nakiryowa devotes herself to her family. Her face lights up as she talks about her daughters and their ardor for learning. She flashes a wide, toothy grin as she explains how her older daughter’s enthusiasm to read humbles her. Nakiryowa explains how she never voluntarily read until after her attack, when she began using books as motivation to recover through her ability to continue learning. Now she finds her daughter, an hour after bedtime, refusing to put down the latest book she’s picked up.

After her attack, half of Nakiryowa’s mouth was melted. The muscles in her lips were so contracted that it was not possible to form a smile. It took more than five years and 28 reconstructive surgeries for her lips to painlessly curve in a manner that once again reflects the humor and wonder her children inspirit. So, she says, she does not smile lightly.

“I try to show them that, irrespective of my appearance, I can be as any other ordinary mother,” Nakiryowa said.

Her daughters, playful and boisterous, illustrate a scene on the whiteboard of a Hillman study room one day in late March as their mother looks on, laughing. One displays a colorful polka-dotted bedroom with the two girls holding hands, the other, a pretty portrait of a young girl named Violetta. The girls’ concentration persists as Nakiryowa explains how she encourages their creativity by restricting TV usage to family time. Instead, she asks them to create other distractions as she finishes up school work.

“There are days when it’s really tough and I can’t hide it from them,” Nakiryowa said. “And [the oldest] will always see it, ‘Mommy is everything okay? Did you sleep well?’”

Through them, Nakiryowa finds the strength and motivation to tackle the challenges of being a single mother, a student, an advocate and a survivor.

“Regardless of [my] struggles, I am working hard to give [my daughters] a good life so they can become independent, strong women in the future,” she said. “It’s a handful, but I’m happy I’m doing it.”