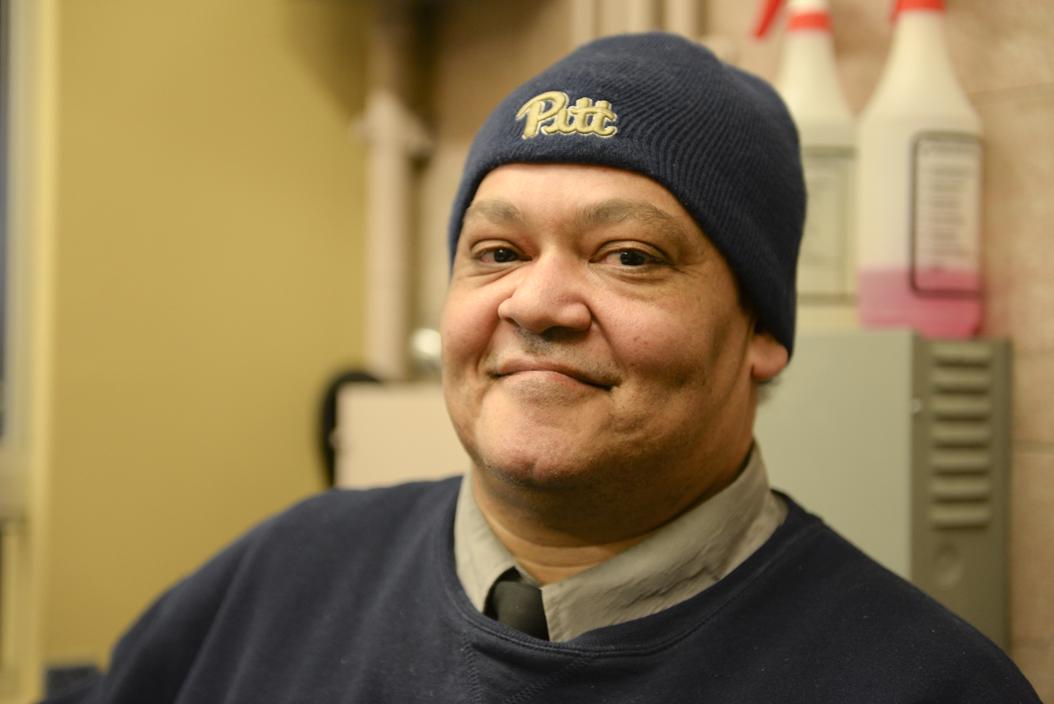 At exactly 11 p.m. Sunday through Thursday, Ricky Smith calls his boss from the security booth at Holland Hall North to let him know he made it in. Then he settles back in his chair and waits for returning residents, a welcoming smile on his face and a Pitt hat pulled proudly over his graying hair.

I know Smith only a little bit, as the nighttime security guard who greets me with a grin every time I slump in tiredly from a late night at the news office or a long night of studying at Hillman. He usually reads at least two different papers while he’s in his booth, and The Pitt News is one of them. After pointing out my articles, telling me he thinks what I’m doing is cool, he might toss in a joke about the weather or politics.

His candor makes me feel a little bit better no matter how exhausted or stressed I am when I come back to Holland. I thought, if he does that for me, he must do it for other wired college first-years, too.

During the first hours of his shift one chilly Monday night in March, I sat with Smith as he swiped in young women coming back from study sessions, jobs and friends’ dorms, dragging their feet and rubbing their eyes.

I noticed they perked up a bit when they saw the familiar guard, his gap-toothed grin widening every time someone new trotted into the lobby. His stout, round face beamed as he told corny jokes and inquired about their days.

A blond woman came into the room one Monday night, boyfriend in tow. Smith grinned when he saw her, threw his arms back and spun around a bit in his chair.

“Melanie Du Bois!” he cheered. “You’ve got one of the coolest last names in this building, I think.”

Du Bois, a first-year political science major, told me Smith always rallies her spirits: “He helps me end my day on a good note.” 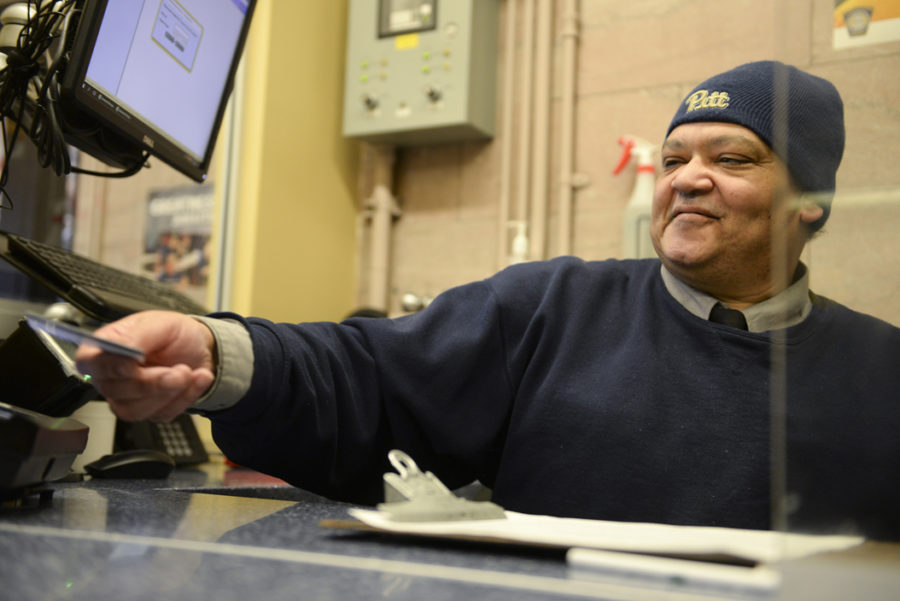 Smith has been a nighttime security guard with U.S. Security Associates at Pitt since 2010, and has also worked at Nordenberg, Brackenridge, Litchfield Towers and Pennsylvania Hall during his time here.

“Best job I’ve ever had, hands down. Love the people,” he said. “Plus, you know, I’ve always been a fan of the University, so being immersed in the heart of it is great.”

At a young age in the early ’70s, Smith would visit the local Children’s Hospital — which used to be near Pitt’s campus — for allergy treatments. The campus, he told me, was much different than his small hometown of Ford City — 40 miles northeast of Pittsburgh.

“The only excitement that happened there was when the stoplight would change,” he said. “When I would visit Pitt though, everything was bustling, exciting, alive. I figured, man, this is a cool place, I want to be around a place like this someday.”

Even after his Children’s Hospital visits ended, Smith remained a Pitt fan, religiously following Panthers’ football games as a teenager. He kept up with the stats while getting his associate's degree in broadcasting at Williamsport Area Community College, and for the six years in the ’80s he spent living in Washington, D.C., where he shuttled cars from airports, canvassed for phone banks and used his degree to get work as a sports announcer.

“God, I loved it down there,” he said, tones of nostalgia dotting his voice. “There were a ton of other black people, it was so diverse. The action reminded me of Oakland.”

Eventually, though, the rising cost of living forced him to move back to Ford City in 1991, where he met his wife four years later. They eloped, and he moved with her to her home in Mon Valley.

“It was good to be back on a city scene again,” he said. “But unfortunately, my marriage didn’t go in the right direction.”

Smith’s voice quieted as he told me this next part, beginning to open up about the worst thing he’s ever done. His normally cheery face drooped as his eyes began to water.

“It was early in the summer of 1999. We were having this argument,” he started. “It was a silly argument, something trivial, but we’d been having ones like them a lot.”

He paused for a moment, took a deep breath, then continued.

“My wife was yelling loud enough for the neighbors to hear, and I wanted her to quiet down, but she wouldn’t, and I was getting angrier and angrier ... and then I handled the whole thing incorrectly.”

He blacked out for a minute, and when he came to, realized he had choked and punched her.

“When I came back to myself and saw what I did, I was a basket case. I booked it out of there immediately. Only took a minute to grab some stuff, then moved into the basement of the building we were living in,” he told me.

Smith lived in what he refers to as “The Dungeon” for almost two months. He ate nearly nothing, save the peanut butter crackers his landlord would slip him, and slept little.

“I had my music, but I didn’t listen to it. I just went to work, came back and just laid in my makeshift bed and felt like crap,” Smith said.

It was the first time he ever had suicidal thoughts. His mood had already been dark due to the deaths of his mother and best friend earlier that year, but now he was seriously considering killing himself. 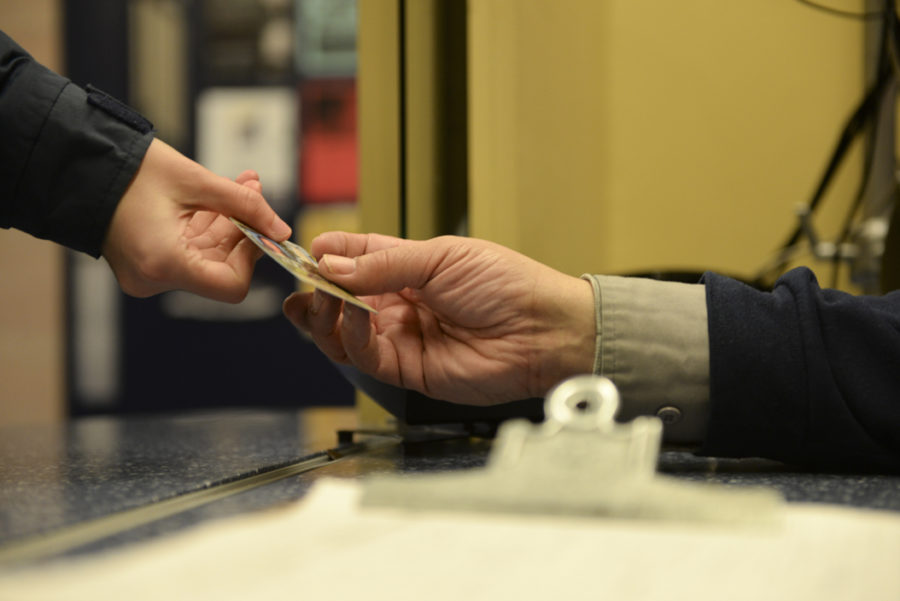 “I would walk past a railroad every day on the way to work, and I’d consider just standing there and waiting for a train to come hit me,” Smith said. “I was depressed as hell, and I was terrified of seeing my wife again.”

He returned to The Dungeon a couple days later, still miserable. Then his wife did something which to this day he finds unbelievable.

“She peeked through the basement door, said she actually wanted to talk about what happened,” he said. “I was a mess. I apologized like hell, bawled my eyes out. I hugged the life out of her.”

With the knowledge that his wife was willing to let him work to regain her trust, he ventured out to the first church service he’d been to in a while.

“Longest service I’d ever been to,” he said. “I was burning with shame the whole time. But I sensed hope within myself after that. The faith my wife had for me and the faith the church had in me, that was enough to help me climb up out of The Dungeon.”

Smith got a job as a bus driver shortly thereafter, which he said also helped boost his confidence. Unfortunately, his marriage was never quite able to find contentment, and though he never laid a hand on her again, Smith and his wife split in 2004.

He left his job as a bus driver in 2006 and worked for the Contemporary Services Corporation as a security guard at PNC Park, Heinz Field and the Petersen Events Center starting in 2003. He’d worked briefly in the security field before in the mid-90s, and was happy to return to the work. He liked the job because he got to make small talk with visitors. And, he could hang around during Pitt athletic events — “It was a challenge, biting my tongue to keep from cheering or booing during a college game,” he said.

CSC’s contract in Pittsburgh ran out in 2010, but an office manager of his helped him get a job with U.S. Security Associates at Pitt.

“Man, I was so happy to get a job here,” Smith said. “It was like coming home. I loved this place as a kid, and I’ve followed the University athletically my whole life.”

He still hears old voices from The Dungeon calling to him at times — motivating his mission to put a smile on the face of every student who hands him their ID.

“TV and papers, they say that suicide rates are off the charts for college kids, because they’re depressed and under stress,” Smith said. “I still remember when I was in that bad place, it was sheer hell. None of the students here at Pitt deserve that, so I try to make silly jokes and ask them how they’re doing, take whatever edge off they might be feeling, even if it’s only for a second.”

Smith said he hopes he’s having as big of an impact on the students here as they have on him.

“If there’s one thing they’ve taught me, it’s to keep striving, no matter what,” he said. “Seeing them work hard has inspired me to keep going, too.”

Between midnight and 1 a.m., I watched him wave at people walking out and joke around with those returning: “Waiting for your friend to come down?” he says to one woman. “Well, I’m waiting for Halle Berry.”

Amanda Brownsberger, an undeclared major pursuing French, told me her favorite thing about Smith is his jokes.

“Me and Ricky, we have this thing where he always changes the first part of my name to a different color when he swipes me in,” she said. “I’ll come in and he’ll be like, ‘Oh, hey Amanda Redsberger.’ It makes my night.”

In between the coming and going, he talks to me about politics, sports and his favorite TV show as a kid — “Man, I was in love with the ‘Bionic Woman.’” I get to see a picture of his younger brother — “First black valedictorian at our high school. I’m proud of him. He’d kill me for showing you this picture.”

At 1:30 a.m., he’s got another six hours in his shift, but I’ve got to go. I exit the booth and go around to the front of the window, where he greets me with the same smile 600 other women have each seen at least once this year. Before I turn to the stairwell I ask him if he’s got any plans for the future beyond this.

No, he says, unless maybe Halle Berry comes to town and he sweeps her off her feet. We both laugh, and then he gets serious.

“Nah, I don’t have any plans beyond this. I don’t want to,” he tells me. “Honestly, this is the best job I’ve ever had. It makes me happy. This smile here — with what teeth I got left — it’s genuine.”