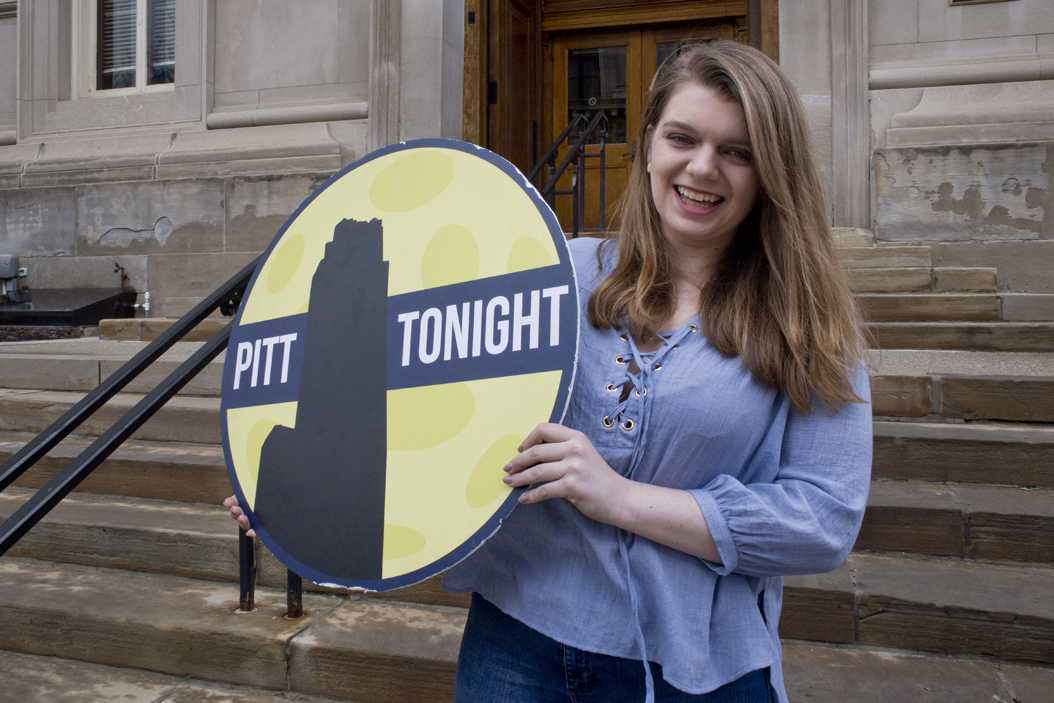 As the sole woman in Pitt Tonight’s trio of head writers, Dwyer was slotted to kick off the “Pitt Tonight” Women’s Empowerment Week episode, which aired mid-March, with a few jokes.

“What's a woman doing up here?” she jokes to the nearly full auditorium in Alumni hall, which begins to quiet as she warms the crowd up. “It’s Women’s Empowerment Week, so they were like, ‘Ossia, take off your apron, dust off your typewriter and get up there.’”

As she performs, she paces across the stage, her tone dry and her volume neutral — in a voice she jokingly compares to a “stoned Strawberry Shortcake.” Despite her low-key energy, the audience pays complete attention, laughing as Dwyer jokes about being a “lady.” She’s dressed casually in jeans and a light blue blouse with a hint of a smirk always playing on her lips. 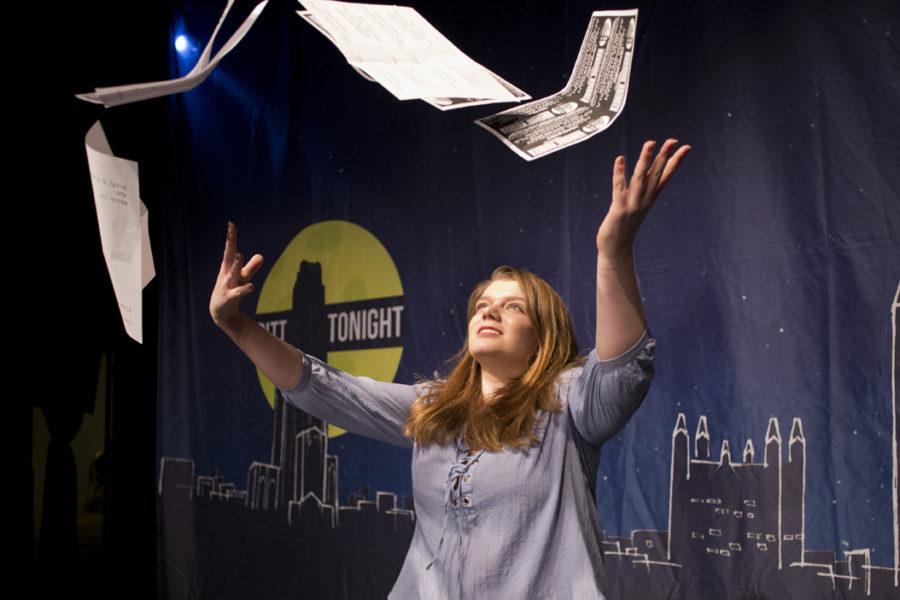 As part of her routine, she gives us a vocabulary lesson inspired by her small Vermont hometown. We learn that water fountains are called “bubblers,” a soft-serve ice cream cone is called a “creamie” and that Dwyer’s sheltered childhood didn’t prepare her for the fallout of saying “creamie” in front of her college peers in Pittsburgh.

The senior chemical engineering major is part of a recently developed and burgeoning comedy scene at Pitt, bolstered by weekly “collegiates and comedians” stand-up shows in Nordy’s Place and the newly formed late night show “Pitt Tonight.” You’ll find her each week at both of these events — a staple of Pitt comedy who’s been able to find her voice in a very short period of time.

Growing up in a small town in Vermont where tourists outnumber townies a la “Dirty Dancing,” opportunities for stand-up were scarce — “I grew up pretty isolated from everything,” Dwyer said. But she's certain that rural lifestyle, plus her mother’s British roots, had a lasting effect on her comic style.

“My mom is British, my dad is American, so … we were like the British people in a town of 500.” This British humor — which Dwyer describes as “gross” — offered a beautiful alternative to the over-exposed, prototypical New York comedian, introducing Dwyer to more unorthodox methods of comedy early on.

Through her work on the show, she’s became more comfortable performing her own material.

“I don’t think I’d be doing stand-up if Jesse hadn’t created ‘Pitt Tonight,’” Dwyer said, adding that she’s generally fairly shy.  “I’ve always liked comedy, but I didn’t realize you could still do it even if you aren’t the most outgoing person ... You can be a little quirky and quiet.”

Much of Dwyer’s humor is self-deprecating — she’s often making jokes about her style or “weird person name,” pronounced “oh-sha.”

“I always try to get the audience to feel bad for me for most of it, then do something that shows I’m also kind of a bad person,” she said, deadpan. “So you get both sides of it.”

In a November 2016 skit that she both wrote and performed called “Vote or Vomit,” Dwyer invited Councilperson Dan Gilman to participate in a quiz game based on her more shameful moments.

“[Gilman] had to guess if a place in Oakland was somewhere I had vomited before or if it was somewhere you could vote,” Dwyer said with a laugh.

Jokes about bodily functions were once, admittedly, the bread-and-butter of a male-dominated field. Increasingly, though, women comedians have made progress in the industry.

Still, of the 11 current sketch comedy shows listed on IMDb — including “Saturday Night Live,” “The Daily Show” and “Last Week Tonight” — only two have a staff of 50 percent female writers, according to a breakdown from BitchMedia. Those two — “Inside Amy Schumer” and “Broad City” — are both shows with female leads.

“I think it’s owed a lot to ladies who, 20 and 30 years ago, really had to undergo the worst things ever. It’s still difficult for women. I’m not always seen as a comic, I’m a female comic,” Dwyer said. “You always have the thing where you’re like, ‘Was I booked because I’m funny, or was I booked because there was no other woman on the show?’”

Though Dwyer cites Liza Treyger as a personal source of inspiration, she doesn’t dote on feminism specifically in her comedy —  “You can stand up for women, but you can also do whatever you want,” she said about her ability to intertwine empowerment with grit.

Dwyer’s also a female engineer — another field dominated by men.  After being reminded numerous times that engineering was typically “for boys,” Dwyer began laughing it off. “I know,” she said. “I have eyes, I can see what classrooms look like.”

Her stand-up is honest — somehow innocent even when it gets explicit. In one of her favorite routines, Dwyer jokes about how her ideal partner would be a hand. 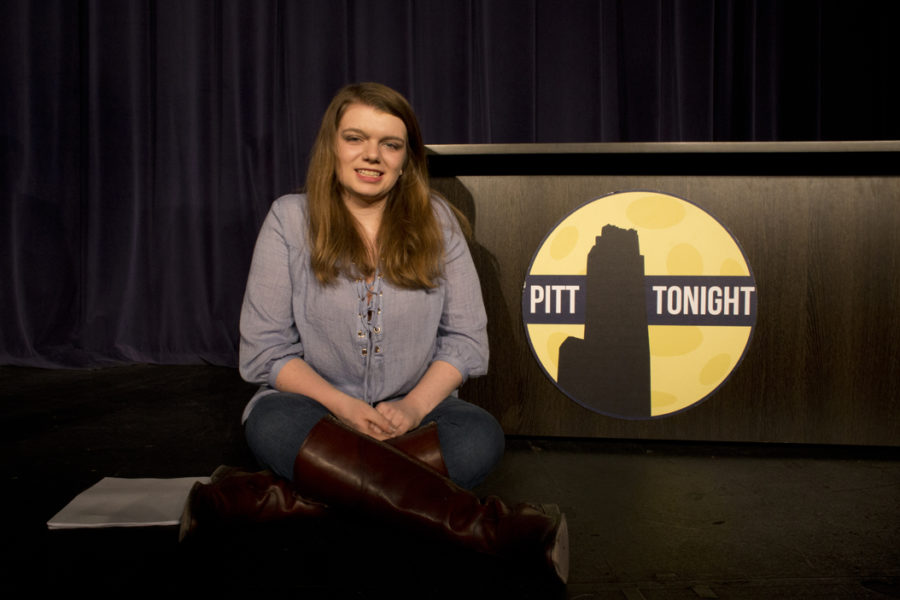 “I didn’t realize until I was doing it for like a month and someone thought it was a sexual thing. I was like, ‘Oh, no, people are getting the wrong impression,’” she said. “The whole thing is, I don’t want to talk to anyone, but I want the touch of a human, and then it kind of evolves to me yelling about how a hand isn’t like this guy I used to date. So it’s ridiculous and makes very little sense, but people like when you yell, too.”

Marchi, who considers Dwyer to be one of his oldest college friends, remembers breaking off from the rest of their friends early in college to have discussions about comedy. He said it’s Dwyer’s thing — and part of her charm — to take pictures at outings and show them to no one. She stockpiles the photos and tweets them at her friends on their birthdays, making sure to include the most unflattering snapshots from forgotten weekends.

“It’s enough to make you groan,” he said. Adding that as a comedian, “she very much knows who she is, she has a very clear, distinct voice.”

Dwyer sees herself doing comedy for the rest of her life, maintaining the casual persona she’s developed — which isn’t really a persona at all, it’s just her, naturally.

“I don’t think I could just stop,” Dwyer said. “I pretty much just tell the truth when I get up there, so everything is stuff that’s just happened to me that I think is funny. And if I time it right, sometimes other people think it’s funny.”