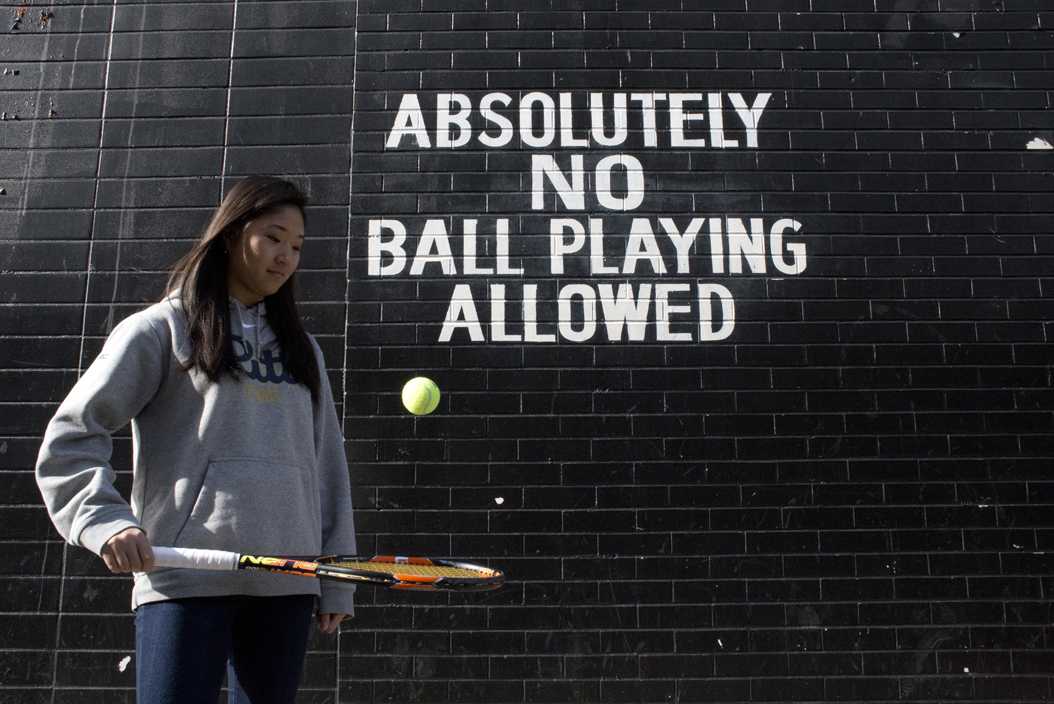 Natsumi Okamoto first left her home in the urban heart of Tokyo at 14 years old.

Passport and tennis racquets in tow, she boarded a plane to travel 6,467 miles to Barcelona, Spain, leaving behind her family, friends and way of life to pursue an atypical passion: tennis.

“In Japan, it’s really hard to find tennis courts. It’s kind of unique to play tennis there,” Okamoto said. “But when I moved to Spain, there were tennis courts everywhere, the environments were so different. And it was, really, one of the best places for me to train.”

It’s true: tennis culture in Japan is at a low, according to the Japanese Tennis Association. In 2012, only 1.2 percent of citizens reported that they played at least twice a month. Training and competition spaces have also been on a steady decline, with the amount of Japanese tennis court facilities decreasing by one-third from 1996 to 2008. Experts attribute this decline to young people’s lack of interest in organized tennis — most only want to play casually.

So how did she  get involved in such an unpopular sport? At 10 years old, she picked up a ‘70s-era comic book called “Aim for the Ace!”, featuring a spunky, tennis-playing main character named Hiromi Oka. 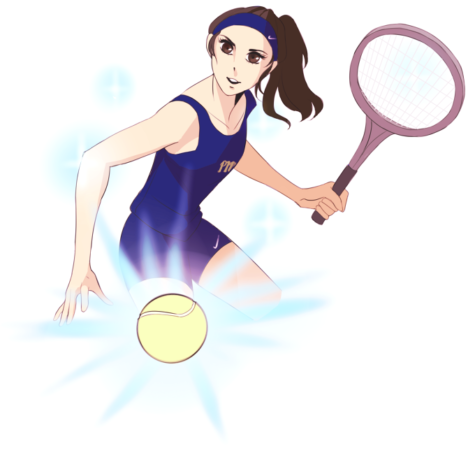 The fictional girl, with a mass of wavy brown hair, glittering eyes and impossibly long legs, inspired Okamoto. Oka sports a cropped, sparkling white tennis skirt and wears a red ribbon in her hair. In the graphic novel, Oka battles mental weakness, relying on her family and friends for support she grows from a budding tennis novice to the best in the world.

Okamoto herself — described as soft-spoken by her peers — went from thumbing through that comic book in the fourth grade to playing on a Division I college tennis team.

“I just told my mom I wanted to play tennis,” Okamoto said. “I still like my decision. Even when I go home ... I am still happy that I am here.”

During her first year at Pitt, she finished the season 7-7 overall in singles and 5-18 in doubles, measuring up to members of her team who had been playing at a collegiate level longer.

Around campus, she typically sports comfortable athletic clothing, black hair falling at her shoulders, sometimes damp from a post-workout shower. She’s humble and unassuming, naturally, but when she steps on the court she becomes fierce — full Hiromi Oka mode.

Her ponytail swings behind her as she smacks the ball across the net — backhand, forehand, flat serves and slices, emulating the charisma and skill of her initial comic inspiration.

Throughout her high school career, where she played on a high-performing team, Okamoto compiled 46 double wins and 38 singles, an impressive feat. She’s also participated in numerous international competitions hosted by groups such as the International Tennis Federation, snagging three overall wins at global tournaments — two in doubles and one in singles. Even worldwide, Okamoto is an intense competitor.

She’s traveled from the high-altitude plains of Kenya, to the bustling cities of India, to the sandy beaches of Fiji, where in 2014 she wrapped up her high school career with a spot in the semi-finals of the Oceania Open Junior Championships. In total, she estimates she’s journeyed to roughly 25 countries. Very few of these trips were for fun — some were for school, but most were for tennis matches, tournaments and training. 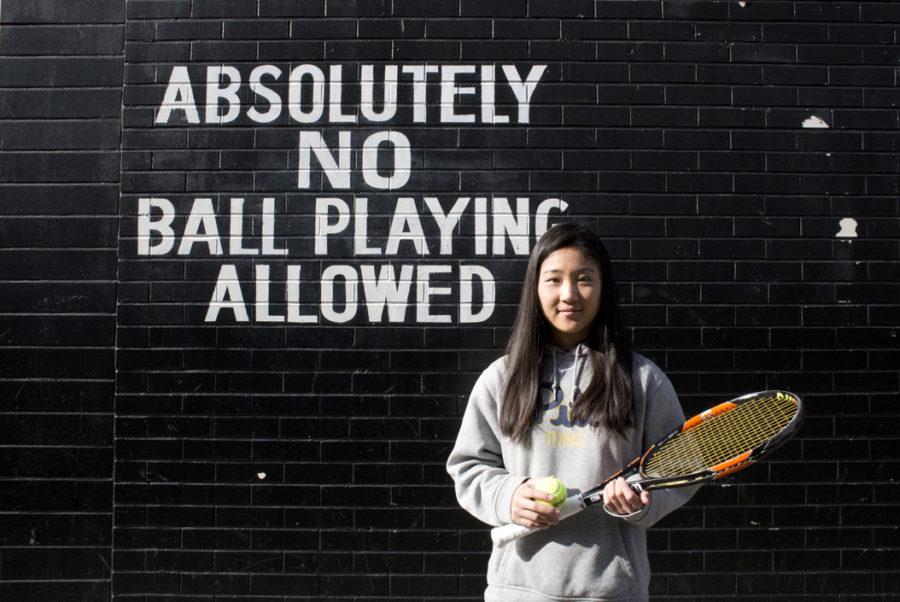 “I always had my racquets with me,” Okamoto said, adding that in Venezuela, she gained an overall doubles tournament win and experienced South American street life.

“It was a really cool experience. I saw a lot of police, and I think it was at a time when it was really dangerous,” Okamoto said. “I just really like to see all the different cultures. That’s one of the main reasons I love traveling.”

At the ES International School in Barcelona, Okamoto was one of only a few girls in her class. She mostly kept to herself, according to her former science teacher and mentor Daniel Green.

When she came to Spain in 10th grade and spoke neither English nor Spanish, she tried her best to acclimate, he said.

In order to learn the language her peers spoke, she spent time translating full paragraphs of books so she could read with the other students.

“She is an extremely hard worker, very dedicated,” Green said. “She learned English on top of six 45-minute classes and four hours of tennis practice a day ...That first semester was hard for her.”

Okamoto is now a sophomore global management major and a Spanish minor — she said her love for travel and time spent in Barcelona inspired her decision to pursue the language.

While deciding on a university, Okamoto didn’t want to choose between the court and the classroom — two places she performs exceptionally well. She chose Pitt because of its focus on both athletics and academics.

Although Pittsburgh is more than 6,000 miles away from her beginnings in Japan, Okamoto says in general, she doesn’t get homesick. She finds solace in her best friends Clara Lucas, who is from Spain, and Gabriela Rezende, who is from Brazil — also members of the tennis team who have come abroad to pursue the sport.

“We have a special connection because we’re all international,” Rezende said. “We’re going through the same process.” 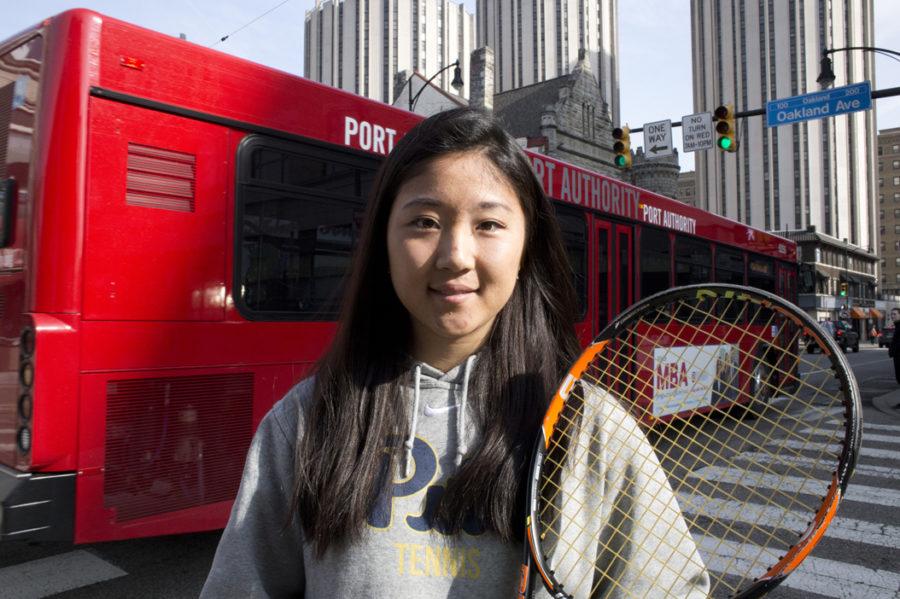 In the little free time they have between workouts, practices and traveling for matches, they do what most Pitt students do together: hang out in the library to study, visit the South Side to see movies and feast at local restaurants.

“Everyone, for me, is really like family,” Okamoto said.

Her parents visit America about twice a year. In between visits, they talk on the phone or use Skype to communicate as much as Okamoto’s rigorous schedule allows. Like Oka, who relied on a support system to balance out her mental process with the physical demands of being an athlete, Okamoto’s family and tennis team at Pitt has helped her manage any semblance of longing for Japan.

She isn’t sure about post-grad plans, but would like to put her business degree to use in America or abroad after graduation.

Whatever she decides to do, she’ll probably look for a challenge.

“For me, competing is life,” she said.