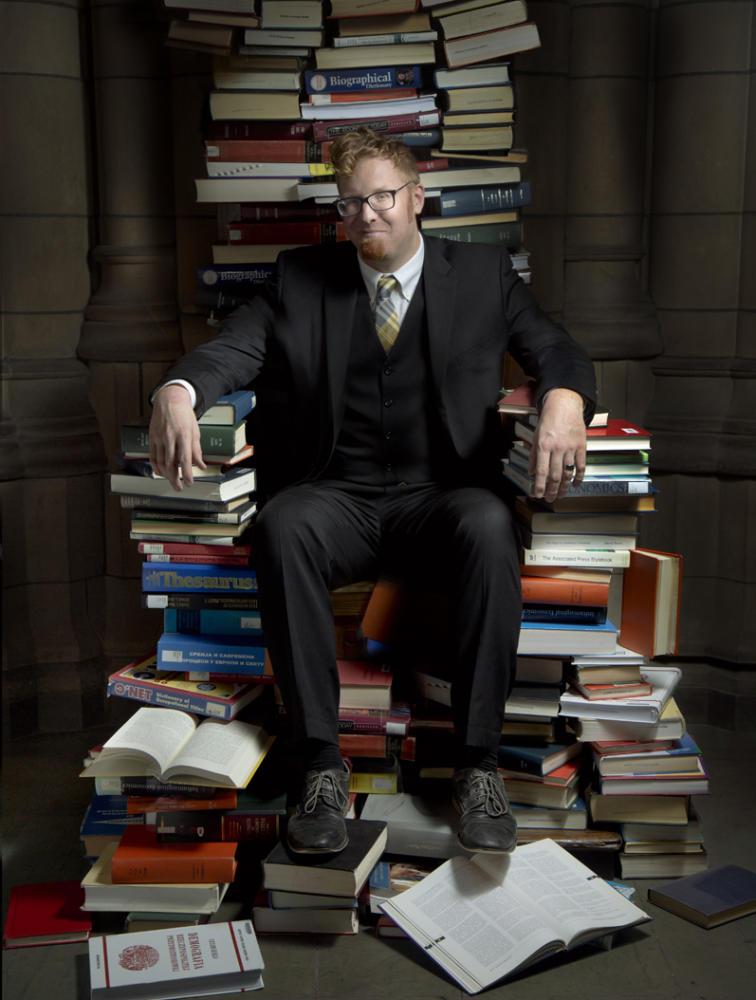 When you walk into Andrew Lotz’s office on the fourth floor of Wesley W. Posvar Hall, you’ll first notice the golden Hufflepuff banner hanging from his ceiling.

Or, maybe your eyes will be drawn to the two-inch by two-inch paintings of famous world dictators, or the bookshelf stocked end to end with graphic novels.

The most significant relic in the room, however, is easier to miss: a slightly worn copy of George R. R. Martin’s “A Game of Thrones.” The novel sparked not only HBO’s most-watched series but one of Pitt’s most popular political science courses, which Lotz created and teaches himself.

Compared to his rather bland office in Thackeray Hall, where Lotz works as assistant dean of the Dietrich School of Arts and Sciences, the Posvar room seems to be the place where the political science professor can let his mind explode all over the walls.

Tall and broad-shouldered, Lotz — a self-defined nerd with a penchant for Judge Dredd comics, pulp fiction mysteries and “The Walking Dead” graphic novels — sits at his desk twirling a tuft of red hair. When he’s holding office hours as assistant dean, he dons a black suit accentuated by a pair of bright red Converse sneakers.

A perpetual grin and hearty laugh make it clear that Lotz’s office hours are less a chore than an expression of genuine interest in his students and his job, which allows him to connect pop culture to politics — a passion that has guided his academic career and buoyed him through several hardships.

And hardships hit him full force in 2009. Right in the middle of work on his dissertation, Lotz agreed to get a divorce and was diagnosed with cancer all in the span of one week.

“It [was] the most stressful possible things in the world,” he said.

His marriage just wasn’t working, and the relationship was impeding on his progress in school. At the same time, a red patch started to swell on his right cheek, and he wondered if something was wrong.

“My ex had done all of these insane — she had these crazy ideas,” he said. “At one point, she was convinced...like there’s some real disease that’s vampirism.”

One day, while meeting friends at Emiliano’s Mexican Restaurant & Bar on the South Side, Lotz received a call from his doctor, who confirmed that he was not, in fact, a vampire. He was suffering from cutaneous T-cell lymphoma, a rare form of blood cancer that affects the skin.

“I thought I was going to die,” he said, laughing as he turned the memory on its head. “I plan on being around for a long time — because I’m stubborn.”

Lotz powered through early cancer treatments to complete his dissertation, though getting used to living with the disease was not easy.

CTCL is a chronic disease that primarily affects the skin and makes up about 15 percent of non-Hodgkin’s lymphoma diagnoses in the United States. The cancer occurs when white blood cells multiply so rapidly that they form tumors. While it’s typically not dangerous on its own, CTCL poses the risk of spreading to other organs.

Treatment for CTCL can range from skin-based therapies, such as gels, to more intense options including light therapy and radiation.

The condition is typically found in adults between the ages of 50 and 60, so Lotz — who is now only 38 — remembers his first meeting with a CTCL support group. Everyone in the room was older than him.

“I just felt out of place, and it was just weird. You’re stuck thinking like, ‘What am I? What happened? Why this?’” he said.

Lotz’s most useful strategy for getting through frequent hospital trips and new treatment plans was exactly what you’d expect from the ardent academic: He started carrying a book with him.

He dug into some old reading material to find new inspiration. In grad school, Lotz discovered Elizabeth Cady Stanton’s essay “The Solitude of Self,” which he describes as the “positive nihilism” of a dying, alienated woman. “You have to own your life. Why live someone else’s life?” Lotz concluded as a result of Stanton’s writing.

Behind his Posvar desk on a sunny Friday afternoon, Lotz is propelled by a jovial energy that seems out of place as he recalls adjusting to life with cancer.

He throws out one of his best adages: “You live through every disease except the one you die to!”

A sense of humor is helpful considering that Lotz is frequently subjected to new treatments, including self-administered interferon shots — which contain a naturally occurring protein that aids the immune system — and constant blood work.

Though he says his youth and build make him strong enough to handle the treatments, they have caused him extreme fatigue while teaching. At points, he’s had to hold on to something in the classroom for stability.

“I had to tell [my classes] ... if I’m ever down, it’s not for any lack of enthusiasm for you, it’s where I’m at,” he said. Classes help him handle the side effects, though: “I can disappear up here,” he said, tapping his forehead.

Lotz’s capacity for intellectual escapism was fostered at a young age.

Growing up in a right-leaning, politically-vocal household in Sioux City, Iowa, his political awakening came in the seventh and eighth grade, years that saw the fall of the Berlin Wall and the first U.S. war in Iraq.

As an undergraduate at Hope College in Michigan, Lotz created his own English literature major in utopian and dystopian novels.

After graduation, he spent a year unloading and loading supply trucks at a Save-A-Lot grocery store in Michigan. Lotz landed at Pitt as a graduate student in political science, his second undergraduate major and has been here ever since.

Given that he teaches about some of history’s most oppressive regimes — Nazi Germany and Stalinist Russia, to name two — Lotz confidently believes in the human ability to adjust to terrible situations. It’s why when people say they don’t know what they would do in his position, he replies, “You’d do just fine.”

“I think that’s the thing you learn about cancer or any serious disease,” he said. “We get by. We’re amazing creatures.”

Lotz seems to be doing “just fine” himself. In addition to his positions as a professor, adviser and assistant dean, he exercises, writes under a pen name for a gaming website, attends roller derbies and is filming a silent movie — all part of his “live big” philosophy.

The only evidence of his ongoing treatment appears in dark purple ovals on his forearms where medicine dyes his skin in hairless patches. He will live with the disease for the foreseeable future, so while it hasn’t become easier, he’s gotten better at dealing with it.

He lets out a big laugh.