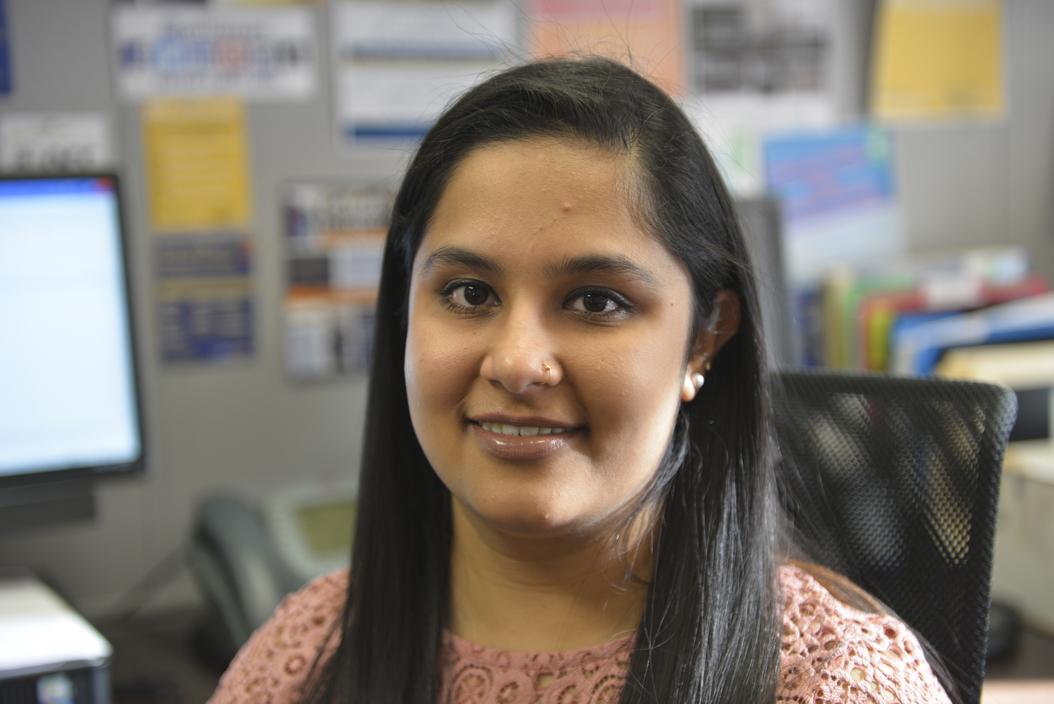 When Ayushi Dwivedi bought staples at Rite Aid during her first year at Pitt, she was surprised to learn they didn’t fit inside the stapler she brought from home.

Such a simple inconvenience, but a sign of all the little, unexpected differences that would combine to make the Indian international student’s first year at Pitt an adventure in unfamiliarity.

“When I come here, it’s a whole different planet,” she said. “[It’s] almost like sitting in a rocket ship and flying somewhere else.”

Despite the liveliness of Bangalore — her home city and the capital of India’s tech industry — Dwivedi led a studious childhood, spending her free time driving through the countryside with her family and attending cricket matches. Unlike her friends, she wasn’t fascinated with interested in Western culture, instead listening to ‘60s and ‘70s Bollywood hits and watching Bollywood films for entertainment.

So when she stepped off the 30-hour plane ride for her first-year orientation at Pitt, she faced more than just the transition from high school to college: She would be eating food she never encountered in India, going to football games instead of rugby matches and living nine-and-a-half hours ahead of her family.

“In my head, it wasn’t like ‘Oh, I’m going to America or some other land.’ I’m going to college because that’s the next logical step in my education, and so is everybody else around me,’” she said. “I had no idea what I was getting myself into.” 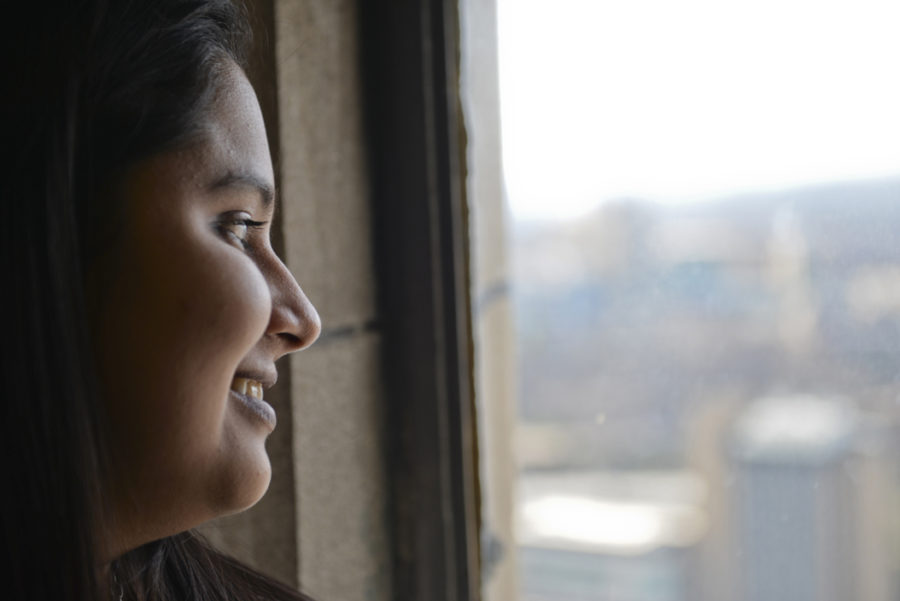 She chose Pitt for its urban environment, top-ranked biology and neuroscience departments and efforts to promote inclusivity and diversity while nurturing international talent.

After tackling the initial surprises life in the States had to offer, including adjusting to cycling on the “wrong” side of the road and making “nice to meet you” — a colloquialism rarely heard in Indian conversation — a part of her muscle memory, Dwivedi adjusted to life as an American college student.

“I think the reason that I’m still here after four years and didn’t freak out and go home is probably because I came in with zero expectations and zero assumptions,” Dwivedi said. “I always saw more what I had in common with other people than what differences I had.”

Four years later, the once tentative newcomer was nominated for Pitt’s Senior of the Year award.  She didn’t win — but her resume will probably survive regardless.

As vice president of the Pitt Arts student advisory board, Outside the Classroom Curriculum honorary brand ambassador, co-recruitment chair for the Career Development Society for Young Professionals and assistant scenic designer for Pitt Stages’ upcoming production of “Peter and the Starcatcher,” Dwivedi is taking full advantage of her time at Pitt.

“What I’m doing here, I could never do in India,” Dwivedi said. “The education system is very different. The whole point of coming here and investing so much money into my education was to hopefully settle down here.”

Whereas in India she would have had to choose a profession to pursue by age 17, she said she was drawn toward the American system of choosing a major and narrowing down her career path as college played out.

Dwivedi said she is fortunate that her father — whom she calls her best friend — was able to pay for her education. Her mother showed support by encouraging her to maintain elements of the way she was raised, such as maintaining her vegetarian diet and not falling victim to celebrity hero worship in America.

“Because the Indian family culture is a lot about constantly parenting your child, just letting go and letting your child grow is not a thing,” Dwivedi said. “My mom and dad are pretty much opposites in that regard, but it makes for a great balance, which is why me coming here was such a big deal.” 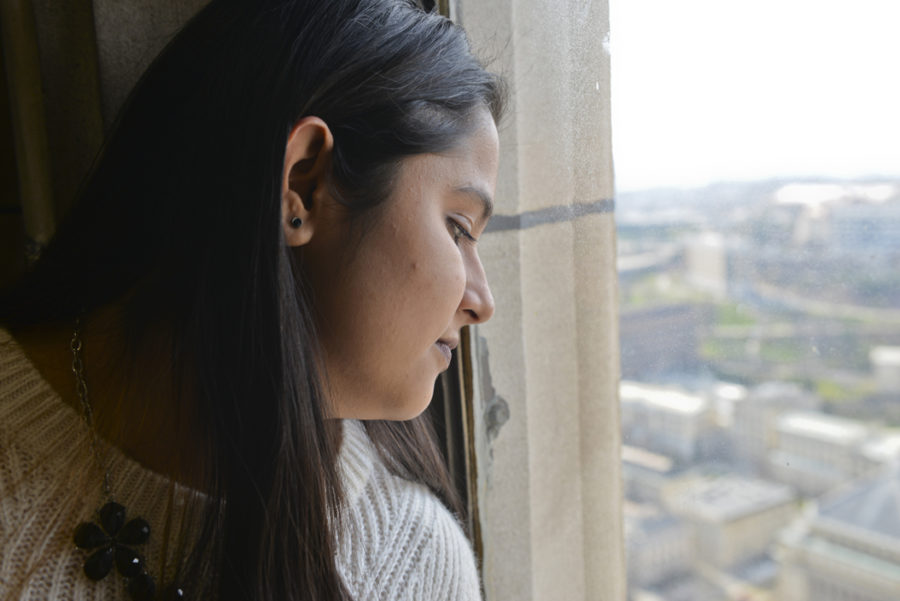 Although Dwivedi began eating chicken this year due to nutritional needs, she has upheld her mother’s other advice. In her four years on campus, she has only been to one concert, featuring University of Pennsylvania’s Penn Masala — a singing group consisting of American-born Indians that performs a capella mashups of American and Indian music.

“Even today, my playlist is pretty much all Bollywood songs,” Dwivedi said.

Her taste in music was one of the cultural differences between her and her American floormates as a first-year student, a gap that first-year resident assistant Galen Hughes helped her bridge by hosting floor activities and explaining the politics of living with a roommate and in a dorm.

Now, she holds similar positions to advise and guide students: She was a resident assistant for the Global Village Living Learning Community her sophomore year and a Freshman Programs teaching assistant for the past three fall semesters.

“Everything I do is centered around empowering fellow Pitt students, and so whatever I could do to enhance, that attracted me,” Dwivedi said.

She is set to graduate with a double degree in neuroscience and theater arts and plans to pursue her masters of science in health care policy and management at Carnegie Mellon University’s Heinz College.

Hit with the possibility of Trump’s administration interfering with Visa laws and the half-tuition scholarship she received from Pitt’s next-door neighbor, she finalized her CMU acceptance quickly.

“I know the city — I don’t need another culture shock, or city shock,” Dwivedi said. “I’m all set to be here for another two years.”

In a nod to Dean Kenyon Bonner’s “lift as you climb” philosophy, Dwivedi said this element of turning back and lending a helping hand to fellow Pitt students is at the “center of [her] whole resume at Pitt.”

“What Pitt has done for me and what they continue to do for me is so humbling,” she said. “I want to make sure I’m doing my part in whatever small way I can to give back to that.”