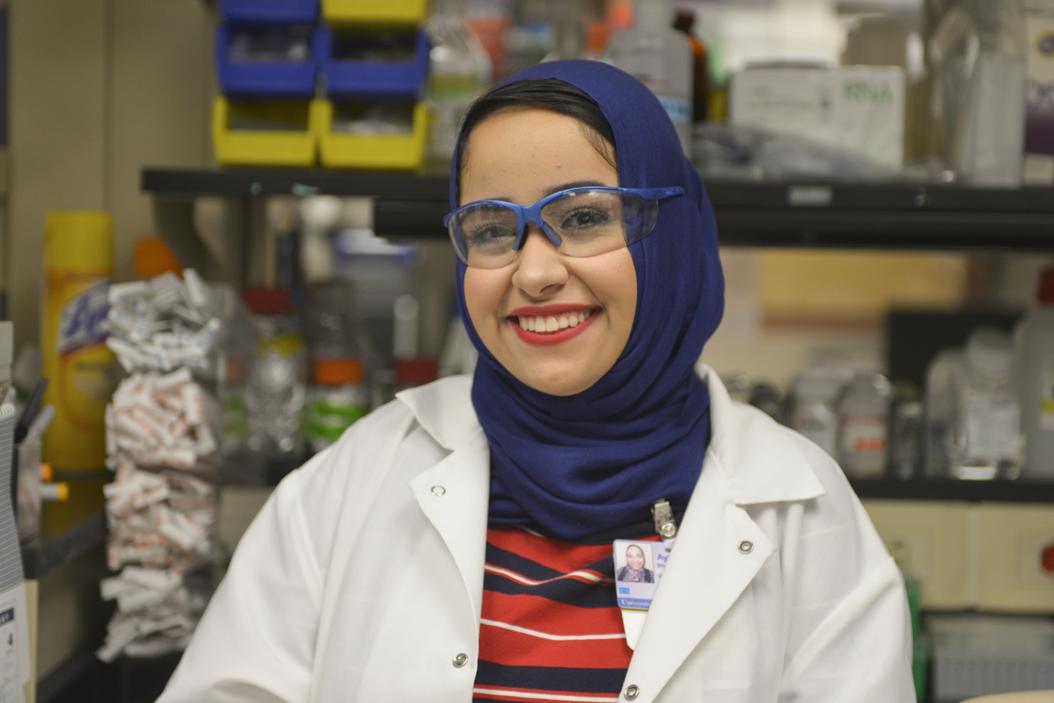 Shehata, now a sophomore at Pitt, remembers struggling with the ways her culture and religion — her family is Muslim and Egyptian-American — set her apart from the other kids in her class. She couldn’t understand why her family didn’t send Christmas cards like her classmates’ and she was embarrassed by her father’s thick accent when he visited her at school.

“When I was younger, I was almost ashamed of my religion and my culture, and the fact that I was so different from everyone else that I went to school with because I was in a predominantly white, privileged area,” Shehata said.

Growing up in Mount Laurel, New Jersey — a suburb of Philadelphia — she was trying to understand the depths of her differences while navigating the trials of American preteen girlhood.

“A big part of my childhood growing up was that battle of ‘Am I American? Am I Egyptian? Am I both?” She often asked herself. “Does my culture play a role in my day to day activities? How can I create that balance?’”

Middle school Shehata was so distraught at the idea of being an outcast that she would walk in the opposite direction if she saw a friend from school in public while she was wearing a hijab, coming from or going to the mosque. 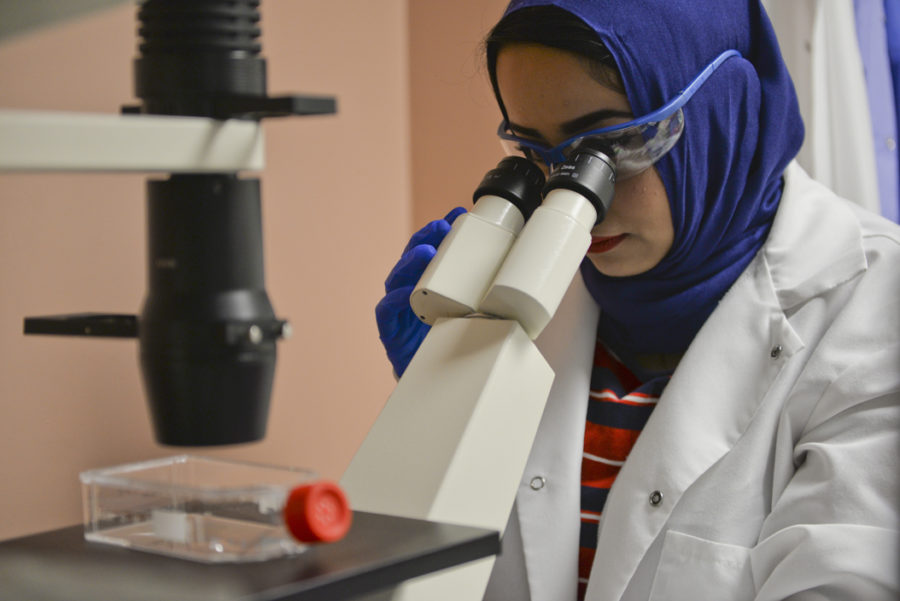 What she should have been grappling with were questions of her faith.

“Faith is something you have to convince yourself of,” Shehata said. “Otherwise, you’re just blindly believing and that’s not what our faith teaches. Our religion is all about asking questions and trying to figure out why the rulings are the way they are and convince yourself of that.”

When Shehata was in the sixth grade, her parents — both physicians — decided to send her to Noor-Ul-Iman, an Islamic school in central New Jersey. Shehata spent her time there learning the importance of investigating her religion for herself and researching the teachings of the Quran in order to understand Islam fully.

Now, the psychology and sociology major worries less about whether or not she stands out and focuses instead on the ways she can impact her community — through her faith and feminism.

Shehata is passionate about dispelling the myth that Islam is an inherently sexist religion. Growing up in a Muslim household, where empowering girls is a priority, her mother made sure she had the strength and tools to pursue her ambitions. One of her fondest childhood memories is singing along to Destiny’s Child songs in the car with her mother. 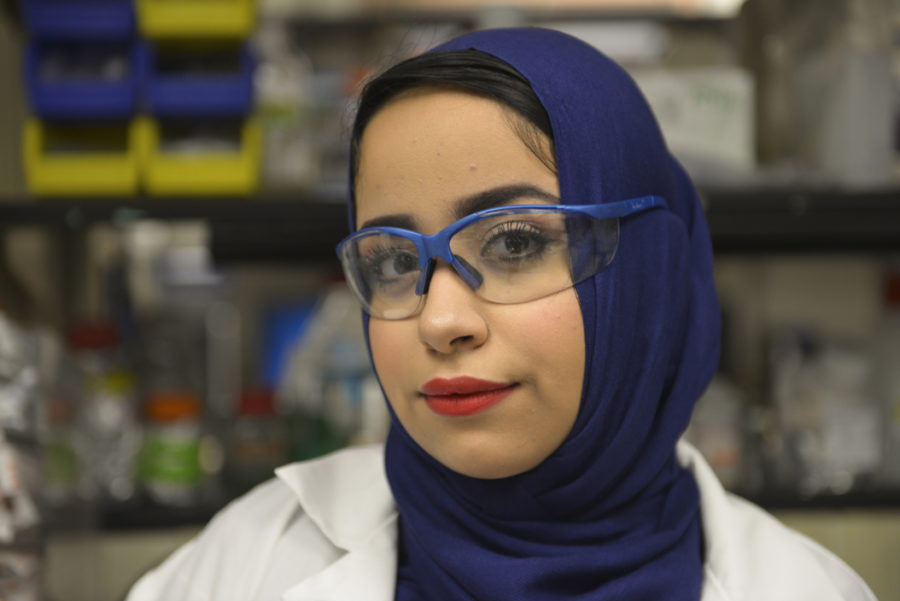 “The way we started it was we had each girl talk about what she was passionate about, and based on that she would create an event. So personally, my thing was intersectionality and feminism,” Shehata said.

So far, FEM has hosted events that deal with topics of women’s health, mental health and intersectionality. Shehata coordinated the Remarkable Women Intersectionality Panel, where she spoke to students, along with prominent women in Pittsburgh including Betty Cruz, who works closely with Mayor Bill Peduto to develop citywide initiatives, and Kathy Humphrey, Pitt senior vice chancellor.

Her desire to get involved with FEM stemmed from working as a mentor with the Strong Women, Strong Girls program, something she got involved with to pass on the strength and encouragement her mother instilled in her.

“If a girl feels that she can do something, she can,” Shehata said. “I don’t think I would have been the person that I am today, reaching out for opportunities and grabbing opportunities if I didn’t have that kind of backing from my mom.”

Shehata saw FEM as an opportunity to be a representative of her faith outside of her involvement with the Muslim Student Association — for which she is the female social chair — and to show that Islam supports strong women.

Excitedly adjusting the frames of her glasses, she points out that many of the great Islamic scholars were women, specifically referencing Aisha — one of the wives of the Prophet Muhammad — whom she characterizes as being “brave and feisty.” Aisha was not only a scholar who routinely questioned religious teachings, but also a soldier, fighting on the front lines during the early days of Islam.

It’s important to Shehata that those unfamiliar with Islam are comfortable asking questions since — for many people — she is the first Muslim person they actually know. She said that while she can tell many are afraid to say something wrong or offensive, they’re still approaching the subject with the right intentions. She listens to inquiries about Islam or her feminist ideals while nodding her tilted head in encouragement with her hands folded. In her responses, she speaks rapidly and emphatically, her hands keeping pace with her words exuding the passion and knowledge she has for the topic — pausing only to adjust her frames in concentration. 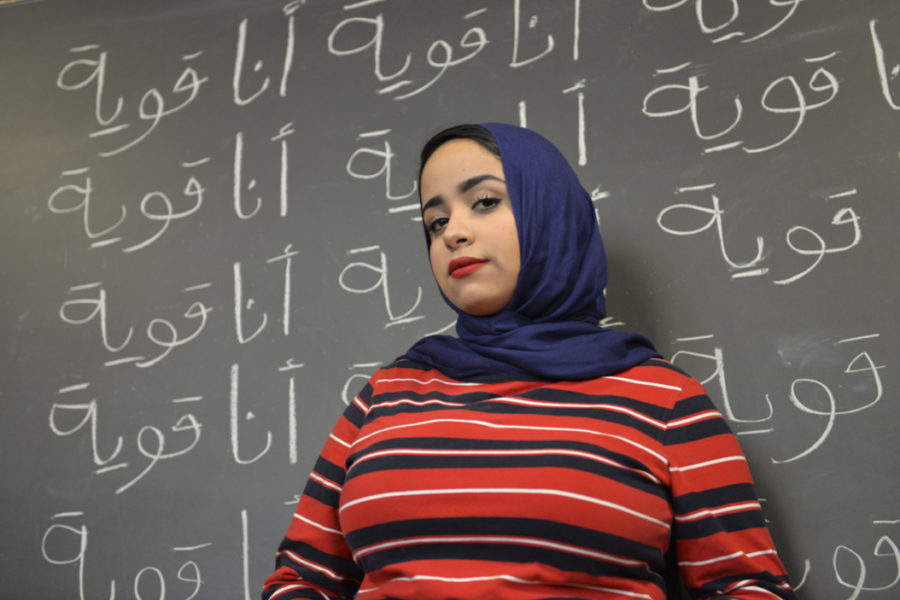 Shehata also organizes events for the MSA — some as small as a Halloween mixer for old and new members, and some as large as the candlelight vigil held in honor of the six men killed in the mosque shooting in Quebec earlier this year. As the volunteer coordinator for the Islamic Center of Pittsburgh’s Food Pantry, Shehata helps provide food and groceries to those in need in the greater Pittsburgh area.

“That’s a big part of Islam, wherever you go you have to leave a good impression and we see ourselves as representatives of the faith,” Shehata said. “That’s always been my mantra, that’s how my parents raised me, giving back to people who are in need.”

In early February, a woman walked into the Islamic Center who immediately caught Shehata’s eye. The volunteers were packing up the remaining groceries at the end of distribution while the woman tiptoed around the room visibly upset.

Shehata approached her to ask if she needed any help. With tears in her eyes, she explained how she was taking care of her granddaughter because her son was unable to and said she needed food. She admitted to being embarrassed having to come to the food pantry and ask.

Shehata walked the woman directly to the pantry and made her a box, going over the usual limits that the volunteers are allowed to give each person. Before taking her box, the woman gave Shehata a hug.

“I remember at the time I was considering taking a step back from the work just because I had a pretty big course load,” she said. “As soon as that woman gave me that hug I immediately regained that purpose that I needed.”

As a pre-med student, Shehata’s semesters are always demanding but she believes that it’s important to separate herself from the demands of University life.

“That’s what’s going to last, not the grades you are going to get, but the impact you are making directly is what’s most important and what we all sometimes overlook,” she said.

Her struggles no longer revolve around trying to fit in. Rather, Shehata, who plans to be a doctor, purposefully pushes her role as a proud Muslim woman in a STEM field.