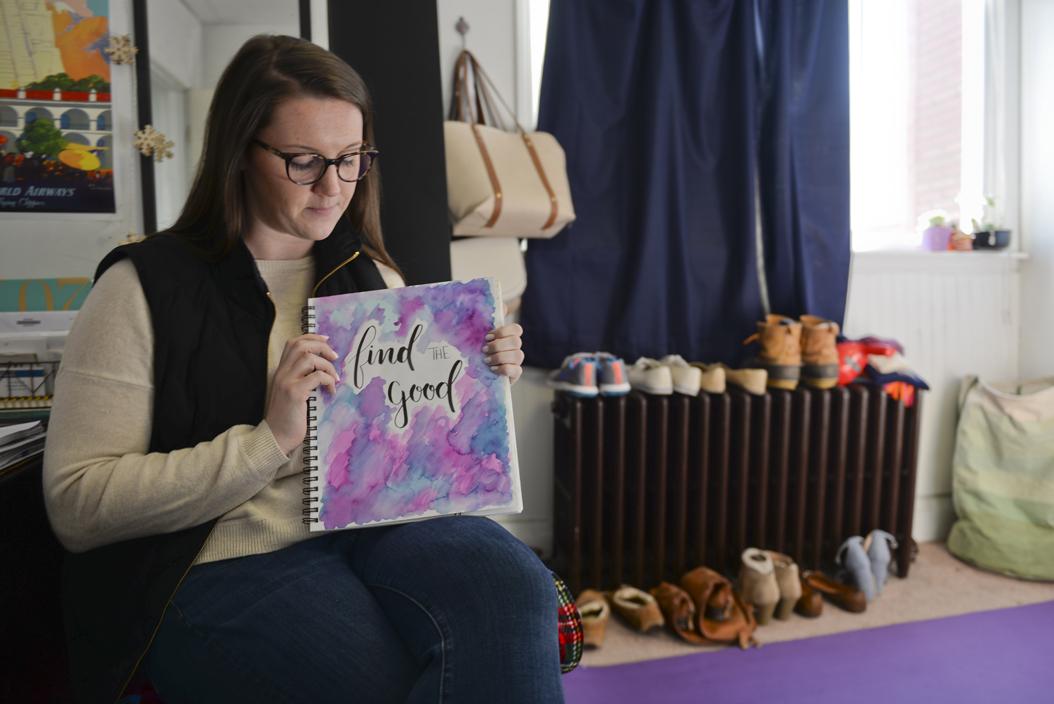 Like the “Sex and the City” character, Fernandes relays her life events via a Wordpress blog, sprinkling in bits of advice to an online community in which she’s both found and fostered support.

Unlike the fictional Bradshaw, Fernandes isn’t doling out relationship advice or delving into the intimate details of her sex life — she’s laying bare the struggles of a college student with a chronic illness.

One day in mid-January, she types: “I’m a firm believer that the universe deals us the exact cards that we need in order to grow, learn about ourselves and become better people.”

The senior applied developmental psychology major has Ulcerative Colitis, a bowel disease similar to Crohn’s that develops due to inflammation in the digestive tract.

Fernandes refers to the illness by way of an old allegory: the “mean teacher” — the stern kind you abhor in grade school. You suffer, but, eventually, you learn from the pain.

“In however many years, or however many months, I’m going to look back and say, ‘My illness … has taught me so much,’” she said, sitting at the desk in her room in late March, an essential oil diffuser releasing puffs of peppermint-scented air every few seconds. 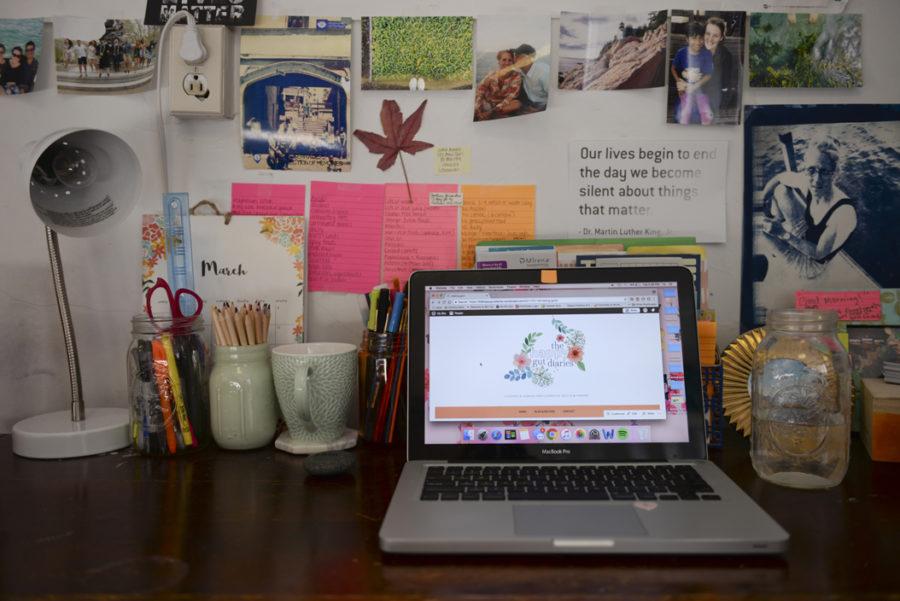 Fernandes, a Massachusetts native from outside of Boston, is chatty and bubbly. She comes across as incredibly put together — someone who’s not likely to roll into class late in sweatpants. And she is a productive person, methodically pre-packing lunches for her internship at the Education Law Center Downtown, keeping a meticulous planner, finding ways to venture out of the country whenever possible — to Guatemala, South Africa, Portugal.

In fact, it was her propensity for traveling that doctors believe led to her UC. While in Guatemala just before she began college, Fernandes was sick in the hospital for weeks, dehydrated and nauseous.

Her doctors think she might have picked up a toxic bacteria on that trip that festered in her gut and later led to UC. Whatever the cause — her one-time sickness abroad quickly turned into months of agony.

That’s when Fernandes really got to know her “mean teacher” in the fall of 2015, her junior year at Pitt. She couldn’t nail down which foods exactly were triggering the horrific abdominal pain, migraines and digestive issues she was experiencing daily. Often her ailments relegated her to bed when she should have been in class.

Fernandes spent much of her 2016 winter break — a Christmas vacation in Portugal, where she was visiting her father’s family — crying from the pain late into the night with her mother by her side.
“As much as I try to, like, keep my cool about everything there are times when I’ve been in a flare for like for two and a half months and I’m just so sick and so weak,” she said. “There’s a way that I’ve really felt betrayed by my own body.”

There’s a connection between the mind and the gut, she says. Her worries perpetuated her flares, which in turn left her reeling in anxiety.

Finally, her home-based gastroenterologist in Boston, whom she’d gone to see shortly before leaving for Portugal after months of testing, poking and prodding from other health professionals, called with a firm diagnosis.

Soon after, she and her mother met with a new doctor — the first had suggested there was nothing Fernandes could change about her diet to help her condition, so she stopping seeing him. This new physician started suggesting pharmaceutical treatments to reduce inflammation: steroids, immunosuppressant medications, infusions. Both Fernandes and her mother — who Fernandes refers to as “a total badass” — shook their heads.

“That was my moment to prove myself to the doctors,” she said, her eyes widening even months later as if she were trodding into battle against Western medicine. “I was like, give me one month and if I don’t succeed at getting better on my own … then I’ll do my infusions and injections.” 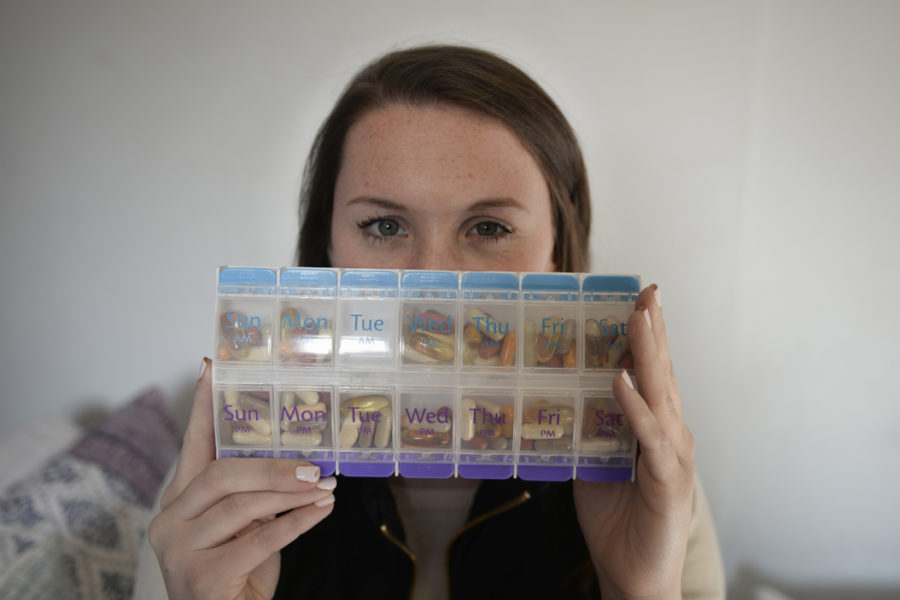 Desperate to avoid a life of IV bruises and doctors’ visits, Fernandes met with a holistic nutritionist — someone who specializes in healthy and organic food as close to natural, read: unprocessed, as possible. The nutritionist was baffled by the gastroenterologists’ answer, too. She set to work determining a diet that would balance out Fernandes’ life.

Today is a Tuesday afternoon in March, and Fernandes is having a “mini flare,” though she’s always prepared for a bigger one. She’s cleanly dressed, in a white long sleeve shirt with a puffy black vest over top, tapping her nails on the refrigerator door while she sifts through its contents.

Pushing her black glasses up her nose and flinging a tress of auburn hair behind her shoulder, Fernandes lays asparagus out on a tinfoil-swathed cookie sheet. She’ll pair it with baked chicken but nix the garlic mustard sauce she would typically drizzle on top.

Fernandes also offers these recipes on her blog, “the happy gut diaries,” and on her Instagram by the same name. She often can’t drink alcohol or caffeine  — a diet as good as a death sentence for many college students. But the community she’s found online has been essential in reducing feelings of isolation brought on by an illness that often means skipping out on social events like bar-hopping or grabbing lunch. 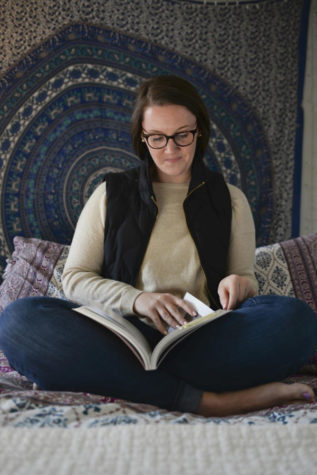 “When I go on Instagram or when I blog about something, I think I’m trying to reach people that are either in the beginning stages of what’s happening to them, or trying to help somebody else,” she said, recalling a time when she desperately searched the web for answers to questions no one around her could understand.

Right now, she’s emailing back and forth with a woman who’s just been diagnosed with a chronic illness: “My advice to her is to first of all take it day by day and also know that you’re not the only one going through this.”

Let’s call Fernandes an optimist, someone with a relentless faith in the idea that the universe wants her well.

Of course, she’s found people willing to push the universe along — she sees her holistic nutritionist when she needs support, visits a Shiatsu practitioner one to two times per month during a flare and still makes appointments with her naturopath doctor and gastroenterologist.

Her translucent blue pill box is stuffed with large, grainy yellow and brown supplements for every day of the week.

Fernandes is self-aware. She acknowledges the lifestyle she leads isn’t manageable for everyone, time- and money-wise. And, she’s quick to note, more traditional treatments do help others with a variety of illnesses, physical and mental. It just isn’t for her.

“I think I’m trying to just reach people and say, ‘This is my experience, everybody has a different experience, but this is mine,’” she said.

She’s even sought the advice of a psychic upon recommendation from her mother — “the family psychic,” she says, laughing.

Now, Fernandes paints inspirational quotes in watercolors, sticks motivational notes to her mirror, reads and rereads autoimmune wellness books — one of which contains a “manifesto” with 20 holistic principles to live by.

In mid-December, shortly after Fernandes had blogged with bad news about her worsening condition, she writes about a manifestation box she’s made, filled with affirmations about her health: “I believe I will get better. I believe I have control over my body … I choose to only visualize what I WANT my health to look like instead of worry about what it COULD look like.”

On her posts, her sign-offs vary. Sometimes, she keeps it simple: