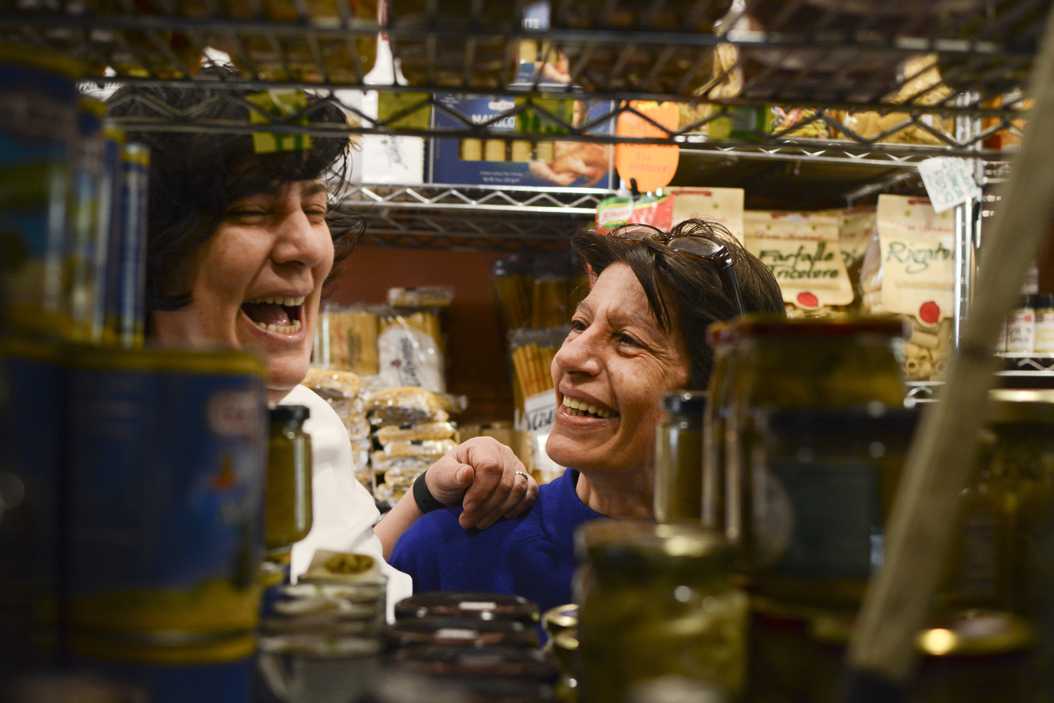 When a car crashed into Groceria Merante on a warm December day in 2015, the whole front of the store needed to be remodeled — but the only food item that suffered was a solitary tomato.

It’s certainly fitting for the daughters of a 1950s Italian immigrant who kept his seven children fed with the most standard of Italian foods: red sauce and pasta.

A few years later, the small shop — firmly rooted on the corner of Bates Street and McKee Place in Oakland — is back to normal, the squat storefront crowded with vibrant neon posters and vegetables stacked up behind the windows. The streets of Oakland are fairly empty on a warm Saturday morning in March. Only a few cars drive down the road, and barely any students walk the streets at 8 a.m.

But the inside of Groceria Merante is teeming with energy — a heartbeat in the center of Oakland. 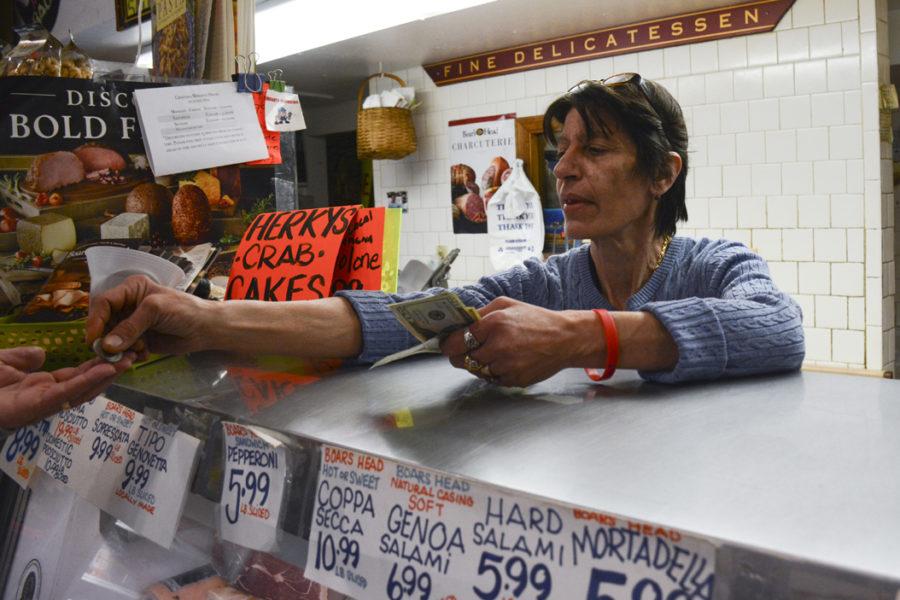 “I was just saying this on the way in: I love going to work on Saturday mornings,” Filomena, one of the two sisters who own the store, says. It shows. Filomena and her younger sister, Julie, are in lively spirits, their demeanors no different on an early weekend morning than on a Tuesday afternoon.

No uniforms are necessary in the shop. Julie and Filomena wear T-shirts and jeans, their distinctive Italian features — dark hair, tan skin — mirroring each other.

Behind the deli, Filomena can be in her “own little world.” Julie hangs out up front where she recommends sauces or cooking tips before to customers as they check out, but her speciality is vegetables  — a proclivity that inspired the nickname “the produce princess.” Salvatore, or Uncle Sal, sits outside on the stoop with his miniature dog, Dino.

Filomena, petite with short, untamed hair, wears reading glasses atop her head to keep the more disobedient strands off her face. A hearty laugh cuts her raspy voice as she responds to Julie’s interjections into the conversation.

“Oh yeah, I was Daddy’s favorite,” Julie chimes in about her six brothers and sisters as she squeezes past Filomena in the aisle.

“He was just worn down by [child] number five,” Filomena, the third-oldest in the family, replies.

There are no chairs, so customers lean against the glass of the deli waiting for their lunches. Not that there's any room for seating — shoppers squeeze by the refrigerators of fresh produce and antipasta and stand on tiptoes to reach shelves of sauces. 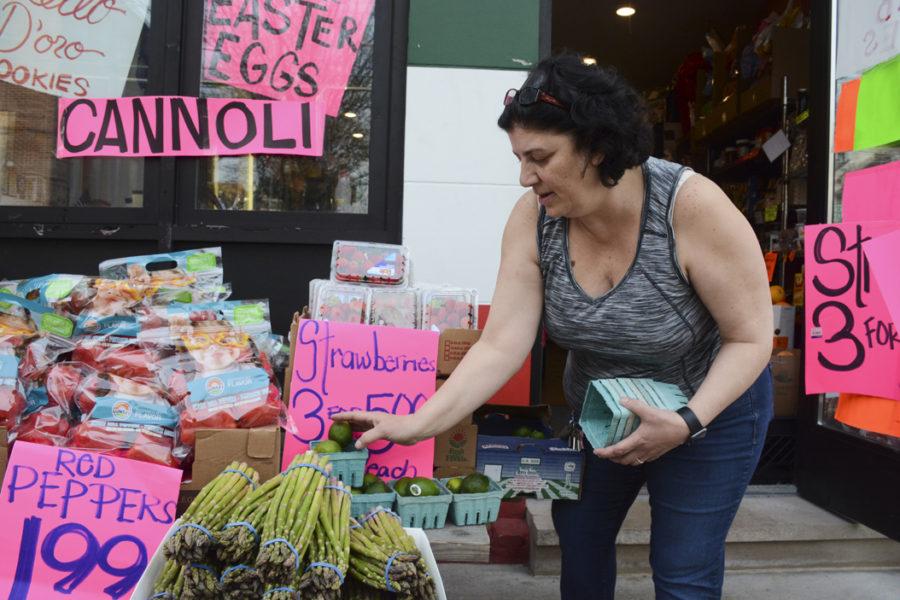 People flit by all around Filomena, perfectly comfortable planted in the middle of the rush. Construction workers stop in to grab coffee while some early-rising students grab Saturday morning groceries. A few others pop in to say hello to the sisters, kissing them on the cheek as if they’re related.

For the Merantes, everything in life is about family, community and their homeland in Calabria, Italy. The sisters first opened the store in 1979, but their history in the grocery business stretches back longer.

Their grandfather, Nonno Pasquale, began the grocery tradition in 1930s Oakland with a shop on Childs Street. Bouncing back and forth between his home in Petone, Italy, and Pittsburgh, Pasquale raised three boys: Italo, Salvatore and Antonio. Italo — Filomena and Julie’s dad — and Salvatore immigrated to Pittsburgh in the 1950s and used what they’d learned from their father to open up their own shop on Frazier Street, “Merante Brothers.”

The family was one ripple in a wave of Italian immigration to the city that began in the late 1800s. The U.S. Census recorded just shy of 800 Italian-born residents in Pennsylvania in 1870. By 1900, that number grew to more than 66,000 Italians living in the state. Pitt dedicated the Italian Nationality Room in 1949, marking the contributions the Italian community already made in Pittsburgh.

Oakland was filled with Italian families at the time, and the store was as much a centerpiece for the Merante children as it was for the neighborhood. Filomena said her father garnered so much respect between the ‘50s and ‘70s that their customer base spanned generations.

“He was always a very honest business worker,” she says. “He carried a lot a people when times were hard and they didn’t have very much money.”

Both the Merante parents, Italo and Philomena, have passed. But the family legacy continues: If you see a young man at the cashier or behind the deli counter, it’s likely to be one of Filomena’s or Julie’s sons or nephews.

“We don’t know if they’ll carry it on. Right now, we’ve got a good group. But who knows how long it’ll last...we’ll have to see,” Filomena says about the younger generation. Regardless, the family traditions will go on just the same.

Every Sunday night consists of big family get-togethers. The main event is, naturally, a dinner the whole family prepares. Depending on the day, the dining room of Filomena’s home — her mother’s old house in the suburbs of the South Hills, where most of the family now lives — is made up for close to 20 people, and the cooking begins Friday night. 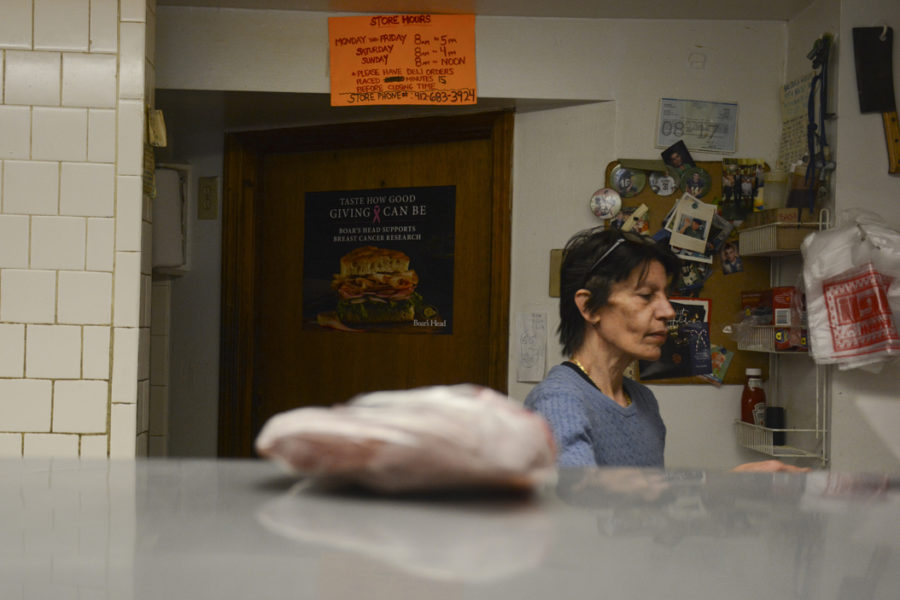 The family often makes trips back to Italy, visiting relatives and their father’s village whenever they get the chance. What Filomena loves most about the country is the relaxed way of life.

“Their style of life, they love to live,” she says with a warm smile. “They appreciate it. They sit down to eat, they don’t eat on the fly. A lot of big cities close for that lunch pocket from 12 to whenever. They value their time.”

Unfortunately, that lifestyle is a hard one to replicate in the States, according to Filomena.

Still, the dull ache of longing for another country is softened by the family’s bond right here in Oakland.

Pointing to an old Merante family cookbook, Filomena reads aloud a favorite adage of hers.

“La familiga e’la patria del cuore,” it says — “Your family is the homeland of your heart.”

The clan offers stability to the ever-transforming bustle of Oakland — its streets rife with college students at night, hosting raucous parties that the Merantes never minded while they lived here, the mornings filled with bleary-eyed young adults swiping coffee as they run late to class.

Oakland has changed over their lifetimes, the family admits, but they’ve welcomed the student population with the same warmth you might expect them to offer a visitor in their homes.

“She always gets teary-eyed during graduation. She’ll start crying,” Filomena says about her sister. “It’s nice to see you guys grow, just how we raised our kids.”