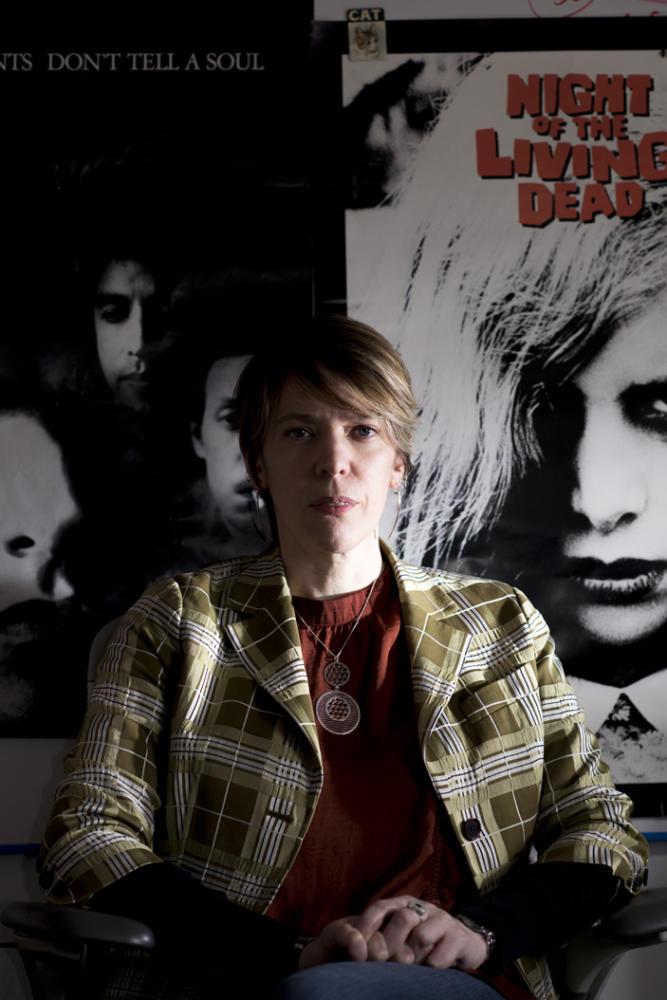 Here’s the exact moment a too-young Dana Och got hooked on horror films: She had found her way around her mother’s “no scary movies” rule while her family watched “The Exorcist” on TV.

“I was laying on a couch with my back to the film on television, and I watched it through a mirror,” Och said. “It was the most terrifying thing I’ve ever seen in my life.”

Now, with an office decked out like a mini Halloween store, a Ph.D. in literature and a film certificate, Och is dedicated to the terrifying and the obscure — right down to Irish cinema and postcolonial zombie comedies.

Sporting a dark blond pixie cut and blue jeans, Och exudes an aura more indie punk-rock performer than Ph.D. Sure, her office houses the obligatory stacks of books and papers you’d find in any professor’s workspace, but about 90 percent of the room is pop culture memorabilia. 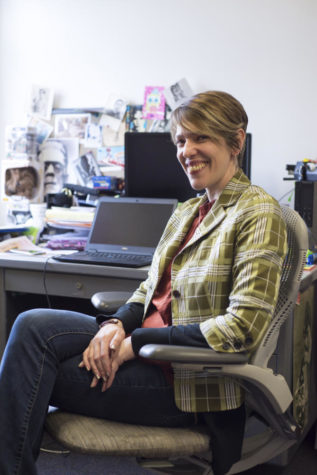 The walls are plastered with posters of classic horror flicks from “Frankenstein” to “Night of the Living Dead.” Toy zombies outfitted in Penguins and Steelers gear line the shelves. And her desk is littered with figurines, including one of her favorite movie characters, the Bride of Frankenstein — Och likes her because she never kills anyone and rocks a tall, bushy mass of white-streaked hair.

All of these different traits fuse into one personality — that of a vibrant and passionate professor with a knack for connecting with her students and a love for all things media.

“The field that I’m in, it fits me,” she says, mimicking the “floor is lava” game as she crouches on her rolling computer chair with her right leg tucked under her chin.

Her passions burgeoned in her childhood and adolescence, where her family’s tendency to gather around watching films like “The Exorcist” was typical.

Och’s parents divorced when she was two, and she moved with her mother from her childhood home in Rochester, Pennsylvania, to Owensboro, Kentucky. Och spent nearly all of her time with her mother’s side of the family, watching and acting out scenes from movies with her two older sisters and older brother, her mother, aunt, uncle, Na-Na and Pap-Pap.

Och’s sister Kerry, who is two years older, said her love of movies and horror comes from those late nights staying up with the family. The sisters would sneak downstairs to watch slashers while the rest of the family was asleep.

“In some ways, it made us closer,” Kerry said. “We would scare ourselves, so we would all huddle together. We used to freak ourselves out. We’d be playing outside, and as soon as it started to get dark out, our imaginations would run wild. We would think Freddy or Jason were in the woods, and they were going to come take us.”

Och spent her middle and high school years in Owensboro, where music took over as the dominant form of media in her life. She dove into the punk/indie scene, discovering bands like The Pixies and Violent Femmes, and played the clarinet in her school band until her senior year — before she quit because she hated the uniform.

Och enrolled at Pitt in 1992, where she would spend the next 25 years of her life.

Like many other Pitt students, she started out living in Sutherland Hall the first year it opened before venturing out into the apartments of South Oakland. As a sophomore, she moved to York Way — a little alleyway off Louisa Street between Atwood Street and Meyran Avenue — which is where she met her future husband, Chris Cannon.

“He lived next door to me and played in a band,” Och said. “That’s the most romantic story you’ve ever heard, right?”

The two have been together ever since, even though they’ve only been married for about five years. Och doesn’t keep track of their anniversaries, and when they got married, she kept her name. That way, she doesn’t have to scrap her perfectly-themed nickname: Doc Och.

Och started out as a biology and English literature major, originally intending to become a psychoanalyst. But by the time she finished with her undergrad degree, she knew she wanted to teach. She also knew she loved cinema, but didn’t know there was a way for her to do both.

When Och got to graduate school, though, she had to take a required film class for students pursuing a master’s degree in her field — after which she realized she was on the wrong track all along. So she switched to film and received her Ph.D. in literature with a certificate in film studies in 2006. 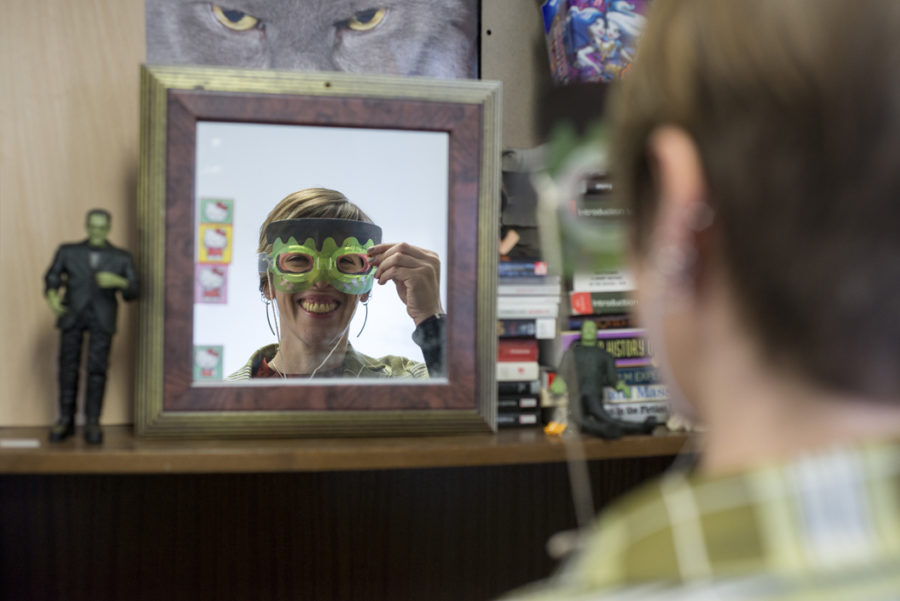 “I grew up watching movies all the time and watching television all the time, but I didn’t study them,” Och said. “Whenever I switched, it was the easiest thing I’ve ever done in my life because I was so well-versed in cinema and television that I knew a lot, even though I didn’t actually study film in undergrad.”

In Och’s 9 a.m. film comedy class, students aren’t scrolling through their phones or rubbing their eyes trying to stay awake.

As she strolls into the classroom at 8:55 and puts down her belongings, she notices one student has decided to take the seat closest to her desk despite numerous open seats at a more comfortable distance.

“I need to feel the knowledge,” the student replies.

Och obliges, making sure he and the rest of his classmates receive her undivided attention for the entirety of the nearly four-hour class period. She doesn’t even look away from the class to jot keywords down on the chalkboard — resulting in somewhat scribbly but still-legible material.

Och refers to her teaching as a “student-based learning style.” Rather than reading from a textbook or glossing over PowerPoint slides, she sparks discussion among her students. Maybe it’s the buried psychoanalyst in her, looking for ways to lead people to their own conclusions.

“My teaching is, rather than me telling everybody what to think, I like to flip it and have the students try and work through and figure out media and media landscapes themselves,” she said. “I always say, ‘I know what I think. I’m curious what you think,”

It’s not only students that learn from Och — it’s her colleagues as well. Och has worked closely with fellow film professor Ali Patterson since 2011 on numerous projects at Pitt. The two serve on the undergraduate curriculum committee where they help consider how Pitt classes are serving students.

Patterson said she still goes to Och for help when she’s struggling to connect with students on a certain topic or looking for new ways to engage them.

“If I have a class that hasn’t gone precisely the way I wanted it to go, I’ll talk it through with her. We’ll do kind of a post-mortem on a class, and she’ll provide feedback and insight,” Patterson said. “She’s really great at asking questions in ways that connect her with students and invite responses, and I think sometimes my questions can seem convoluted to students.”

The films and literature Och enjoys studying don’t usually pop up in academia, amid more conceptually traditional topics of study — Shakespeare, “Pride and Prejudice” and Alfred Hitchcock films, for instance — but that’s the way Och likes it: nontraditional.

“We a lot of times have the idea that philosophy and theory are these really difficult things that are only for the elite,” Och said. “I don’t believe that at all. I believe that we all should be thinking.”