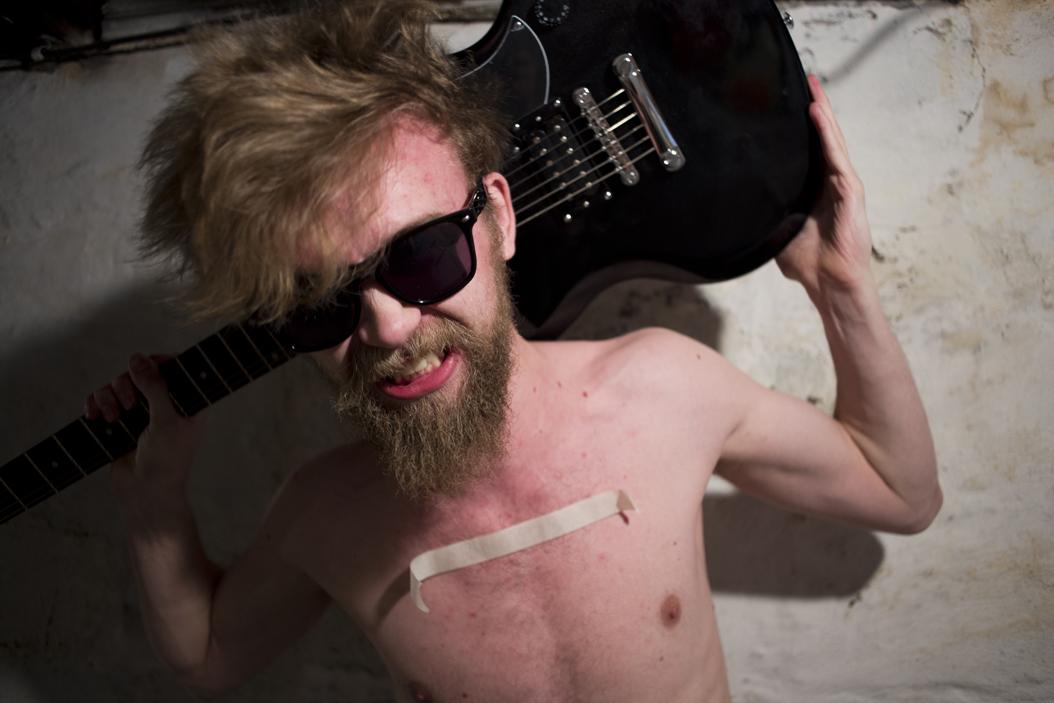 “There’s a track on [his new] album coming out about calling my mom, telling her I got mugged and I need money to buy candy bars — desperately,” the junior marketing major says with a grin as he walks down a snowy Fifth Avenue.

Stauber pauses before letting out an unruly laugh. He describes a love song he wrote later that same day dedicated to Verne Troyer — the actor famous for playing Mini-Me in the “Austin Powers” movies.

The 21-year-old creative whirlwind isn’t messing around about staying firmly outside the box. In fact, as he tackles music, movies and live performance, he seems to wear his distinctly scatterbrained process proudly on his sleeve.

“I take goofing off very seriously,” he said, in an abruptly dour tone.

Stauber’s idea of “goofing off” likely doesn’t mirror the procrastination tactics of other college students. On a typical Wednesday morning, the marketing major wakes up at 4 or 5 a.m. and starts playing music.

“And I would do that for probably about eight hours straight,” he added. “I get pretty obsessed.” 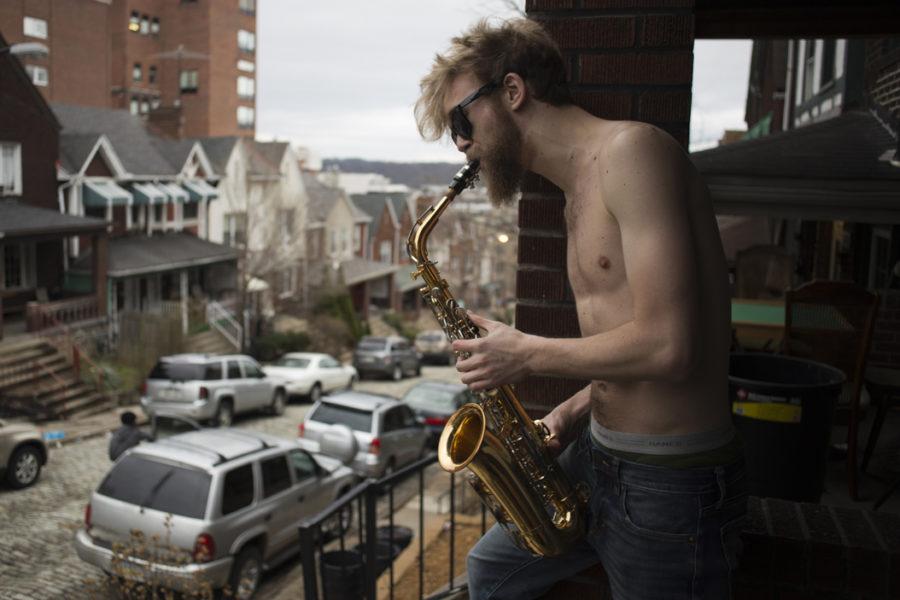 Three months of concentrating his creative powers — his bedroom strewn with sheets of lyrics, offhand doodles and musical notations — or meddling with an old keytar in the harshly-lit basement of his West Oakland house seem to be paying off.

Stauber released his third and most recent solo album “Pop Food” on March 25.

The album, available on Bandcamp, doesn’t restrict itself to any one specific style or feeling as it moves from lo-fi indie to synths with an almost 1980s aesthetic, electric guitar and twinkling melodic riffs sandwiched between snare. Instead, it seems to mirror the artist’s obsession with creating and his fondness for the weird. The result is simultaneously serious and playfully self-deprecating — digestible, but an obvious labor of love.

“I tried to make it as accessible as possible,” Stauber said. He dismissed his prior two records, which have a more distinctly raw sound, as overly-introverted attempts at finding an authentic creative outlet. Producing LPs is part of a musical obsession that stretches back to high school and before — and one in which his increasing confidence and uncanny personal style finds its roots.

Hailing from McKean, Pennsylvania — a tiny borough in Erie County — Stauber channeled his passion in high school through any and every creative venture he could find. He complemented his participation in school musicals and performances singing jazz with a band he and his friends formed called “Joose” that began playing in Erie’s rudimentary live music scene.

Stauber credits the music community there — particularly a venue called Basement Transmissions, where he’s performed more than 100 times — with shaping his personal and musical styles and setting his expectations for live music performance.

“Erie is one hell of a scene — actual dancing, conversation between songs,” Stauber said, adding that the transition from Erie’s more intimate atmosphere to the larger musical landscape in Pittsburgh was difficult at first.

After transferring from Pitt’s Bradford campus last year to Oakland, it took a while for Stauber and his new group project, a band called “Zaki,” to find a home in Pittsburgh’s music community. Stauber’s high-energy personality didn’t initially fit well with the more competitive, almost anonymous atmosphere that he said came with moving to a larger city.

“I like a jovial scene,” he said. “It was so quiet here at first, just ‘cause I didn’t know anybody.”

Starting with basement shows, Stauber and his bandmates — Pitt students David Pirozzi, Sean O’Connor and Stephen Kraus and recent graduate Jesse Descutner — chatted and charmed their way up to the ground floor in a matter of no time at all.

Last month, Zaki performed at the Mr. Roboto Project artspace in Bloomfield. The band is also set to open at the Brillobox later this month for Norwegian Arms, a freak folk group Stauber counts as one of his main inspirations from high school.

“All the boys in that band are, just, socialites,” Stauber said. “Being in a band is like the closest relationship to a group of people you can have — it’s practically dating.”

Dating isn’t too far off from the feeling Stauber and his bandmates give off in live performances  — which the junior musician claims should be largely about connecting with the people around you. Playing at an Ophelia Street basement show in March, the singer seemed just as interested in entertaining his bandmates as the audience. Looping the cord loosely around his neck, he handed off the microphone to Pirozzi to sing a verse before untangling himself and suddenly disappearing among the audience’s legs.

Without warning or explanation, he took off his sweater and shirt and stuck a long piece of tape across his chest in an act of mock solemnity. The performance would be incomplete without an element of spontaneity, he said.

Recounting Stauber’s on-stage idiosyncrasies, Pirozzi likens Stauber to a spark plug for the band’s members and their audience.

“Jack brings an energy,” Pirozzi said. “I just want to get animated when performing next to him.” 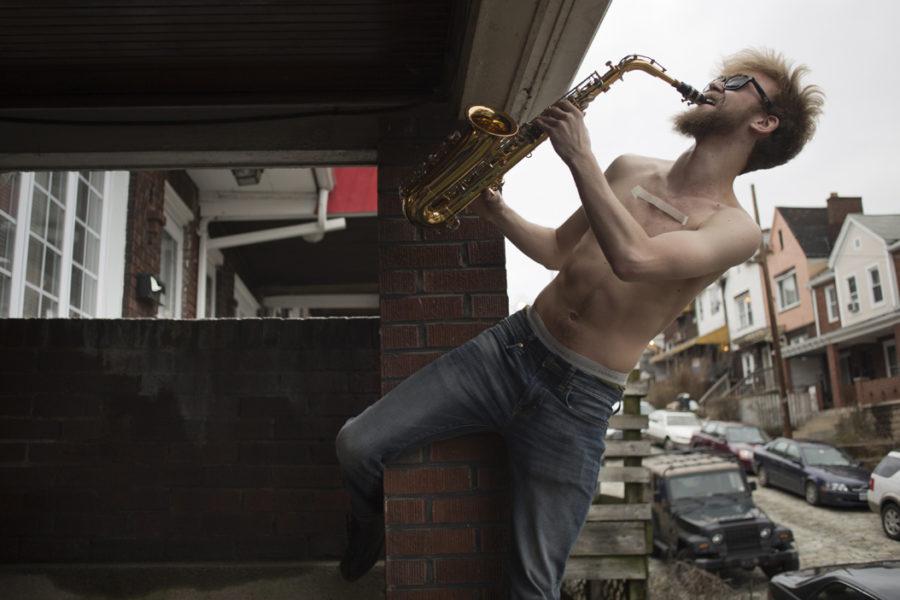 Stauber tries to keep the energy up just as much when playing shows alone. While he doesn’t prefer one over the other, he says that solo performance has a potential for both a greater expressive range and more jitters than performing in a group.

“It’s definitely a lot more difficult to go up there by yourself,” Stauber said. “There’s a lot of free range when you can just hold a microphone and be a complete weirdo with your entire body.”

Donning an oversized sweater, unkempt long blond hair, a tentative grin and dark sunglasses hiding the upper half of his face, Stauber combines a synthesizer and a looper with his own voice at his shows to create songs on the spot for the audience.

Stauber’s creative urge isn’t limited to music. He is also planning on graduating with a certificate in digital media and a minor in studio arts and says that video is just as central an interest for him as music.

He’s made music videos to accompany a few of the songs on “Pop Food,” and produced a short film called “Shream” for what he said was an “outrageous” film festival in Erie.

Despite this lengthy artistic resume, Stauber — with his buzzing, goofy demeanor and ability to charm an audience member in the back row of a muggy, dimly lit basement — doesn’t match the brooding stereotype of the consummate creator. That’s just yet another trope he’s proud to subvert.

“A lot of people think if you’re being honest, you have to be serious,” Stauber said, “but you don’t.”