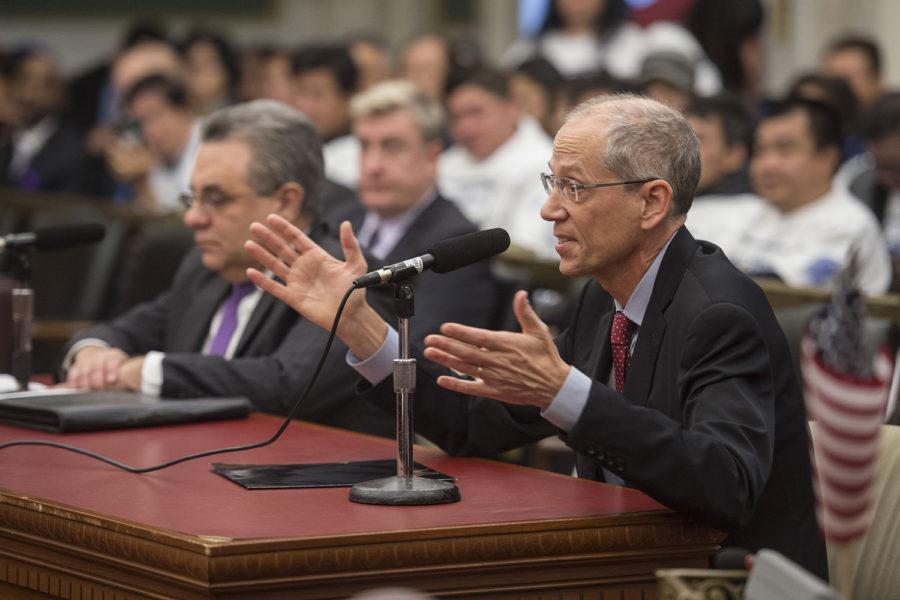 Thomas Farley, MD, health commissioner for the city of Philadelphia, responds to a question from a member of City Council’s Committee on Public Health and Human Services during a hearing on a bill that would prohibit beer deli owners from having protective safety glass separating them from their customers during a hearing Dec. 4, 2017. Farley and Dave Perri (left), head of Philadelphia’s Department of Licenses and Inspections, support the bill. (Clem Murray/Philadelphia Inquirer/TNS)

A proposal that would have been absurd only 10 years ago almost seemed to make sense this week when officials in Philadelphia suggested drastic measures to combat the growing opioid abuse epidemic afflicting the city — and the entire country.

Philadelphia Public Health Commissioner Thomas Farley announced a plan last week to introduce city-sanctioned safe havens for heroin users to consume drugs under the supervision of volunteer medical professionals. These volunteers would administer antidotes, if needed, to users who overdose at the sites.

“We know from other centers that they save lives,” Farley said at a press conference last Wednesday.

In a city like Philadelphia, where total deaths from opioid overdoses last year hovered around 1,200 — four times the murder rate —  providing addicts with ostensibly safe spaces to use heroin seems like a sensible last resort for communities desperate to end the crisis. But while it may be understandable where the idea is coming from, spaces for supervised heroin use are likely to do more harm than good for the epidemic’s victims.

Jonathan Caulkins, a drug policy expert and professor of operations research and public policy at Carnegie Mellon University, acknowledges that supervised injection sites for heroin addicts have gotten mostly positive results so far. Academic research has so far focused on programs in cities like Vancouver and Amsterdam that have already implemented them. Vancouver, for example, hasn’t seen a single death from overdose at any of its sites since beginning its program in 2003. But he says that isn’t the full picture.

“There isn’t documentation of the effects on the larger drug use ecosystem,” Caulkins said in an email interview. “Do people with access to [supervised injection sites] have longer drug using careers, or shorter? Not clear.”

Even if the overall effect is positive for individual users, Caulkins said he is skeptical that enough addicts would actually go to the facilities to make them worth the political fight. Uncertainty surrounds both the legal viability of the sites themselves — which would still be illegal under state and federal law — as well as the problems that might arise if someone who got high at a city-sanctioned site committed a crime elsewhere.

“When you do the math, it wouldn’t take a very large adverse indirect effect to swamp the positive effects,” Caulkins said. “If there is a political fight over [supervised injection sites] that sucks up most of the reform energy, it might distract from energy put into other actions.”

Ultimately, it’s hard to see Philadelphia’s proposal as much more than an act of desperation. Supervised sites wouldn’t do anything to address the root causes of opioid addiction, like painkiller overprescription or chronic economic malaise. And while it’s of vital importance to save as many people currently addicted to heroin and other opiates as possible, that goal would be much better served with increased funding to government programs providing medical attention to current users and real rehabilitation to former users.

“[Supervised injection sites] will only make a small dent in a gigantic problem,” Caulkin said. “We shouldn’t mistake [them] for a solution, if by solution we mean an intervention sufficient to make the problem go away.”