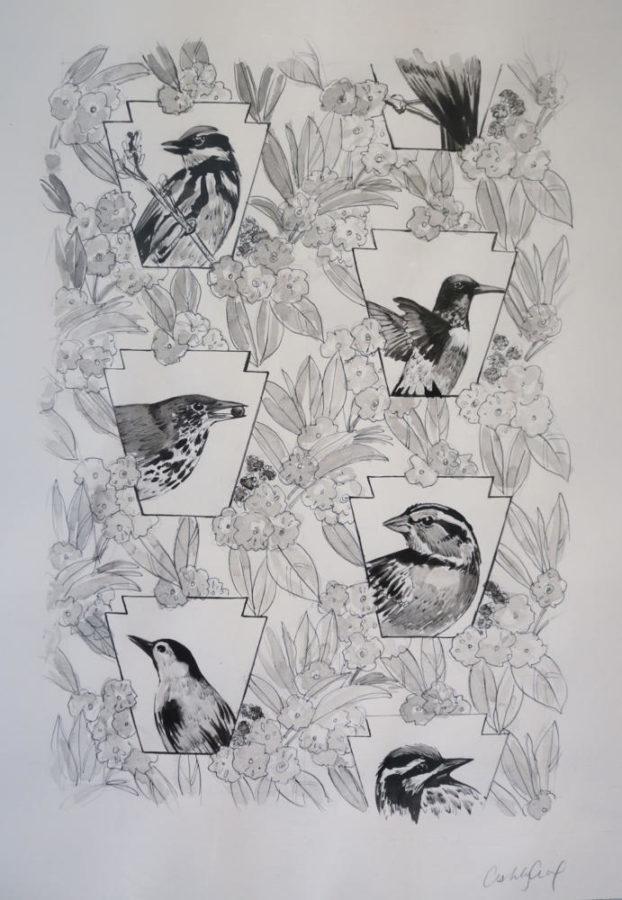 Ashley Cecil’s work is intended to raise awareness about the issue of bird window collisions and offer a solution. Her window film, which is used to cover windows to prevent bird collisions, is sold in the Phipps Conservatory gift shop. (Photo by Chiara Rigaud | Staff Photographer)

Just inside Phipps Conservatory, Ashley Cecil has created the illusion of Springtime in the midst of a harsh Pittsburgh winter — blooming flowers and songbirds rest on bright yellow backdrops along the walls of the Welcome Center, greeting visitors as they escape the cold.

Cecil found inspiration for her most recent artwork and illustrations after arriving in Pittsburgh back in 2011 — and taking full advantage of the local prevalence of natural science museums and institutions.

“Having institutions like Phipps, the Carnegie Museum of Natural History and the National Aviary all in my backyard,” Cecil said. “That’s when the series that I’m currently working on really developed, when I started blending this newfound love of pattern with painting the flora and fauna.”

Coming out of her six-month residency with the Carnegie Museum of Natural History, Cecil — a 37-year-old Highland Park resident with a studio in Homewood — has recently joined with Phipps to display her body of work in an exhibit currently on view at Phipps titled “Birds and Botany.”

The background of Cecil’s mixed-media works on paper features the Pennsylvania keystone symbol and the state flower, the mountain laurel. In the foreground are various bird species rendered in oil paint.

During her residency, Cecil had focused her work around a local research project — BirdSafe Pittsburgh — in which scientists from a host of institutions research ways to mitigate the issue of birds colliding with architectural glass surfaces.

“Birds see the reflection of the sky or a tree and think they’re just going to fly toward it,” Cecil said, “only to find out that it’s a glass surface … putting a lot of pressure and strain on wild bird populations.”

Working closely with the staff of the Carnegie Museum of Natural History — and more specifically with Matthew Webb, the BirdSafe Pittsburgh coordinator — Cecil learned during how to accurately paint six different bird species that are most affected by window collisions.

“One of the things that I always run into when I tell people about what I do here at the museum is that most people don’t know about the issue of the window collisions,” Webb said. “They don’t know the extent to which it’s responsible for so many bird deaths.”

Within the beauty of Cecil’s works lies an important objective — to bring awareness to the issue of bird window collisions and offer a solution.

“A lot of people are familiar with the idea of a bird hitting a window — they may have in fact seen one hit themselves — but they don’t realize that that one bird is one of nearly a billion that died that year from hitting a window,” Webb said.

According to the American Bird Conservancy, up to a billion birds die each year from glass collisions in the United States alone. BirdSafe has an online interactive data map specific to Pittsburgh, which shows the recorded number of birds that died from collisions in several areas around the City over the course of a few years.

This year, BirdSafe will work toward having a few buildings in Pittsburgh treat their windows to prevent bird collisions, according to Webb. This would allow the project to study how effective treating windows is at decreasing bird collision deaths.

According to Jordyn Melino, Phipps’ exhibition coordinator, feedback has been favorable. Visitors and staff love “how bright and colorful some of the original works are,” Melino said.

“The thing that I love about Ashley’s work is that it’s not just artwork that you can hang on your walls. It goes beyond that — it can become a directly applicable window cling that can do what she set out to do, which was to help the cause,” Melino said.

Cecil explained that her window film — used to cover windows in decorative patterns to prevent bird collisions — is on display in the exhibit and sold in the gift shop. It is something that anyone can buy for commercial or residential properties to help mitigate the problem.

“I like the fact that her artwork translates into something that is applicable, and I think that’s a nice representation for our gallery, and for Phipps, to put something like that on display,” Melino said.

Cecil said the strong connection between birds and ecology is what Phipps valued in her exhibit. Birds disperse seeds eat insects that are harmful to plants and pollinate plants — demonstrating the close tie between flora and fauna.

“We have a really good working relationship with Ashley Cecil, and we wanted to continue to support her,” Melino said. “She’s sold work in our galleries and in our gift shop before, so we wanted to give her an opportunity to exhibit some more work over the wintertime.”

Cecil will be an artist-in-residence at Phipps in the fall of 2018, with the purpose of communicating the ecological research done at Phipps through her art.

“We thought exhibiting the work that she just completed with the Carnegie Museum of Natural History would be a great lead into our residency that we’ll have with her again this year,” Melino said.

After viewing her exhibition, Cecil hopes that visitors leave with a deeper love for nature and the connection it has with a multitude of other types of biodiversity. She said she wants her audience to feel a newfound responsibility of caring for and protecting birds and plants.

“I think that we are good stewards of things that we love, so if you can deepen someone’s appreciation for a bird species or a plant,”  Cecil said, “we hope that the result is then that people are better stewards of those creatures.”