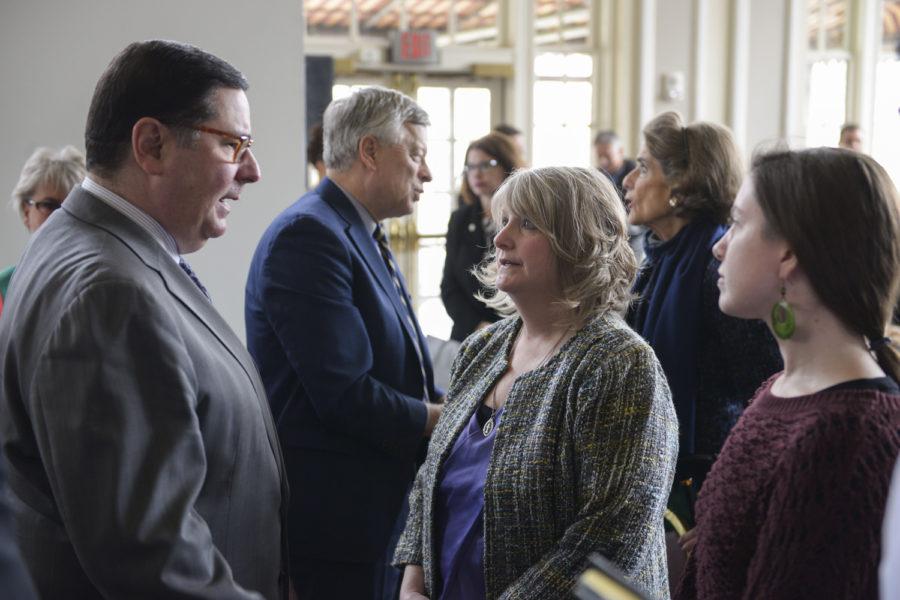 Covered in 22,000 small white pills, each engraved with the face of an opioid overdose victim, the opioid memorial stood behind Monday afternoon’s speakers. Their solemn voices drifted out to an audience who sat listening in silence for the many young lives lost.

The press event marked the beginning of the “Prescribed to Death” opioid memorial hosted by the National Safety Council, a nonprofit organization promoting health and safety in the United States. The exhibit is part of the council’s Stop Everyday Killers campaign, an initiative aimed at raising awareness and educating the public about the risks involved in opioid use.

Pittsburgh is the first stop on the memorial’s nationwide tour, coming shortly after Gov. Tom Wolf declared a state of emergency for the opioid epidemic in Pennsylvania Jan. 10. The exhibit first launched in Chicago in November 2017, and will make stops in Atlanta and Washington, D.C., following its display at Pitt.

Deborah A.P. Hersman, President and CEO of the NSC, opened the event by addressing the urgent purpose of the opioid memorial right now.

“We’re here today because it is impossible to turn on the news and not hear another story about the opioid epidemic in our country,” Hersman said.

She cited a 2017 report from the Drug Enforcement Administration Philadelphia Division and the University of Pittsburgh to bring quantitative data to her emotional plea. Of the more than 4,600 drug overdose deaths in Pennsylvania in 2016, 85 percent were the result of opioid overdoses.

Hersman then described how these statistics have put Pennsylvania at fourth in the nation for opioid overdose fatalities. The issue has become even more prevalent among college-aged students, with overdose deaths doubling in the last decade.

“These numbers are shocking,” Hersman said. “But while the numbers tell a tremendous story, and are important, they don’t tell the whole story.”

Mayor Bill Peduto also spoke about his concerns for the City regarding the issue. He emphasized the crisis should be addressed as a health emergency rather than a criminal outcry.

“People are struggling. They don’t need the added burden of being outcasts, and they certainly don’t need a criminal action approach to be able to solve it,” Peduto said.

Former Pitt Chancellor Mark Nordenberg pointed out the progress groups in the county health and human services have made, and the committed community members at Pitt and University of Pittsburgh Medical Center working to end the epidemic.

“The extent to which good people can mobilize to deal with this problem is very imperative,” Nordenberg said. “The lack of progress, on the other hand, can be inspiration for everyone who cares about making progress on this problem.”

He said he is hopeful the NSC will bring the national problem to the forefront and humanize the overdose victims.

“As the exhibit says itself, behind every statistic is a face, a person and a story,” Nordenberg said.