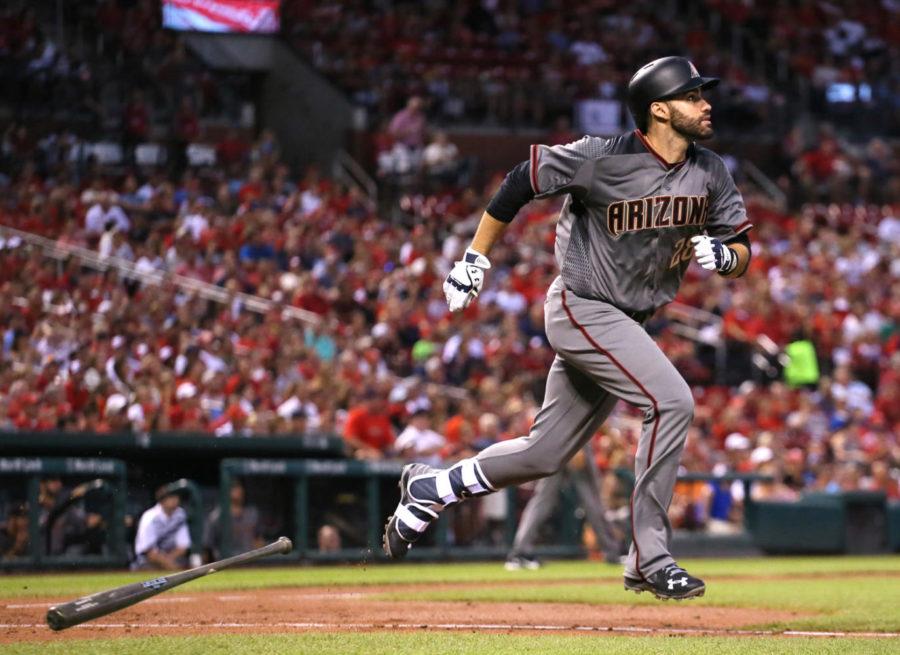 J.D. Martinez had a remarkable season, hitting 45 home runs in only 119 games, including 29 in 62 games after being traded from the Tigers to the Diamondbacks. (Chris Lee/St. Louis Post-Dispatch/TNS)

The Super Bowl may be the biggest event happening in sports this week, but it’s not the only thing going on. The Pitt News sports staff is back with a weekly roundup of this week’s sports headlines … OK, and one Super Bowl take.

Show Me the Money

Pitchers and catchers report for spring training in two weeks, and there are still several big-name free agents available on the market. This includes outfielder J.D. Martinez, who reportedly received a contract offer of around $125 million from the Boston Red Sox but has yet to sign. Former Cy Young winner Jake Arrieta and perennial Gold Glove first baseman Eric Hosmer are all also still waiting to pick a home for 2018. So many of these unsigned players would move a team from mediocre to playoff team, or from playoff team to contender.

Part of the reason these players have yet to sign is the outrageous terms some of them are demanding. Hosmer, for example, reportedly refuses to budge from asking for a seven-year contract, despite being 28 years old and declining. The 2018 season may be robbed of some great baseball if these guys aren’t signed, so either the players need to swallow some of their pride, or teams need to start dishing out some serious cash.

— Jon Shaiken, For the Pitt News

The Cleveland Cavaliers continue to stumble along as the team has dropped six of its last 10 games and currently sits at third place in the Eastern Conference — a drastic underachievement for a team many projected to be one of the NBA’s best this season.

The Cavs’ biggest weakness — poor defense — has not shown any improvements, as evidenced by the embarrassing point totals they’ve given up over the past month to the Thunder, Raptors and Pistons.

Now, to make matters worse, all-star center Kevin Love will miss the next 6-8 weeks with a broken hand. Cleveland’s struggles have led to rumors about the team’s future, some as ridiculous as LeBron James joining the Golden State Warriors next year. James most certainly won’t be heading to Golden State, but all signs point to this being his swan song in Cleveland.

There were two massive trades this week, with one in the NFL and the other in the NBA. The former involved the Kansas City Chiefs dealing quarterback Alex Smith to the Washington Redskins, and the latter involved the Los Angeles Clippers, who traded star Blake Griffin to the Detroit Pistons. Both trades shocked the sports world and blew up Twitter.

Griffin — who has played his entire career with the Clippers, having signed a 5-year extension last summer — shockingly found out about being traded via Twitter. The same goes for defensive back Kendall Fuller, who was part of Washington’s package to Kansas City for Smith. Fuller saw the rumors that he was involved in the deal but seemed to believe they weren’t true and he was safe. A little over an hour later it was confirmed he was changing teams. It’s simply crazy that players are finding out they have been traded through social media.

General managers should be making the phone call to the players individually once the trade has gone through. Inside reporters like Adam Schefter for the NFL and Adrian Wojnarowski for the NBA shouldn’t be the ones to break the news, and players’ hearts, on Twitter.

If you were up at 3:30 a.m. Sunday, then you had the chance to see Roger Federer extend his record number of major titles and continue to defy the limitations of aging. If you have a normal sleep schedule, like most people, here is what you missed.

What’s crazy about Federer’s victory is that he did it just five months after his 36th birthday. He became the second oldest player ever to win a major. This year’s Australian Open win was also Federer’s third major victory since turning 35. No one has ever done that. Now, Federer is closing in on the ATP No. 1 ranking, which would make him by far the oldest player to ever hold that position.

Even if you don’t care about tennis, at least pay attention to this, because the next time you see someone play this well this late in his career probably won’t be until, well, this Sunday when Tom Brady does.

With Sunday’s Super Bowl game between the Philadelphia Eagles and the New England Patriots on the horizon, fans have many questions about the game. Will the Eagles pull off the upset? Will the Patriots continue their dominance? Will the game be close? Will it be a blowout?

History tells us the game will not be a blowout. It will come right down to the wire, just like every Patriots’ Super Bowl in the Brady-Belichick era has. All seven of those Super Bowl matchups were decided by six points or less, so there’s no reason to expect this one will break that trend.

If the Eagles want to win, they’ll need to take a page from the New York Giants’ teams that beat the Patriots in both 2008 and 2012. The Giants held the Pats to 17 points or less in both upset victories. If Philadelphia can’t do that, the Lombardi Trophy will go to New England, which is 5-0 in Super Bowls when scoring 20 or more.