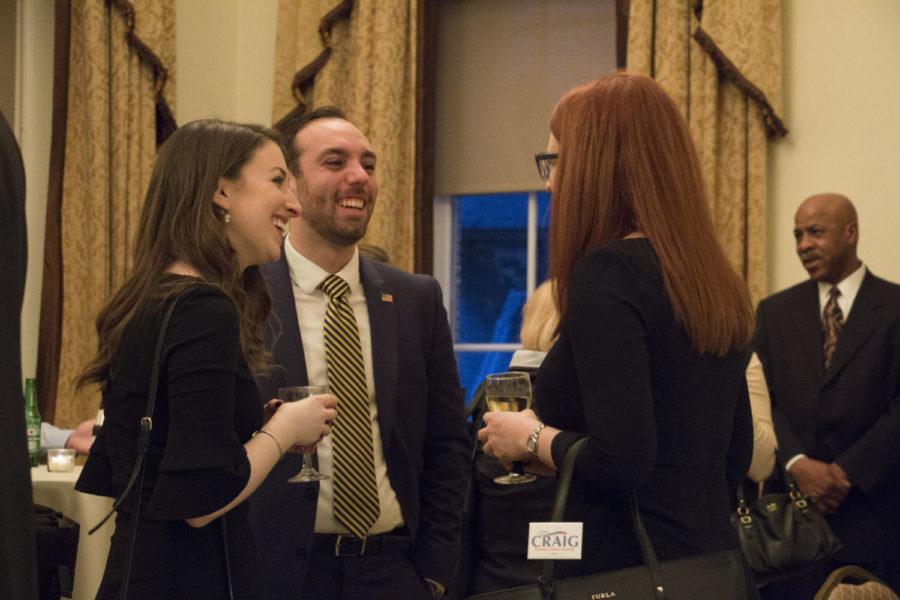 When James Craig’s father was diagnosed with terminal cancer in 2014, his mother, an opioid addict, overdosed on prescription pills and died. Opioids weren’t new for the family — his aunt overdosed and died two years before that, and his father was an addict when diagnosed. His brother also overdosed on fentanyl-laced heroin and died in 2016.

“We are losing an entire generation [to opioids],” Craig said at a fundraising event in the University Club Gold Ballroom Tuesday night. “We need to … get serious about ending the opioid epidemic by ensuring that adequate treatment and support is available — not only for those suffering from addiction, but for their families.”

The 29-year-old from Washington County held his first fundraising event Tuesday to announce his campaign on the Democratic ticket for Pennsylvania’s 2018 midterm state senate election. Donors in attendance gave between $25 and $2,500 for tickets to the closed event. Craig is currently the only Democratic candidate, but if a challenger declares candidacy, a closed primary election will be held May 15. The 20 attendees included current and former members of Craig’s college fraternity, Sigma Chi, and co-host Dan Gilman, Mayor Bill Peduto’s chief of staff.

If Craig wins the upcoming election against incumbent Republican Camera Bartolotta, he will represent constituents from Greene County and parts of Beaver and Washington counties. Although he wouldn’t represent the neighborhood, Craig is familiar with Oakland — he received his bachelor’s degree from Pitt in 2011 and graduated from Pitt Law in 2014.

Craig said while in college, at the peak of his parents’ drug addictions, he turned to his fraternity brothers for support  — which he said Sigma Chi still provides. In the crowd was Bob Boucher, Pitt class of 1990 alum and member of Sigma Chi, who came from his home in the North Hills to support Craig’s first event.

“I’ve known Jim for a number of years, and I found out that he was planning on running,” Boucher said. “He’s dedicated, and I thought he’s the kind of guy we want to have in office. He’s a great guy, an upright guy.”

At the event, Craig advocated for changing the way schools are funded, so children in low-income areas receive as much as children from wealthier areas. Craig also said he’d work to have the state make its best institutions of higher learning accessible to everyone.

“As far as our colleges and universities, Pitt and Penn State are the two most expensive public state universities in the nation,” he said. “The universities have a return on investment that is unparallelled in any other investment with government dollars. We should be investing … so people have the opportunity and can afford to go to these schools.”

“I honestly feel that the energy [Young] and Craig are bringing can win this thing,” he said.

Craig also spoke about his support for fracking, which only 25 percent of Democrats are in favor of, according to a 2016 Gallup poll. If he were to win the race, he would be representing a district where drilling for natural gas in Marcellus Shale is common. In Washington, Greene and Beaver counties, 209, 158 and 20 new wells were drilled in 2017, respectively. In Allegheny County, 26 wells were drilled in that time period.

“We experienced an explosion of job growth because of the Marcellus Shale industry,” he said. “[But] I see so many people I grew up with [leaving]. My nephew, for example, just moved to Colorado because the jobs building the pipelines are moving on.”

Craig proposed a compromise that supports continued Marcellus Shale fracking to maintain currently existing jobs while focusing on education and technology integration to create new sustainable jobs for the future.

Craig said he also plans to continue supporting sustainable job creation and is an advocate for labor unions in Southwestern Pennsylvania. He said there currently is an “unparalleled attack” on unionization and the right to organize in the state.

“We need to protect these rights because none of us alive remember what it was like before FDR passed the Taft-Hartley Act,” he said. “We need somebody watching.”

Craig said he’d never considered running for office before 2018, but his wife, Melissa Berman Craig — who met him while they were both students at Pitt —  said she knew otherwise.

“From the very day I met him I knew this was in his goals,” she said. “It wasn’t a surprise when he finally decided to throw his hat in the ring.”