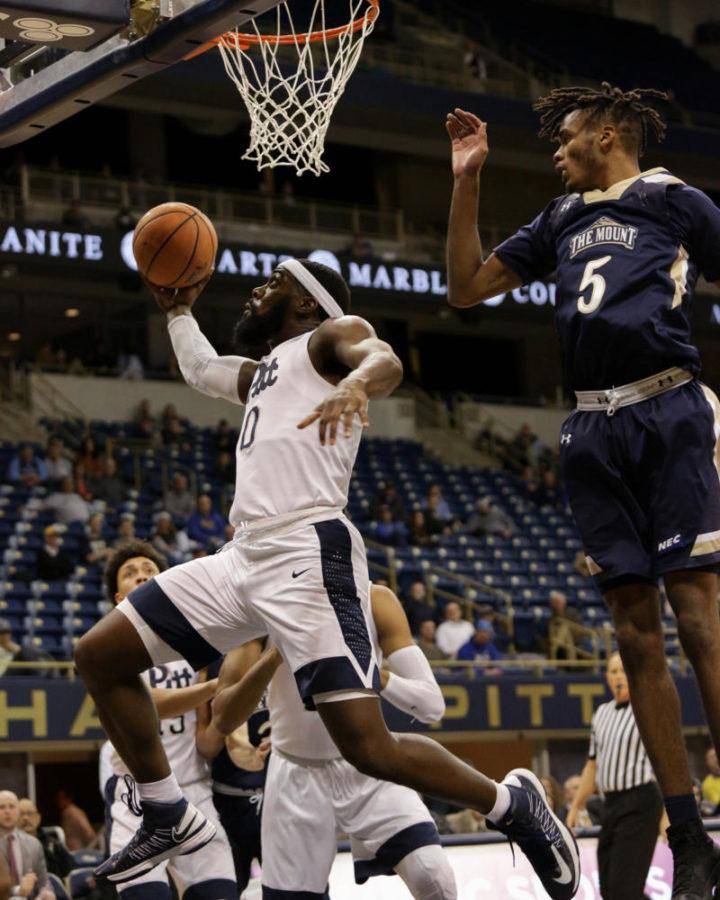 By Jon Shaiken | For the Pitt News

There have been a number of standout seasons for winter sports at Pitt — for better and for worse.

For the track, field and women’s tennis teams, sustained individual success has been the story of their strong seasons. As for the struggling men’s basketball team, a junior college transfer has been one of the few positives in a lost season.

The Pitt men’s basketball team is having a disappointing season, but if there has been one bright spot for the team, it has been junior guard/forward Jared Wilson-Frame.

The junior transfer, who spent his first two years of college at Northwest Florida State College, has made a big impact over the last few games. In his last four, he averaged 18 points and 5.5 rebounds per game.

In the Panthers’ close loss against Syracuse on Jan. 27, the Hartford, Connecticut, native had a double-double with 22 points and 13 rebounds as well as three steals. For much of the first half, he was Pitt’s only source of offense, scoring 13 out of the team’s 20 first-half points.

Wilson-Frame will try to lead Pitt to its first conference victory this season as they travel to South Carolina to play No. 16 Clemson, Thursday at 7 p.m.

Sophomore distance runner Nick Wolk once again proved his value to the Pitt track and field team last Saturday. He bested a 27-year-old program record in the men’s 3000m with a 8:07.09 time at the Meyo Invitational at Notre Dame. His time shattered the previous mark—set by Keith Dowling in 1991—by more than two seconds.

Wolk, who hails from McMurray, has been a star for the Panthers in both track and field and cross country this year, posting Pitt’s best time at the ACC Cross Country Championships 8K in the fall. He also helped the team to 10th place at the NCAA Mid-Atlantic Regional in November — its best finish in over a decade.

His success has carried over into the winter season. Wolk and the Pitt track and field team now look ahead to the Kent State Qualifier this upcoming weekend. It will be Pitt’s final meet before the ACC Indoor Championships.

The Pitt women’s tennis team is performing well in the early stages of its season with a record of 3-1. Part of its success is due to senior Callie Frey, who improved to 4-0 with a win in straight sets over her opponent during Pitt’s loss against VCU this past Saturday at home.

Frey has also starred in doubles play. She and her partner, first-year Camila Moreno, hold a perfect record at 3-0 in doubles matches. They defeated Bowling Green 5-2 Friday to earn their third win. Their match against VCU was left unfinished with the set tied 5-5, robbing them of a chance at 4-0.

The Panthers and Frey have a busy weekend ahead of them, as they are set to host Eastern Michigan Saturday at 2 p.m. before their ACC home opener against Louisville Sunday at 2 p.m.