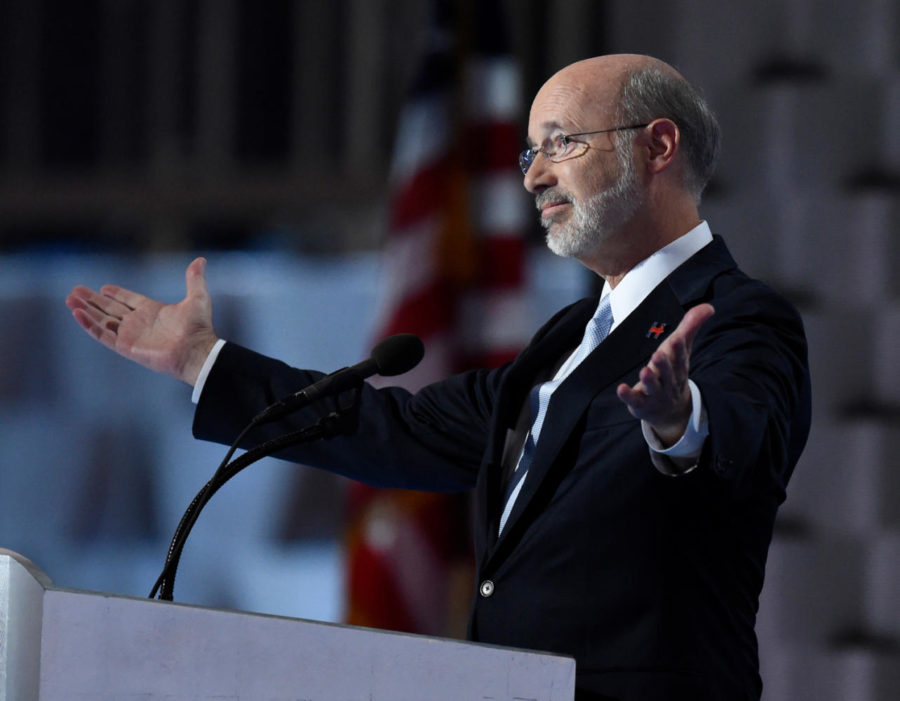 Pennsylvania Gov. Tom Wolf speaks during the last day of the Democratic National Convention at the Wells Fargo Center in Philadelphia on July 28, 2016. (Clem Murray/Philadelphia Inquirer/TNS)

Gov. Tom Wolf unveiled the fourth yearly budget of his term Tuesday — and unlike his previous three, we might actually see it fully passed before the end of the year thanks to the 2018 midterm elections.

The 2018-19 budget is notably progressive — Wolf is calling to raise both funding for public schools and the minimum wage. But until November midterm election results introduce the possibility of a more Democratic Congress, some of his propositions seem unlikely to pass in the currently Republican-run legislature.

Not all of Wolf’s budget is doomed to face a gridlock in a GOP-heavy Congress, though — his proposal to increase funding for job training should receive bipartisan support. But other budget components are likely to meet more difficulty.

It’s no secret that Wolf’s calls for a higher minimum wage and a natural gas tax are largely Democratic goals, so it appears that, at least until midterm elections, this year’s budget will see some major changes to pass through the state legislature.

Wolf proposes to raise the minimum wage from $7.25 to $12 — a move that, according to his administration, would save the state upwards of $100 million in social and human services costs. That money could be put to use in other areas like education, which is exactly what Wolf appears to be planning.

He’s proposing an increased $100 million in public school funding, but just $15 million for state-owned universities — hardly enough to alleviate students from the crippling debt that comes with earning a college degree.

And for Pitt and other state-related schools, don’t hold your breath for increased funding any time soon. Wolf has once again flat-funded state-related universities, which means Pitt funding will rest at its current $144.2 million.

Wolf’s possibly appealing to the election year by avoiding a personal income tax hike, and is instead shifting tax increases over to natural gas drilling, another hallmark Democratic proposition.

But Republicans shouldn’t be so quick to deny the gas tax. It’d raise an estimated $250 million, according to the Wolf administration, and make good use of Pennsylvania’s ample supply of natural gases.

Living in Allegheny County, home to only 63 natural gas wells, it can be easy to minimize the role natural gas drilling has on the community and commonwealth. But simply looking at a map of wells in Pennsylvania shows how integral this natural gas is to the state’s livelihood and ability to employ Pennsylvanians.

In places like Bradford County, boasting just over 1,000 wells, drilling is crucial to their economic climate. It just makes sense to tax the natural gas industry over hiking personal income taxes, and Wolf recognizes that.

Although Wolf’s history with his previous three budgets is an exhausting tale of legislative deadlock and indecision, this year’s budget could have a different ending — even if it doesn’t come by the July 1 deadline.

This November’s midterm elections could usher in a new Democratic influence in Congress — the kind of influence needed to fully pass a budget like Wolf’s.

Eighty-eight percent of readers surveyed in a Post-Gazette survey say Wolf’s budget will not get passed as is — and they’re probably right. But if Democrats mobilize and vote in November’s election, where every seat in the House of Representatives and half the Senate seats are up for grabs, a budget like this may be the Commonwealth’s reality in 2019.