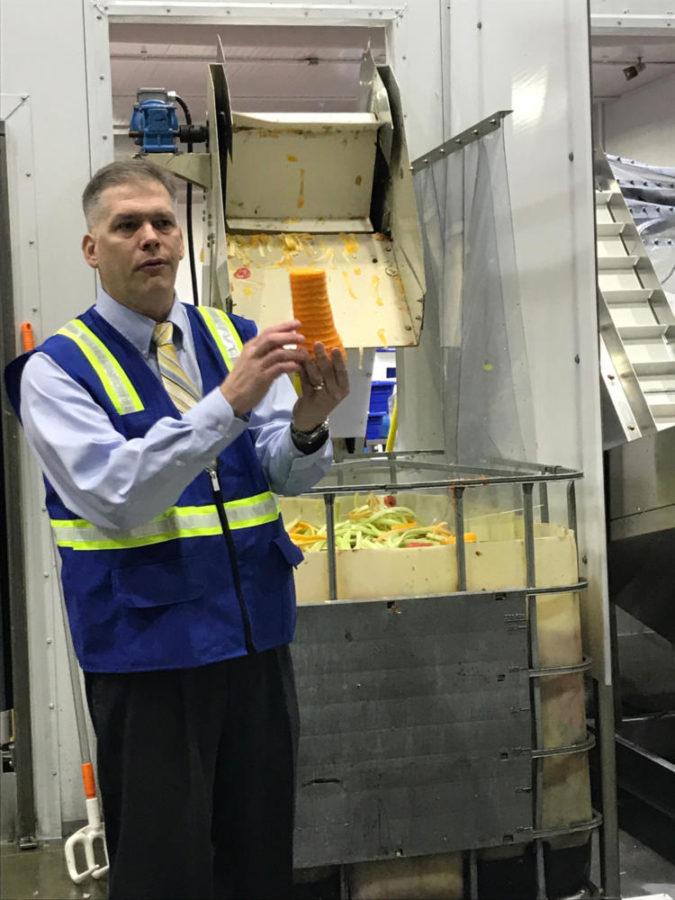 Grilled chicken is a popular dish at the Flying Star Diner in Market Central. Lines for it can stretch up to 20 people, and more often than not a freshly served batch runs out minutes after it’s taken off the grill.

And while students may be preoccupied with getting a piece or two before the chicken runs out, Nick Goodfellow wants them to know its locally sourced and wasn’t raised with any growth stimulants or hormones.

Goodfellow, the sustainability coordinator for Pitt’s Dining Services, is involved in the Real Food Challenge at Pitt. RFC is a national student initiative aiming to increase the amount of “real food” — food classified as sustainable, fair, humane and locally sourced — served in dining halls on campuses across the U.S.

At Pitt, RFC members are aiming to serve 25 percent “real food” across campus by 2025. “Real food” that is currently served in Market Central, beside the chicken, includes apples from local company Dawson’s Orchard and ecologically sound coffee from Aspretto Coffee, among others. Goodfellow said the amount of “real food” already in the dining hall was at 9 percent when RFC started out in 2015.

But since RFC switched out the chicken at Flying Star and Magellan’s last year with a more local product, the number has most likely boosted up to around 15-16 percent. The new chicken comes from Gerber Poultry in Ohio, and is delivered to Pitt by Paragon, a distribution facility in Warrendale, Pennsylvania.

Paragon sources food from producers, holds and organizes it and then ships it out to restaurants, hospitals, universities and other establishments in the Pittsburgh area. Goodfellow, along with RFC students and Sodexo interns, toured the facility Saturday to better understand where much of the “real food” the challenge has brought to Pitt comes from.

The facility itself is 88,000 square feet and has been operational since February 2016. Anthony Tomasic, director of sales for Paragon, led the tour. And spoke about Paragon’s sustainable and ecologically sound practices. For instance, the company has a Safe Quality Food certification, a Green Business Certification, and is a member of Pro*Act — a national network of local, independent produce companies that partner with farms that agree to constantly improve their conservation efforts and food safety standards.

Tomasic first led the group through what he called “NASA for food” — Paragon’s large refrigerated warehouse space. The rooms differ in temperature depending on what is being stored.

“Depending on if they want to butterfly them or want them softer for guacamole, people will buy from us based on those stages,” he said.

Tomasic also showed the group the protein section of the warehouse, where items such as the chicken Pitt buys is stored at 34 degrees. The group moved on to the section of the warehouse where dry goods, such as chocolate for baking are stored, at 55 degrees. Tomasic esaid ripened produce are also sent here once they mature to a desired point — serving as a “stasis room” for other fruits and vegetables.

Tomasic said the company figures out what and how much to store based on an inventory management system that pulls data from previous orders and considers what harvests have been like. The facility receives 45-53 truckloads of food each day from western Pennsylvania and elsewhere in the country and turns food over in fewer than two days.

“It is a guessing game ultimately, and you get burned sometimes,” Tomasic said. “Everything in here is dying, that’s what makes turning the building over so important.”

Tomasic said droughts, hurricanes and other natural disasters may impact how much of a certain food Paragon ends up receiving. How much local food they store depends on what’s in season and what local farmers are able to produce at a given time.

Goodfellow said RFC students are emphasizing the local food aspect over the organic aspect of the RFC in order to contribute to the local economy and remain cost-effective. Produce that are labelled organic often come from faraway, Goodfellow explained, and transportation is expensive and environmentally harmful.

“Local farmers are often already practicing organic and sustainable farming methods but don’t have the money to go through the process to be certified organic,” Goodfellow said. “There’s organic before the organic label.”

Tomasic then led the group to the decanting room, where new produce are washed with a peracetic acid to eliminate remaining bacteria. He also showed them the food processing room, where raw goods are washed, packaged and then sent to storage.

The tour wrapped up at the 15 loading docks in the rear of the facility. Thirteen receive and send out trucks laden with food while two cart out waste for recycling and biodegrading. Tomasic said Paragon trucks usually start making deliveries at midnight, after food orders are compiled.

“An Olive Garden in Elyria, Ohio, will never see us,” Tomasic said. “We get there, open up, disarm the alarm, let ourselves in, make the delivery, lock up and start the alarm again, and when the workers get there in the morning all their products are in their coolers.”

Senior natural sciences major Amy Dawson, a member of RFC, said she felt the tour was informative and was pleased that Paragon is strict about the sort of food it purchases.

“It’s good to know that this place has this many standards, that they’re not ‘greenwashing,’ like saying they’re being sustainable when they’re not,” she said. “We can actually trust them.”