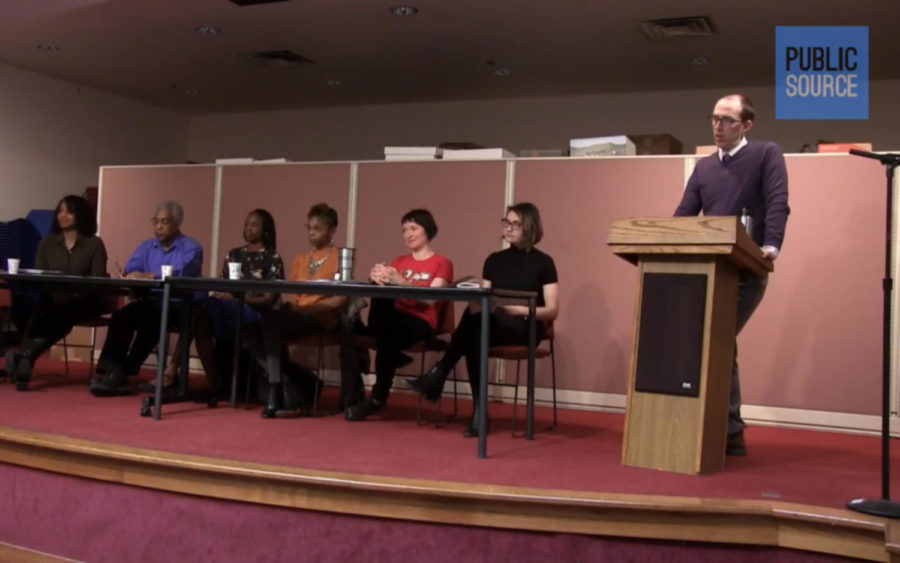 Amazon announced in September that the company was looking for a city to build its second headquarters. Hundreds of cities submitted proposals — many offering the online retail giant tax credits and other financial incentives. Amazon selected Pittsburgh as one of the 20 finalists in January.

Jason Beery, a researcher at UrbanKind Institute, opened the forum by summarizing his article “Is this for Everyone? Qs about Amazon’s HQ2” and introducing the panelists. He studied Amazon’s main headquarters in Seattle to help predict what may happen in Pittsburgh.

“If we can look to Seattle, we can infer what might happen here,” Beery said. “The office jobs advertised for HQ2 mostly will go to young, white, male techworkers.”

According to Beery’s paper, if a second headquarter opens in Pittsburgh, it will bring an influx of 50,000 jobs with a $100,000 average salary. Green-Hawkins, director of the Civil and Human Rights Department of United Steelworkers, further highlighted the disparity these proposed jobs could create but also pointed to a solution.

Green-Hawkins emphasized that ancillary jobs, such as janitorial and food service, are probably grouped into these new jobs. She also discussed the major role unionization could play.

“Unionization is going to be crucial to equality and pay equity for people who work at all these resulting jobs coming from Amazon,” Green-Hawkins said. “An agreement not to oppose unionization should be and can be apart of any agreement for a company like Amazon who is coming here.”

Sanina, executive director of online news outlet PublicSource, suggested Amazon and the cities fighting for the headquarters be transparent about the proposals. She criticized local officials’ secret throughout the proposal, saying it is hard to assess the implications of Amazon coming to the City if little information is known.

Other cities, such as Philadelphia, have released details of their proposal, but local officials have kept the public guessing.

“The officials have been saying it is a nondisclosure agreement, and that there are trade secrets a part of this proposal that impedes our competitiveness against other cities,” Sanina said. “Mayor [Bill] Peduto said he would go to court to help keep this proposal a secret.”

Pugliano, the co-founder and CEO of StraightFoward Consulting, listed several other concerns regarding Amazon, such as what the job pipeline would look like and how to get Pittsburgh citizens prepared instead of bringing others into the City.

“I would like to see partnership with colleges and universities so that graduates have a pathway to employment,” Pugliano said. “It’s important that young people see what all that time and work will lead to.”

Hicks, a Hazelwood resident and activist, elaborated on how Pittsburgh residents would be affected. She cited the median average income for African Americans in Pittsburgh as $26,800 and how many of these people will not be considered for the $100,000 average salary that Amazon is planning to offer.

“Even if you look around the room today, how many people of color do you see?” Hicks asked the mostly white audience. “It’s costly to be a part of this conversation, and we don’t realize that these people [of Hazelwood] who are not here are the ones who are carrying part of the burden.”

Redwood, a professor at Pitt’s School of Social Work, also emphasized how the minority community could be affected with Amazon’s arrival. He said the development would cause a destruction of affordable housing.

“I don’t want Amazon to come to Pittsburgh and I don’t care if they blame me if they leave,” Redwood said.

Despite the variety of problems and concerns addressed, the general consensus was that the conversations that happened during the community meeting were important and necessary.

Jordan Malloy, 22, from the Garfield Area, attended the forum because she was concerned about the general economic development of Pittsburgh and how it can exclude people of color.

“I think the forum definitely got people together talking about this stuff,” Mallow said. “I think this is pretty new to have all these organizations here to represent our communities.”

Pugliano was also excited about the topics of the forum and the progress that was made during these two hours.

“What I am excited about is that through all these conversations, these issues that we work on all the time day in and day out are being brought to light,” Pugliano said. “I am up for conversations like this regardless of whether Amazon comes or not.”