The NBA’s injury problem is overblown 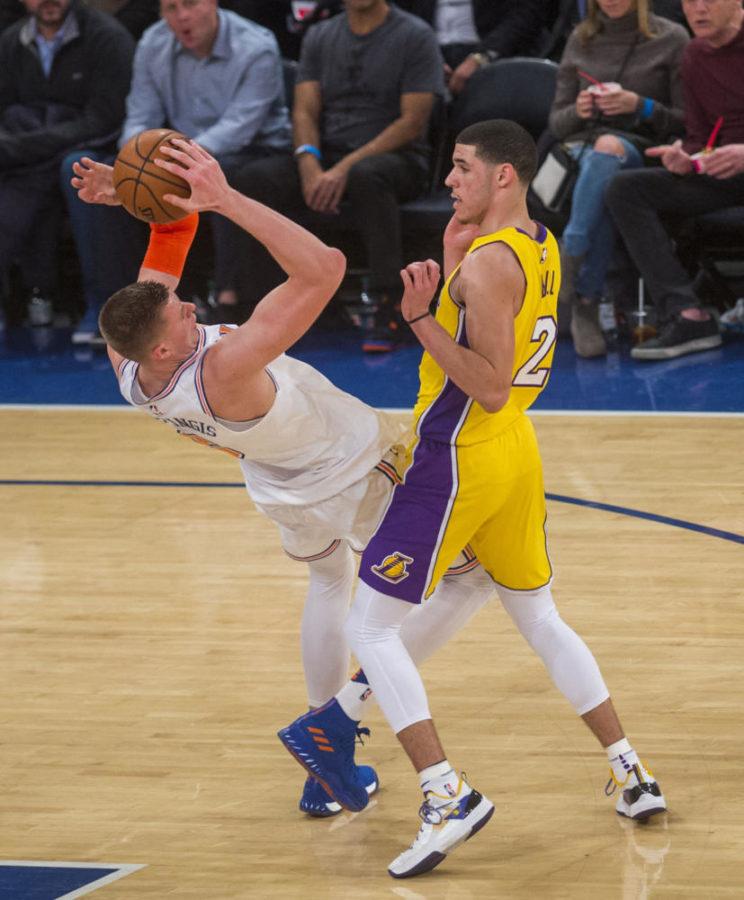 By Cale Berger | For the Pitt News

Celtics forward Gordon Hayward was set to make his team debut opening night of the 2017-18 NBA season. He had just signed a four-year, $128 million contract during the off-season, joining forces with Kyrie Irving and Al Horford in an attempt to dethrone the Cleveland Cavaliers in the Eastern Conference.

Boston led by three just seven minutes into the season opener against Cleveland Oct. 17. Irving lobbed an alley-oop pass to Hayward, who was running toward the basket. The errant pass caused an airborne Hayward to collide with two Cavaliers, forcing him to land awkwardly, fracturing his tibia and dislocating his ankle.

Players, coaches and fans gasped and cringed at the rising star’s gruesome injury. Just as soon as it started, Hayward’s season was all but finished.

Like most injuries, Hayward’s was a freak accident — an unfortunate fall. Still, the myriad of additional injuries to star players this season has given rise to the narrative that there are more injuries now than in the past.

It may feel like the NBA is rattled by injuries more so than the past, but the truth is we have no way of knowing if that’s true until the season ends. Injuries could seem worse this year because they’re affecting notable players like Knicks forward Kristaps Porzingis and Pelicans center Demarcus Cousins. The plethora of injuries to stars is not a sign of rising injury rates, but simply a stroke of bad luck.

Injuries are inevitable in any sport. The physical nature of competition pushes the human body to its absolute limits of strength, endurance and flexibility. Professional basketball is no exception.

Hayward, Cousins and Porzingis have all suffered season-ending injuries. The real shame regarding these injuries is that these players were either recently signed to large contracts or were having career-best seasons.

Cousins was starting to look comfortable playing with New Orleans after being traded last season. He was averaging 25 points per game and career highs in rebounds and assists. He was well on his way to the first playoff berth of his career when he ruptured his achilles tendon diving for a loose ball Jan. 26.

Porzingis had been a phenomenon since entering the league as the fourth overall pick in 2015. The Latvian superstar was scoring nearly 23 points per game and leading the league in blocked shots on his way to his first All-Star game appearance. He tore his ACL Feb. 6.

Cousins and Porzingis are not the only All-Star selections who will miss the game in Los Angeles this Sunday. Cavs forward Kevin Love will be held for six to eight weeks due to a broken hand, while Wizards point guard John Wall is expected to miss the same amount of time, out with a knee injury.

Warriors guard Stephen Curry, Rockets guard Chris Paul and Lakers guard Isaiah Thomas have all missed extended time, while Spurs forward Kawhi Leonard’s lingering injuries from last year’s playoffs remain an incredible conundrum. The first three have since returned to action, with Leonard only returning for 13 games before falling back out of the lineup.

It’s entirely possible that these injuries could simply be a result of overwork and accumulated fatigue.

This is the case for Porzingis’ injury. He had a career high usage rate — a stat that estimates how many of a team’s plays involve a player — at 31.2 percent before being ruled out for the year.

He told reporters he was worn out back in early January — an admission that much of the sports world scolded him for. But it is likely that he was, in fact, fatigued.

Porzingis was likely beginning to feel the effects of the long NBA season, but this isn’t so for all injuries.

When players that are seventh, eighth and ninth in the rotation get hurt, it is only an issue to the fans of that particular franchise, but when star players tear a ligament or break a bone, the gravity of the situation is felt across the league.

Numerous current and former All-Stars have and will miss significant portions of the 2017-18 NBA season. Fan favorites are now prevented from participating, creating the illusion that everyone is hurt.

Injuries just happen. They are unavoidable. Players have been tending to their own bodies better than ever before, far from the days of Charles Barkley eating McDonald’s prior to games.

They still find their bodies ravaged by the physicality of the game. It just so happens to be the case that those inevitable injuries have struck stars as opposed to role players.

It is the name recognition of these injured players that has led the public to believe that injuries are on the rise. Just because a few of them get banged up does not mean that the NBA has an injury problem.