Panthers swing in to spring: Baseball and softball preview 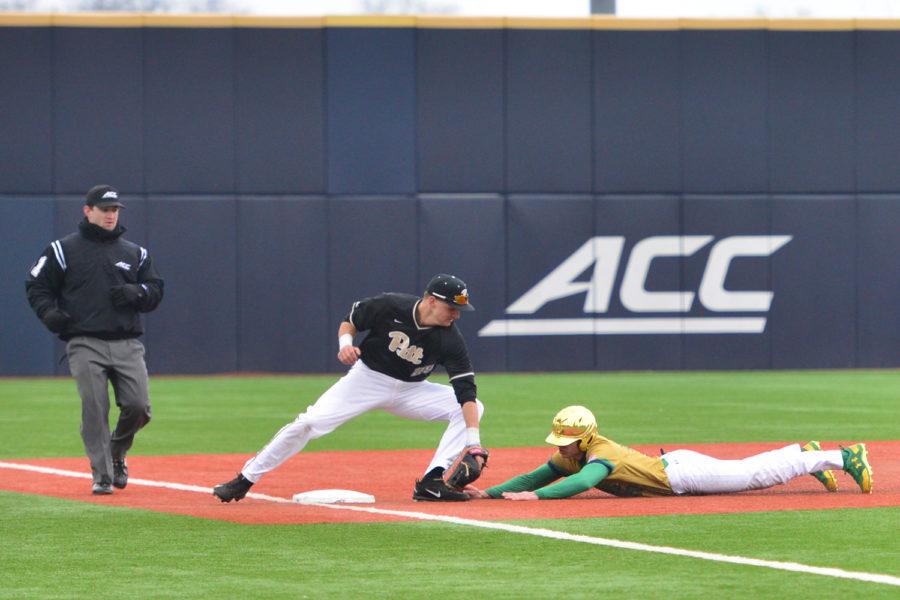 By Michael Nitti | For the Pitt News

While the Pirates just sent their pitchers and catchers down to Bradenton, Florida, for spring training, the Pitt baseball and softball teams are already getting started in their 2018 campaigns.

Both Pitt squads are coming off of difficult seasons that saw each team finish with losing records in the ACC.

The Panthers bring both consistency and power from last year’s lineup, with their leaders in both batting average and home runs returning from last season.

Amos also started all 53 games for the Panthers and led the team with a .456 on-base percentage.

Among those returning to the mound for the Panthers is redshirt senior Matt Pidich, who led the team with four wins last year. With several contributors from last year’s team graduating, Pidich and sophomore Dan Hammer are the only two starters that remain from last year’s pitching rotation.

Pidich is entering his second full season coming off of Tommy John surgery, a procedure used to replace torn tendons in the elbow.

“As of now, this is the healthiest and strongest I’ve ever been.” Pidich said at Spring Sports Media Day last Tuesday.

Injuries played a big part last year for the club, but head coach Joe Jordano is optimistic heading into this year.

“This year we’re healthy. We’re in good shape in terms of depth, not only from a position player perspective, but from a pitching side,” Jordano said.

This year’s team will feature 14 newcomers, including nine true freshmen. Among the new additions are three infielders, three outfielders, two pitchers and one catcher.

The other two are first baseman Caleb Parry — who posted a .276 batting average and .994 fielding percentage last season — and pitcher TJ Pagan, who made 14 appearances in his debut season with the Panthers after transferring from Hartford Community College.

Some notable players coming off their freshman campaigns include sophomores Amos, Hammer, outfielder Nico Popa and relief pitcher RJ Freure. Hammer was third on the team in innings pitched and strikeouts with 59 and 51, respectively.

Freure logged 38 innings out of the bull pen while striking out 46, which was most among relievers on the club. Popa started 50 games last season and was second on the team with 10 stolen bases.

The Panthers kick off their season this weekend in Florida for the Sunshine State Classic with games against Toledo and Saint Louis, along with two games against Oakland.

Guided by head coach Holly Aprile, Pitt softball is already off to a hot start, going 3-1-1 so far as they look to build off of last year, when they went 24-23 overall and 7-17 in the ACC.

This year’s senior class has five players, three of whom were regulars in the starting lineup, and another who saw significant playing time on the mound. Standout designated hitter and catcher Giorgiana Zeremenko led the team in almost every offensive category with 11 home runs, 10 doubles, 35 runs batted in, a .295 batting average and a .604 slugging percentage.

After a stellar 2016 season, in which she hit .366, senior outfielder Erin Hershman dropped off, hitting .202 last season. If Hershman can bounce back this year, it will go a long way toward the Panthers’ success in the ACC.

Senior shortstop McKayla Taylor, who clubbed eight home runs and drove in 25 runs last season, said she wants to set an example for teammates on the field this year.

Last season, senior pitcher Kayla Harris started 22 games, half of which she completed, with two shutouts. Harris was second on the team in wins with nine, and second in innings pitched with 119.

Sophomore Brittany Knight is coming off a strong freshman season leading the team in innings pitched with 151.2 and wins with 13. Also returning is junior pitcher Sarah Dawson, who notched a team high three saves last season.

Junior third baseman Olivia Gray is coming off a productive season as well, hitting .290 with seven home runs and 25 runs batted in.

The Panthers look to continue their hot start at the ACC/Big Ten Challenge in Chapel Hill this weekend with two games against Wisconsin and two against Iowa.