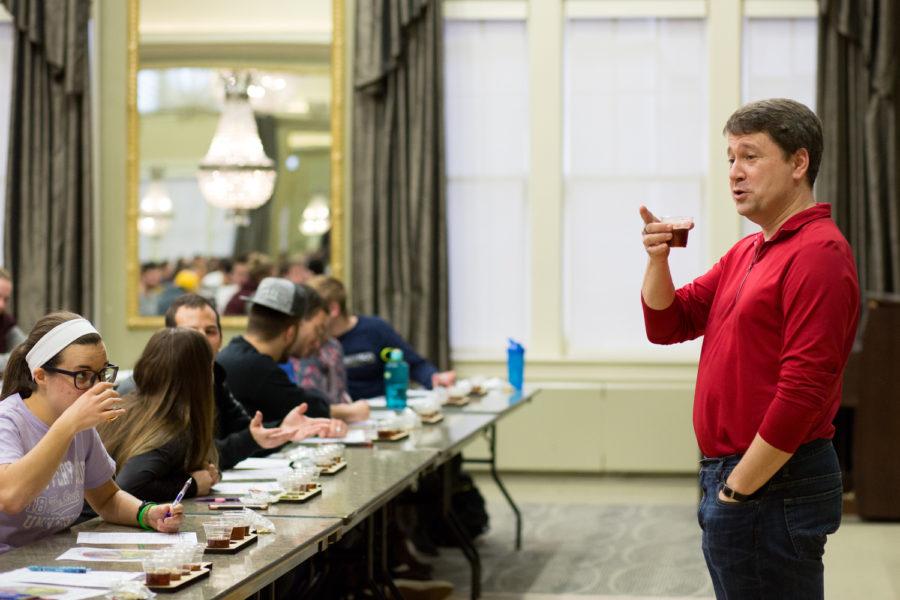 Groups of students sat around several computer-topped desks in a Benedum Hall classroom, casually making conversation as they waited for their Thursday afternoon class to begin. Suddenly, a question flashed across the screen: “Belgian or German wheat beer?”

Professor Robert Parker repeated this question, marking the beginning of class. He counted the hands that raised in response and determined that neither beer won.

Last spring the Swanson School of Engineering added an unusual elective to their course offerings — Engineering a Craft Brewery — or as students more commonly call it, “beer class.”

Chris Siak, a senior studying electrical engineering, said he enrolled in the class for a simple reason.

“You get to drink beer during class,” Siak said. “Why wouldn’t I want to take it?”

Parker, the vice chair for graduate education and a professor in the chemical and petroleum engineering department, introduced and now teaches the class. Parker first began casually brewing at home in 2000 alongside a colleague at Carnegie Mellon University. He decided to incorporate the craft into Pitt’s academics last year when he saw how popular craft breweries had become.

Parker said the class is beneficial for students because the process is “an outstanding example of engineering and product design.”

“The layout and design of the facilities and the equipment, and how do you move water and how does it get heated and cooled the way it needs to, these are all engineering processes,” he said. “The conversion of sugar out of grain and to alcohol is good reaction engineering, so you’ve got some good chemical engineering, mechanical engineering taking place.”

The class, which fulfills elective requirements for several engineering majors, is taught in the spring and open to students over 21. Parker designed the class to give students practice in designing an actual beer in case they decide to work in craft breweries in the future. Students pay a $100 fee to enroll in the class, which helps pay for the provided beer.

Siak said students are allowed to drink in class on “sensory perception days,” which are sessions Parker holds six times per semester to allow students to taste the beers he lectures about in class, followed by a quiz to test the students’ knowledge on specific beers. The quizzes are designed to help students distinguish between beers that are made by different processes.

On perception days, class is held in the O’Hara Student Center rather than in a classroom. Bartenders serve the students beers from local breweries and occasionally from Parker’s own collection of home brews. Students treat the event casually, often taking out their phones to post pictures of the academic drinking on social media. Due to University policies, students cannot drink more than 12 oz. of beer per class.

During regular class meetings, the class of about 75 listens to Parker lecture about the engineering components behind beer production. Parker gave a lengthy description of the chemical reaction behind the first step in the brewing process one day, which Siak had some difficulty with as an electrical engineer.

“The sensory things are easy, but like this chemistry stuff? I’m sure it’s super easy for all the chem E’s, but I have no idea what he’s talking about,” Siak said.

“Even my manager at the chemical company that I work with, he just brews beer on the side, too. It’s a common hobby among chemical engineers,” Wang said.

Throughout the semester, students occasionally help Parker with small portions of the process, though no beer is brewed on campus. Parker takes the class’s product home and brews the beer, which he then serves to chemical engineering graduates at commencement.

The undergraduate engineering class is just the beginning of Parker’s “five-year plan” to bring a larger brewing operation to Pitt’s campus. Eventually, Parker said he would like to see a fully functioning brewery on campus that not only engages engineering students, but also business, law, biology and chemistry students.

“Business students could come run the books, law students could deal with the legal stuff,” Parker said. “So there’s a whole educational component to having a brewery on campus.”

Parker said if Pitt were to open a brewery, engineers could use their skills to tailor beers to customers’ needs, perhaps even serving personalized beers at Pitt basketball games.

“From Pitt’s perspective, it makes sense,” he said. “Instead of ordering in, you just order it from the brewery, who design and brew it, and then bring it to your event.”

Parker is optimistic about his plan, partly because similar projects have been initiated at other schools, such as University of California, Davis and California State Polytechnic University, Pomona, both of which run functional breweries on campus.

Students, non-chemical engineers and chemical engineers alike, had positive reactions to the class. In March, several of them are going to Belgium for spring break as a part of the class’s optional study abroad trip, where they will tour Belgian breweries. The trip is open to engineering students who are taking or have taken the class, and costs $4,200.

Parker predicted this level of class enjoyment and said he wants to bring craft brewing to Pitt because of the culture it fosters.

“The people in the brewing industry are just outstanding human beings — they’re collaborative, they’re fun to be around [and] everybody wants to understand and see what’s going on,” Parker said. “It’s just a very supportive environment.”